If confirmed, these planetary candidates would be among the closest planets to their stars discovered so far.

A new planet-hunting survey has revealed planetary candidates with orbital periods as short as four hours and so close to their host stars that they are nearly skimming the stellar surface. If confirmed, these candidates would be among the closest planets to their stars discovered so far. Brian Jackson of the Carnegie Institution for Science’s Department of Terrestrial Magnetism presented his team’s findings, which are based on data from NASA’s Kepler mission, at the American Astronomical Society’s Division of Planetary Sciences meeting Tuesday. 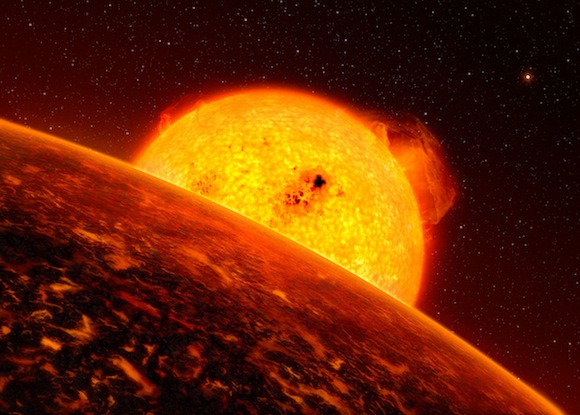 This artist’s conception from the European Southern Observatory depicts the exoplanet Corot-7b, which is so close to its Sun-like host star that it must experience extreme conditions.

Most gas giant exoplanets with orbital periods less than or equal to a few days are unstable. This is due to decay in their orbits caused by the effects of their star’s proximity. For rocky or icy planets, this disruption could bring them close enough to the star that the force of their own gravity can no longer hold them together in the face of the star’s gravity.

Motivated by these considerations, Jackson’s team conducted a search for very short-period transiting objects in the publicly available Kepler dataset. Their preliminary survey revealed about a half dozen planetary candidates, all with periods less than 12 hours. Even with masses of only a few times that of Earth, the short periods mean they might be detectable by currently operating ground-based facilities.

If confirmed, these planets would be among the shortest-period planets ever discovered, and if common, such planets would be particularly amenable to discovery by the planned TESS mission, which will look for, among other things, short-period rocky planets.

In his presentation, Jackson described the survey, what has been learned about the candidates from Kepler data, and the team’s plans for follow-up observations.