It may be possible soon to charge cell phones, change the tint on windows, or power small toys with peel-and-stick versions of solar cells.

A scientific paper, “Peel and Stick: Fabricating Thin Film Solar Cells on Universal Substrates,” appears in the online version of Scientific Reports, a subsidiary of the British scientific journal Nature.

Peel-and-stick, or water-assisted transfer printing (WTP), technologies were developed by the Stanford group and have been used before for nanowire based electronics, but the Stanford-NREL partnership has conducted the first successful demonstration using actual thin film solar cells, NREL principal scientist Qi Wang said. 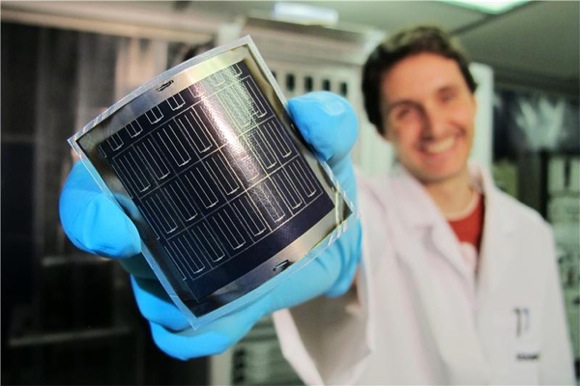 The university and NREL showed that thin-film solar cells less than one-micron thick can be removed from a silicon substrate used for fabrication by dipping them in water at room temperature. Then, after exposure to heat of about 90°C for a few seconds, they can attach to almost any surface.

NREL’s cells could be made easily on Stanford’s peel off substrate. NREL’s amorphous silicon cells were fabricated on nickel-coated Si/SiO2 wafers. A thermal release tape attached to the top of the solar cell serves as a temporary transfer holder. An optional transparent protection layer is spin-casted in between the thermal tape and the solar cell to prevent contamination when the device is dipped in water. The result is a thin strip much like a bumper sticker: the user can peel off the handler and apply the solar cell directly to a surface.

“It’s been a quite successful collaboration,” Wang said. “We were able to peel it off nicely and test the cell both before and after. We found almost no degradation in performance due to the peel-off.”

Zheng said the partnership with NREL is the key for this successful work. “NREL has years of experience with thin film solar cells that allowed us to build upon their success,” Zheng said. “Qi Wang and (NREL engineer) William Nemeth are very valuable and efficient collaborators.”

The Stanford group, led by Xiaolin Zheng, discovered a method for fabricating thin film solar cells on a rigid silicon wafer (as is traditionally done) with a layer of nickel on top (the breakthrough).

Zheng said cells can be mounted to almost any surface because almost no fabrication is required on the final carrier substrates.

The cells’ ability to adhere to a universal substrate is unusual; most thin-film cells must be affixed to a special substrate. The peel-and-stick approach allows the use of flexible polymer substrates and high processing temperatures. The resulting flexible, lightweight, and transparent devices then can be integrated onto curved surfaces such as military helmets and portable electronics, transistors and sensors.

In the future, the collaborators will test peel-and-stick cells that are processed at even higher temperatures and offer more power.