Our home galaxy, the Milky Way, makes small wobbling movements. Possible causes include the passage of a smaller galaxy through our own.

It is common knowledge that our Galaxy is permanently in motion. Being a barred spiral galaxy it rotates around the Galactic centre. It has now been discovered that our Galaxy, the Milky Way, also makes small wobbling or squishing movements. It acts like a Galactic mosh pit or a huge flag fluttering in the wind, north to south, from the Galactic plane with forces coming from multiple directions, creating a chaotic wave pattern. The source of the forces is still not understood however: possible causes include spiral arms stirring things up or ripples caused by the passage of a smaller galaxy through our own. 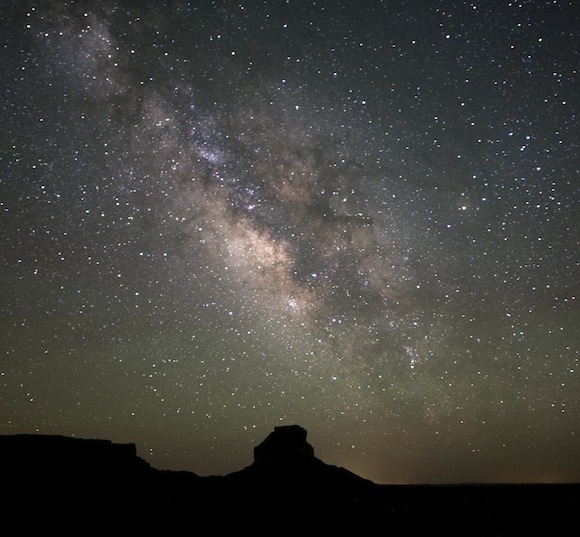 In this study, RAVE stars were used to examine the kinematics (velocities) of stars in a large, 3D region around the Sun – the region surveys 6500 light years above and below the Sun’s position as well as inwards and outwards from the Galactic centre, reaching a quarter of the way to the centre. Using a special class of stars, red clump stars, which all have about the same brightness, mean distances to the stars could be determined. This was important as then the velocities measured with RAVE, combined with other survey data, could be used to determine the full 3D velocities (up-down, in-out and rotational). The RAVE red clump giants gave an unprecedented number of stars with which it is possible to study 3D velocities in a large region around the Sun.

The 3D movement patterns obtained showed highly complex structures. The aim was then to untangle these structures, concentrating on differences between the north and south of the Galactic plane. From these velocities it was seen that our Galaxy has a lot more going on than previously thought. The velocities going upwards and downwards show that there is a wave-like behaviour, with stars sloshing in and out. The novel element in our approach was true 3D observation, showing how complex the velocity landscape of the Galaxy really is. Modellers now have the challenge of understanding this behaviour, be it from ripples from an eaten galaxy or the wake from spiral arms. These new findings will make it possible to make 3D models of our Galaxy much more precise.

The publication can be found online at https://arxiv.org/abs/1302.2468 and was published this month in Monthly Notices of the Royal Astronomical Society (MNRAS).