This dramatic new image of cosmic clouds in the constellation of Orion reveals what seems to be a fiery ribbon in the sky.

This orange glow represents faint light coming from grains of cold interstellar dust, at wavelengths too long for human eyes to see. It was observed by the ESO-operated Atacama Pathfinder Experiment (APEX) in Chile.

Clouds of gas and interstellar dust are the raw materials from which stars are made. But these tiny dust grains block our view of what lies within and behind the clouds — at least at visible wavelengths — making it difficult to observe the processes of star formation. 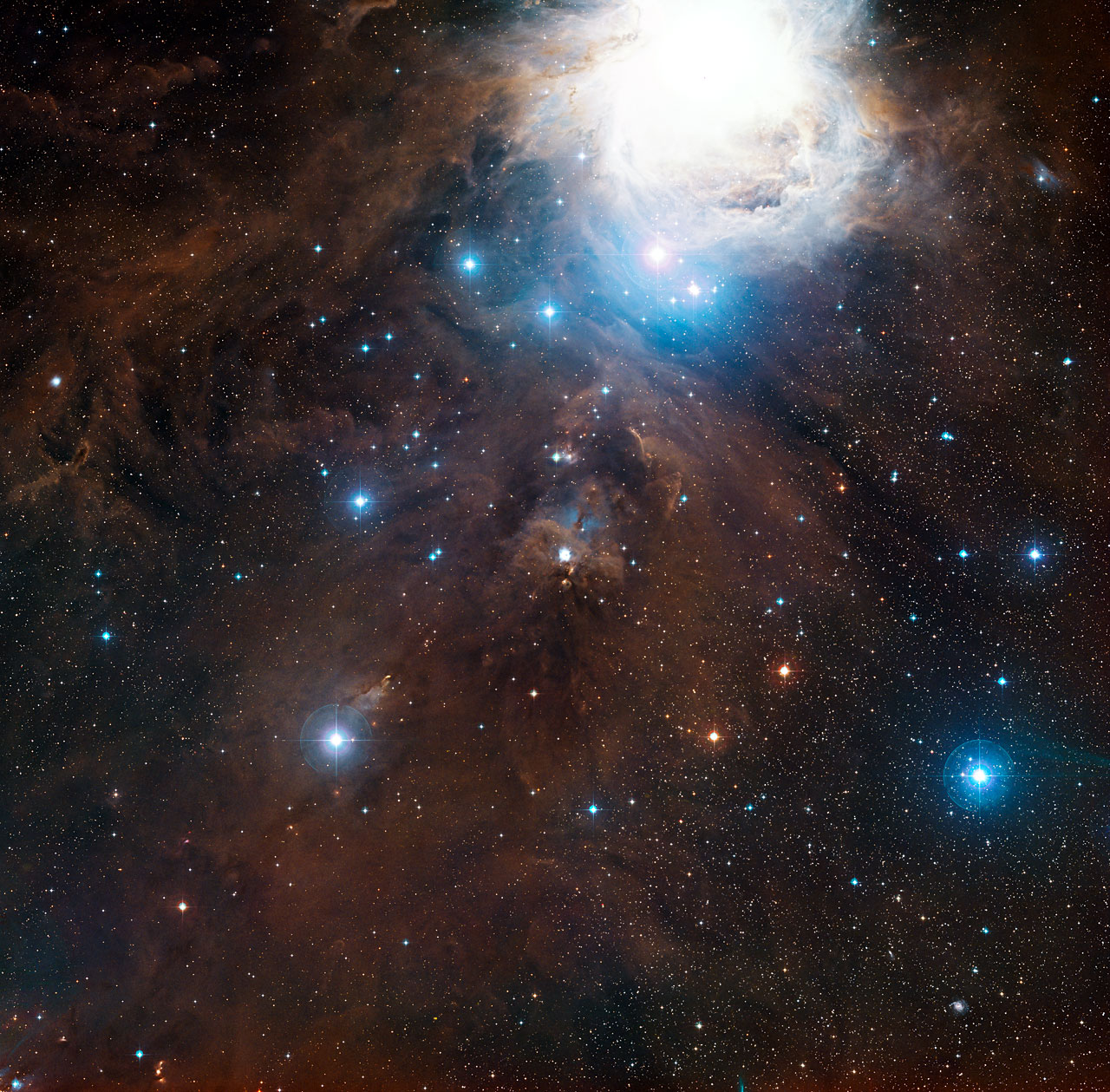 View Larger | This wide-field view shows a region of sky in the famous constellation of Orion (The Hunter), as seen in visible light. The large, bright feature at the top of the image is the well-known Orion Nebula (Messier 42). This view was created from images forming part of the Digitized Sky Survey 2.

This is why astronomers need to use instruments that are able to see at other wavelengths of light. At submillimetre wavelengths, rather than blocking light, the dust grains shine due to their temperatures of a few tens of degrees above absolute zero [1]. The APEX telescope with its submillimetre-wavelength camera LABOCA, located at an altitude of 5000 metres above sea level on the Chajnantor Plateau in the Chilean Andes, is the ideal tool for this kind of observation.

This spectacular new picture shows just a part of a bigger complex called the Orion Molecular Cloud, in the constellation of Orion (The Hunter). A rich melting pot of bright nebulae, hot young stars and cold dust clouds, this region is hundreds of light-years across and located about 1350 light-years from us. The submillimetre-wavelength glow arising from the cold dust clouds is seen in orange in this image and is overlaid on a view of the region taken in the more familiar visible light. 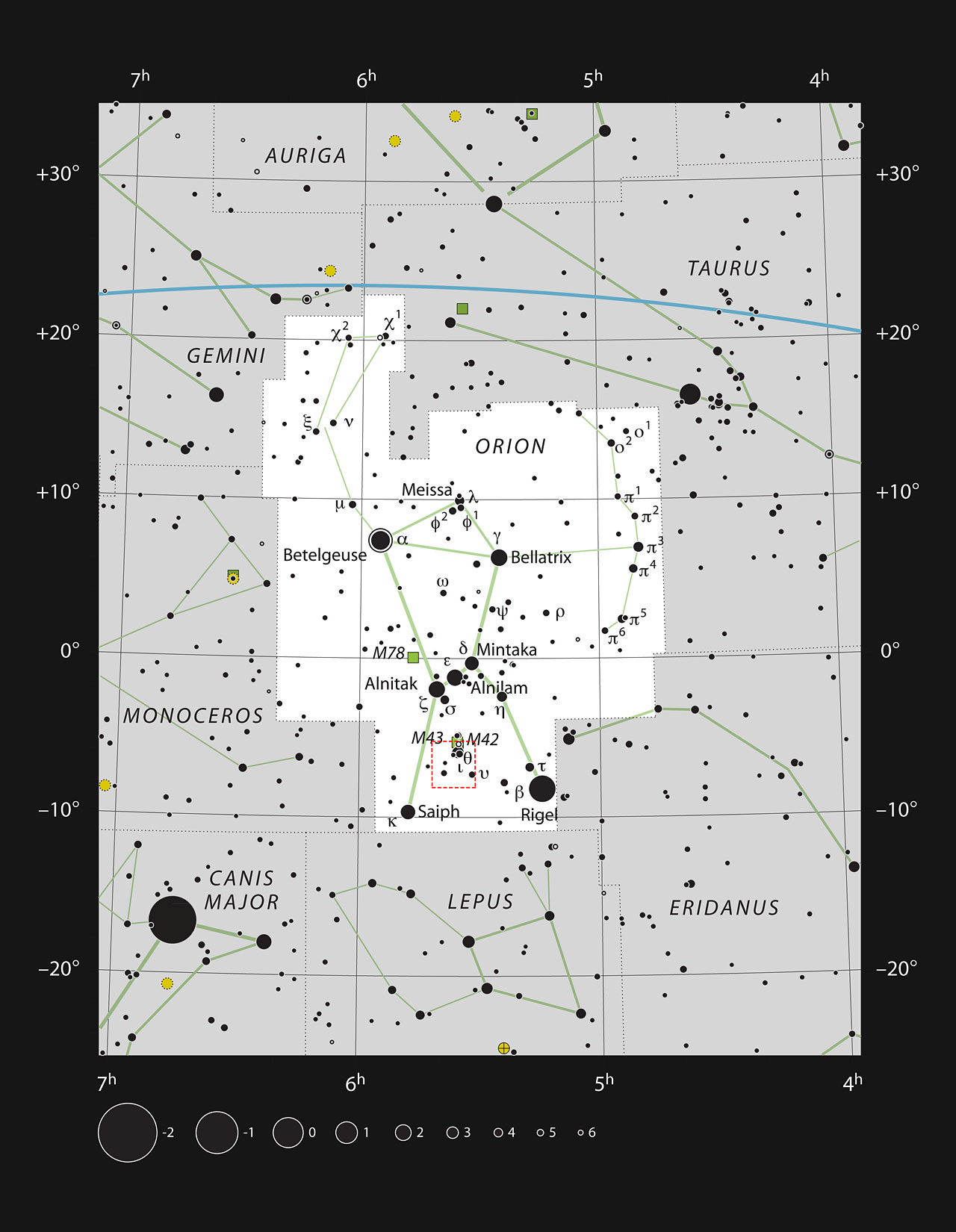 View Larger | This chart shows the famous constellation of Orion (The Hunter). This map shows most of the stars visible to the unaided eye under good conditions, and the region shown in a spectacular new image from the ESO-operated Atacama Pathfinder Experiment (APEX) in Chile is highlighted with a red square on the image.

The large bright cloud in the upper right of the image is the well-known Orion Nebula, also called Messier 42. It is readily visible to the naked eye as the slightly fuzzy middle “star” in the sword of Orion. The Orion Nebula is the brightest part of a huge stellar nursery where new stars are being born, and is the closest site of massive star formation to Earth.

The dust clouds form beautiful filaments, sheets, and bubbles as a result of processes including gravitational collapse and the effects of stellar winds. These winds are streams of gas ejected from the atmospheres of stars, which are powerful enough to shape the surrounding clouds into the convoluted forms seen here. 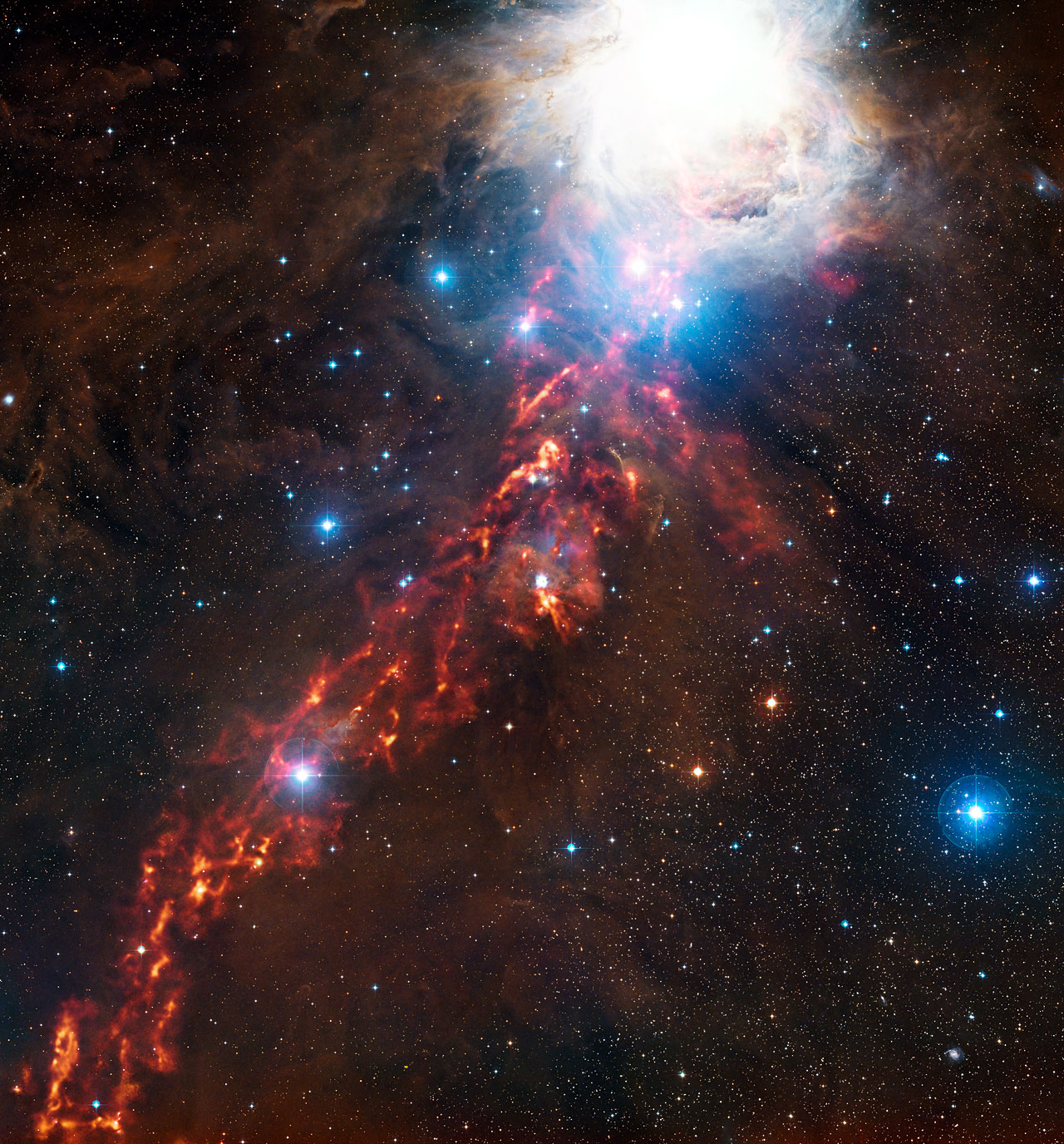 View Larger | This dramatic new image of cosmic clouds in the constellation of Orion reveals what seems to be a fiery ribbon in the sky. The orange glow represents faint light coming from grains of cold interstellar dust, at wavelengths too long for human eyes to see.

Astronomers have used these and other data from APEX along with images from ESA’s Herschel Space Observatory, to search the region of Orion for protostars — an early stage of star formation. They have so far been able to identify 15 objects that appeared much brighter at longer wavelengths than at shorter wavelengths. These newly discovered rare objects are probably among the youngest protostars ever found, bringing astronomers closer to witnessing the moment when a star begins to form.
Notes