A team of astronomers has combined new observations with existing data to reveal a solar system packed full of planets.

The star Gliese 667C is orbited by between five and seven planets, the maximum number that could fit in stable, close orbits. A record-breaking three of these planets are super-Earths found in the so-called habitable zone around the star—the zone where liquid water could exist. This makes them good candidates for the search for life.

Gliese 667C is a very well-studied star. It is just over one third of the mass of our Sun, and it is part of a triple star system known as Gliese 667. Gliese 667 is remarkably similar to our solar system, compared to other stars studied in the search for habitable planets.

Artist’s conception of the seven planets possibly found orbiting Gliese 667C. Three of them (c, f and e) orbit within the habitable zone of the star. Image is courtesy of Rene Heller

Previous studies of Gliese 667C found that the star hosts three planets, with one in the habitable zone. Now, a team of astronomers led by Guillem Anglada-Escudé of the University of Göttingen, a former Carnegie post-doc, reexamined observations taken between 2003 and 2012, along with new observations from a variety of telescopes, and found evidence for five, and possibly as many as seven, planets around the star.

If seven planets exist, they would completely fill the habitable zone; there are no more stable, long-lived orbits in which a planet could be so close to the star. Because Gliese 677C is part of a triple-star system, the other orange stars would be visible in daytime on each of these planets, and in nighttime they would provide the same illumination as the full moon on earth.

“We identified three strong signals in the star before, but it was possible that smaller planets were hidden in the data” said Anglada-Escudé. “We reexamined the existing data, added some new observations, and applied two different data analysis methods especially designed to deal with multi-planet signal detection. Both methods yielded the same answer: there are five very secure signals and up to seven low-mass planets in short-period orbits around the star.”

Three of these planets are confirmed to be super-Earths—planets more massive than Earth, but less massive than giant planets like Uranus or Neptune—which are within the star’s habitable zone.

“This is the first time that three such planets have been spotted orbiting in this zone in the same system,” Butler said. 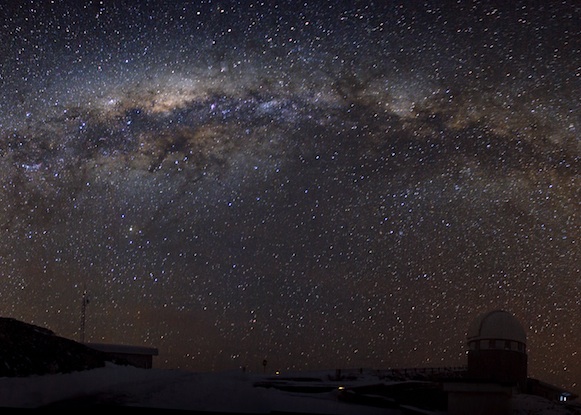 Compact systems around Sun-like stars have been found to be abundant in the Milky Way.
However, many of these systems consist of super-Earths lying very close to their star, within the orbit of Mercury. In systems built around Sun-like stars, these orbits are very hot and planets there are unlikely to be habitable.

This is not the case for cooler and dimmer stars Planets found very close to such stars could still be habitable planet candidates. The Gliese 667C system is the first example of a system in which a low-mass star is seen to host several packed planets with habitable conditions.

This discovery illustrates that low-mass stars are currently the best targets for searching for potentially habitable planets, an important finding given that around 80% of the stars in our Milky Way galaxy, and many stars near to us, fall into this lower mass bracket. If such packed systems are common around low-mass stars, the number of potentially habitable planets in our galaxy could be much larger than previously expected.

The team came to its conclusions by digging into previous data from the High Accuracy Radial velocity Planet Searcher (HARPS) at the European Southern Observatory’s 3.6-metre telescope in Chile, the Carnegie Planet Finder Spectrograph (PFS) at the 6.5-metre Magellan II Telescope at the Las Campanas Observatory in Chile, and the HIRES spectrograph mounted on the Keck 10-metre telescope on Mauna Kea, Hawaii. Spectra taken using the UVES spectrograph on ESO’s Very Large Telescope in Chile were used to fine tune the properties of the star accurately.