An international team of scientists has definitively measured the spin rate of a supermassive black hole for the first time.

The findings, made by the two X-ray space observatories, NASA’s Nuclear Spectroscopic Telescope Array (NuSTAR) and the European Space Agency’s XMM-Newton, solve a long-standing debate about similar measurements in other black holes and will lead to a better understanding of how black holes and galaxies evolve.

“We can trace matter as it swirls into a black hole using X-rays emitted from regions very close to the black hole,” said Fiona Harrison, NuSTAR principal investigator at the California Institute of Technology, Pasadena, and coauthor of a new study appearing in the Feb. 28 edition of Nature. “The radiation we see is warped and distorted by the motions of particles, and by the black hole’s incredibly strong gravity.” 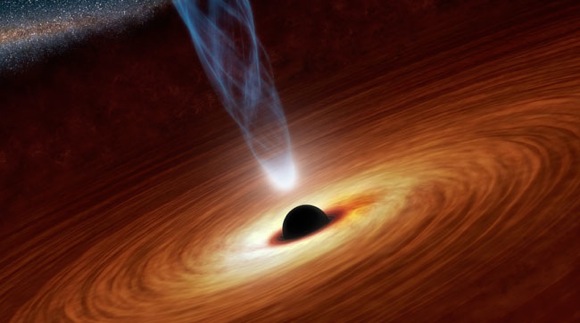 The observations also are a powerful test of Einstein’s theory of general relativity, which holds that gravity can bend light and space-time. The X-ray telescopes detected these warping effects in the most extreme of environments, where the immense gravity field of a black hole is severely altering space-time.

NuSTAR, a NASA Explorer-class mission launched in June of 2012, is uniquely designed to detect the highest-energy X-ray light in great detail. For Livermore, the predecessor to NuSTAR was a balloon-borne instrument known as HEFT (the High Energy Focusing Telescope) that was funded, in part, by a Laboratory Directed Research and Development investment beginning in 2001. NuSTAR takes HEFT’s X-ray focusing abilities and sends them beyond Earth’s atmosphere on a satellite. The optics design and the manufacturing process for NuSTAR are based on those used to build the HEFT telescopes.

NuSTAR complements telescopes that observe lower-energy X-ray light, such as the European Space Agency’s (ESA’s) XMM-Newton and NASA’s Chandra X-ray Observatory. Scientists use these and other telescopes to estimate the rates at which black holes spin.

“We know that black holes have a strong link to their host galaxy,” said astrophysicist Bill Craig, a member of the LLNL team. “Measuring the spin, one of the few things we can directly measure from a black hole, will give us clues to understanding this fundamental relationship.”

The team used NuSTAR to observe X-rays emitted by hot gas in a disc just outside the “event horizon,” the boundary surrounding a black hole beyond which nothing, including light, can escape. 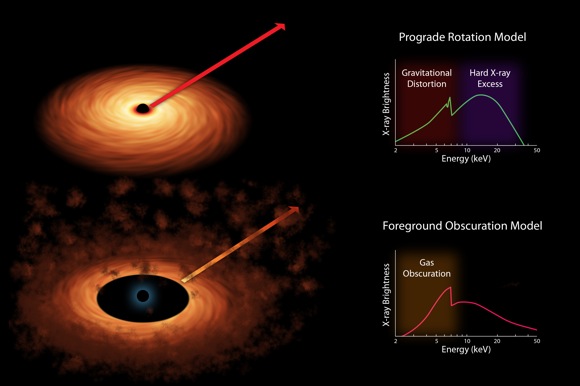 Scientists measure the spin rates of supermassive black holes by spreading the X-ray light into different colors. The light comes from accretion disks that swirl around black holes, as shown in both of the artist’s concepts. They use X-ray space telescopes to study these colors, and, in particular, look for a “fingerprint” of iron — the peak shown in both graphs, or spectra — to see how sharp it is. The “rotation” model shown at top held that the iron feature was being spread out by distorting effects caused by the immense gravity of the black hole. If this model were correct, then the amount of distortion seen in the iron feature should reveal the spin rate of the black hole. The alternate model held that obscuring clouds lying near the black hole were making the iron line appear artificially distorted. If this model were correct, the data could not be used to measure black hole spin.NuSTAR helped to solve the case, ruling out the alternate “obscuring cloud” model. Image courtesy of NASA/JPL-Caltech.

“This is hugely important to the field of black hole science,” said Lou Kaluzienski, NuSTAR program scientist at NASA Headquarters in Washington, D.C. “NASA and ESA telescopes tackled this problem together. In tandem with the lower-energy X-ray observations carried out with XMM-Newton, NuSTAR’s unprecedented capabilities for measuring the higher energy X-rays provided an essential, missing puzzle piece for unraveling this problem.”

NuSTAR and XMM-Newton simultaneously observed the two-million-solar-mass supermassive black hole lying at the dust and gas-filled heart of a galaxy called NGC 1365. The results showed that the black hole is spinning close to the maximal rate allowed by Einstein’s theory of gravity.

“These monsters, with masses from millions to billions of times that of the sun, are formed as small seeds in the early universe and then grow by swallowing stars and gas in their host galaxies, and/or merging with other giant black holes when galaxies collide,” said Guido Risaliti, lead author of the new study from the Harvard-Smithsonian Center for Astrophysics in Cambridge, Mass. and the Italian National Institute for Astrophysics. “Measuring the spin of a supermassive black hole is fundamental to understanding its past history and that of its host galaxy.”