Engineers have developed a novel wireless, broadband, rechargeable, fully implantable brain sensor that has performed well in animal models for more than a year.

A team of neuroengineers based at Brown University has developed a fully implantable and rechargeable wireless brain sensor capable of relaying real-time broadband signals from up to 100 neurons in freely moving subjects. Several copies of the novel low-power device, described in the Journal of Neural Engineering, have been performing well in animal models for more than year, a first in the brain-computer interface field. Brain-computer interfaces coud help people with severe paralysis control devces with their thoughts.

Arto Nurmikko, professor of engineering at Brown University who oversaw the device’s invention, is presenting it this week at the 2013 International Workshop on Clinical Brain-Machine Interface Systems in Houston.

“This has features that are somewhat akin to a cell phone, except the conversation that is being sent out is the brain talking wirelessly,” Nurmikko said. 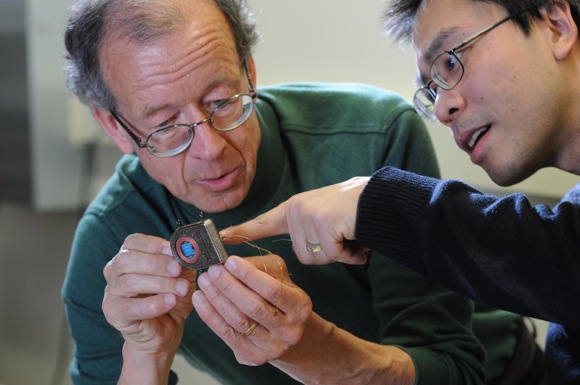 Neuroscientists can use such a device to observe, record, and analyze the signals emitted by scores of neurons in particular parts of the animal model’s brain.

Meanwhile, wired systems using similar implantable sensing electrodes are being investigated in brain-computer interface research to assess the feasibility of people with severe paralysis moving assistive devices like robotic arms or computer cursors by thinking about moving their arms and hands.

This wireless system addresses a major need for the next step in providing a practical brain-computer interface,” said neuroscientist John Donoghue, the Wriston Professor of Neuroscience at Brown University and director of the Brown Institute for Brain Science.

In the device, a pill-sized chip of electrodes implanted on the cortex sends signals through uniquely designed electrical connections into the device’s laser-welded, hermetically sealed titanium “can.” The can measures 2.2 inches (56 mm) long, 1.65 inches (42 mm) wide, and 0.35 inches (9 mm) thick. That small volume houses an entire signal processing system: a lithium ion battery, ultralow-power integrated circuits designed at Brown for signal processing and conversion, wireless radio and infrared transmitters, and a copper coil for recharging — a “brain radio.” All the wireless and charging signals pass through an electromagnetically transparent sapphire window.

In all, the device looks like a miniature sardine can with a porthole.

But what the team has packed inside makes it a major advance among brain-machine interfaces, said lead author David Borton, a former Brown graduate student and postdoctoral research associate who is now at Ecole Polytechnique Federale Lausanne in Switzerland.

“What makes the achievement discussed in this paper unique is how it integrated many individual innovations into a complete system with potential for neuroscientific gain greater than the sum of its parts,” Borton said. “Most importantly, we show the first fully implanted microsystem operated wirelessly for more than 12 months in large animal models — a milestone for potential [human] clinical translation.”

The device transmits data at 24 Mbps via 3.2 and 3.8 Ghz microwave frequencies to an external receiver. After a two-hour charge, delivered wirelessly through the scalp via induction, it can operate for more than six hours.

“The device uses less than 100 milliwatts of power, a key figure of merit,” Nurmikko said. 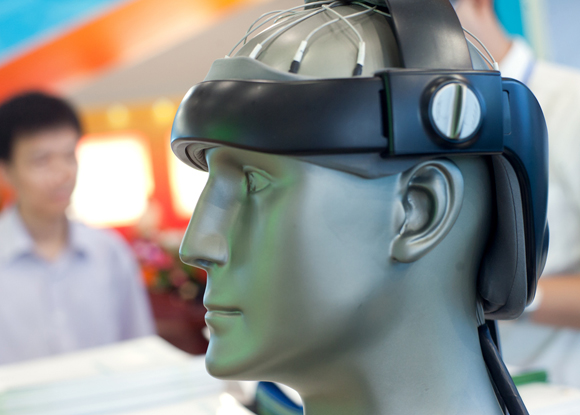 Co-author Ming Yin, a Brown postdoctoral scholar and electrical engineer, said one of the major challenges that the team overcame in building the device was optimizing its performance given the requirements that the implant device be small, low-power and leak-proof, potentially for decades.

“We tried to make the best tradeoff between the critical specifications of the device, such as power consumption, noise performance, wireless bandwidth and operational range,” Yin said. “Another major challenge we encountered was to integrate and assemble all the electronics of the device into a miniaturized package that provides long-term hermeticity (water-proofing) and biocompatibility as well as transparency to the wireless data, power, and on-off switch signals.”

With early contributions by electrical engineer William Patterson at Brown, Yin helped to design the custom chips for converting neural signals into digital data. The conversion has to be done within the device, because brain signals are not produced in the ones and zeros of computer data.

The team worked closely with neurosurgeons to implant the device in three pigs and three rhesus macaque monkeys. The research in these six animals has been helping scientists better observe complex neural signals for as long as 16 months so far. In the new paper, the team shows some of the rich neural signals they have been able to record in the lab. Ultimately this could translate to significant advances that can also inform human neuroscience.

Current wired systems constrain the actions of research subjects, Nurmikko said. The value of wireless transmission is that it frees subjects to move however they intend, allowing them to produce a wider variety of more realistic behaviors. If neuroscientists want to observe the brain signals produced during some running or foraging behaviors, for instance, they can’t use a cabled sensor to study how neural circuits would form those plans for action and execution or strategize in decision making.

In the experiments in the new paper, the device is connected to one array of 100 cortical electrodes, the microscale individual neural listening posts, but the new device design allows for multiple arrays to be connected, Nurmikko said. That would allow scientists to observe ensembles of neurons in multiple related areas of a brain network.

The new wireless device is not approved for use in humans and is not used in clinical trials of brain-computer interfaces. It was designed, however, with that translational motivation.

“This was conceived very much in concert with the larger BrainGate* team, including neurosurgeons and neurologists giving us advice as to what were appropriate strategies for eventual clinical applications,” said Nurmikko, who is also affiliated with the Brown Institute for Brain Science.

Borton is now spearheading the development of a collaboration between EPFL and Brown to use a version of the device to study the role of the motor cortex in an animal model of Parkinson’s disease.

Meanwhile the Brown team is continuing work on advancing the device for even larger amounts of neural data transmission, reducing its size even further, and improving other aspects of the device’s safety and reliability so that it can someday be considered for clinical application in peop0le with movement disabilities.