Bremerhaven, 8 June 2012, The North-East Passage, the sea route along the North coast of Russia, is expected to be free of ice early again this summer. The forecast was made by sea ice physicists of the Alfred Wegener Institute for Polar and Marine Research in the Helmholtz Association based on a series of measurement flights over the Laptev Sea, a marginal sea of the Arctic Ocean. Amongs experts the shelf sea is known as an “ice factory” of Arctic sea ice. At the end of last winter the researchers discovered large areas of thin ice not being thick enough to withstand the summer melt. 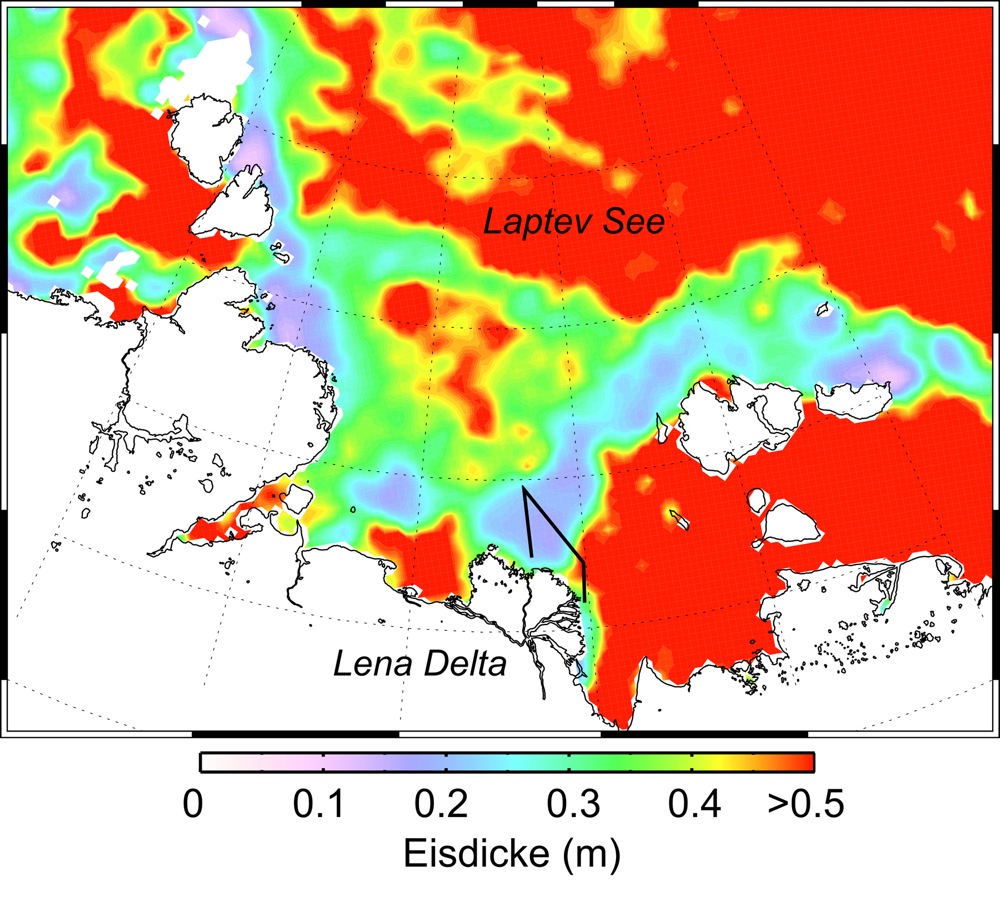 Sea ice thickness in the Laptev Sea at the end of the previous winter (April 20, 2012): The sea ice thickness was determined with the SMOS (Soil Moisture Ocean Saliniy) satellite that can resolve ice thicknesses up to 50 centimetres. The black line shows the mission’s flight track. SMOS-data: Lars Kaleschke, KlimaCampus, Hamburg University

“These results were a great surprise to us“, says expedition member Dr. Thomas Krumpen. In previous measurements in the winter of 2007/2008 the ice in the same area had been up to one metre thicker. In his opinion these clear differences are primarily attributable to the wind: “It behaves differently from year to year. If, as last winter, the wind blows from the mainland to the sea, it pushes the pack ice from the Laptev Sea towards the North. Open water areas, so-called polynyas, develop in this way before the coast. Their surface water naturally cools very quickly at an air temperature of minus 40 degrees. New thin ice forms and is then immediately swept away again by the wind. In view of this cycle, differently sized areas of thin ice then develop on the Laptev Sea depending on wind strength and continuity“, explains Thomas Krumpen.

However, the expedition team was unaware of just how large these areas can actually become until they made the measurement flights in March and April of this year. In places the researchers flew over thin ice for around 400 kilometres. The “EM Bird”, the torpedo-shaped, electromagnetic ice thickness sensor of the Alfred Wegener Institute, was hung on a cable beneath the helicopter. It constantly recorded the thickness of the floating ice. “We now have a unique data set which we primarily want to use to check the measurements of the earth investigation satellite SMOS“, says Thomas Krumpen.

The abbreviation SMOS (Soil Moisture and Ocean Salinity) is actually a satellite mission to determine the soil moisture of the mainland and salinity of the oceans. However, the satellite of the European Space Agency (ESA) can also be used to survey the Arctic sea ice. “The satellite can be used above all to detect thin ice areas, as we have seen them, from space“, explains Thomas Krumpen.

The SMOS satellite measurements from March and April of this year confirm that the thin ice areas discovered by the expedition team were no locally restricted phenomenon: “A large part of the North-East Passage was characterised by surprisingly thin ice at the end of the winter“, says Thomas Krumpen. 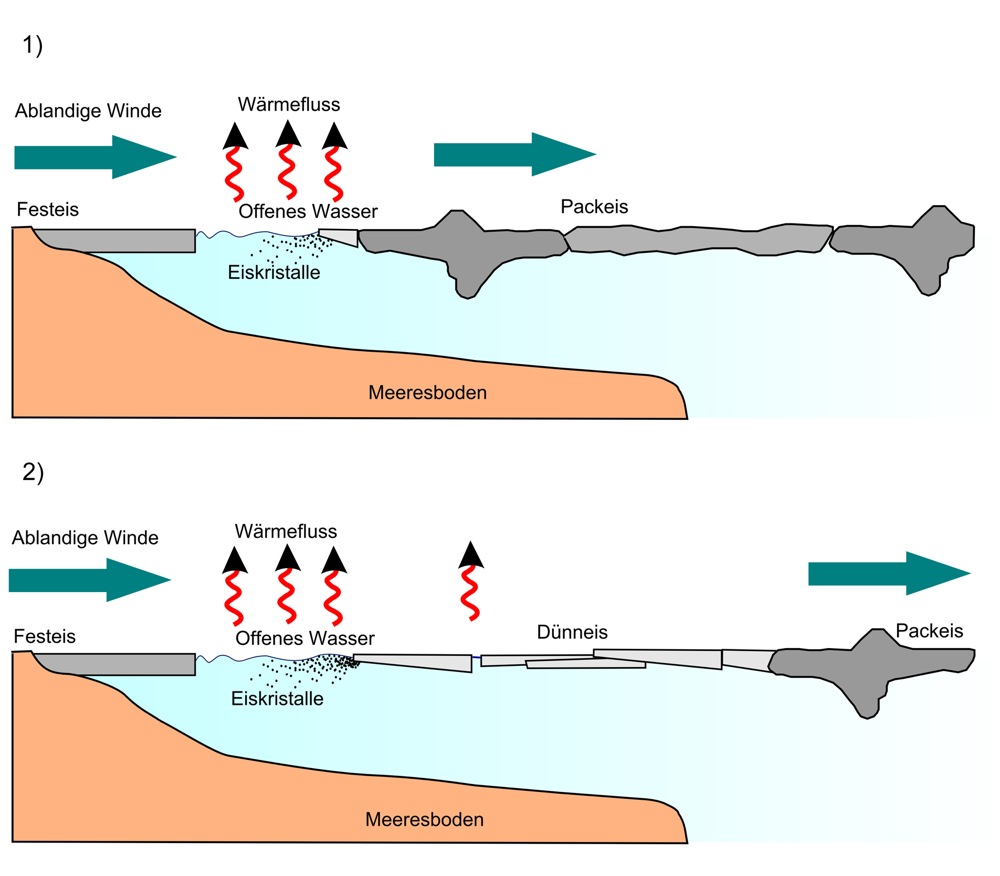 Schematic drawing of a polynya in the Laptev Sea: The freely drifting pack ice is pushed away from the fast ice by offshore winds. Inside the formed open water areas frazil ice is produced that consolidates at the pack ice edge and forms a new layer of thin ice. The newly formed ice is later on exported into the central Arctic Ocean. Graphic: Thomas Krumpen, Alfred Wegener Institute

The new findings of the successful winter expedition give cause for concern to the scientists: “These huge new areas of thin ice will be the first to disappear when the ice melts in summer. And if the thin ice melts as quickly as we presume, the Laptev Sea and with it a part of the North-East Passage will be free from ice comparatively early this summer“, explains the sea ice physicist.

In the past the Laptev Sea was always covered with sea ice from October to the end of the following July and was navigable for a maximum of two summer months. In 2011 the ice had retracted so far by the third week of July that during the course of the summer 33 ships were able to navigate the Arctic waters of Russia for the first time. The North-East Passage is viewed by shipping companies to be a time and fuel saving alternative to the conventional Europe-Asia route. The connection from Rotterdam to Japanese Yokohama via the Nord-East Passage is some 3800 sea miles shorter than taking the Suez Canal and Indian Ocean route.

Republished with permission from the Alfred Wegener Institute.