Seals sleep with only half their brain at a time, says study

A new study led by an international team of biologists has identified some of the brain chemicals that allow seals to sleep with half of their brain at a time.

The study was published this month in the Journal of Neuroscience and was headed by scientists at UCLA and the University of Toronto. It identified the chemical cues that allow the seal brain to remain half awake and asleep. Findings from this study may explain the biological mechanisms that enable the brain to remain alert during waking hours and go off-line during sleep.

“Seals do something biologically amazing — they sleep with half their brain at a time. The left side of their brain can sleep while the right side stays awake. Seals sleep this way while they’re in water, but they sleep like humans while on land. Our research may explain how this unique biological phenomenon happens” said Professor John Peever of the University of Toronto. 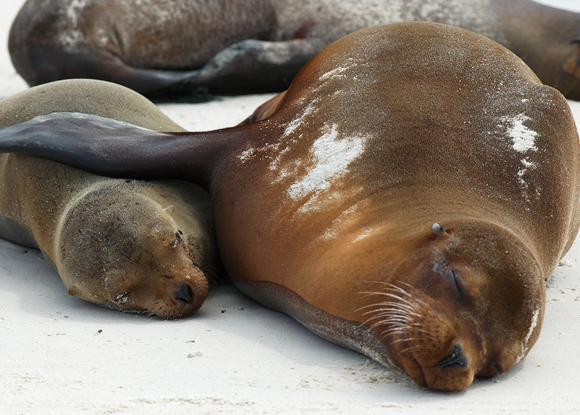 The study’s first author, University of Toronto PhD student Jennifer Lapierre, made this discovery by measuring how different chemicals change in the sleeping and waking sides of the brain. She found that acetylcholine – an important brain chemical – was at low levels on the sleeping side of the brain but at high levels on the waking side. This finding suggests that acetylcholine may drive brain alertness on the side that is awake.

But, the study also showed that another important brain chemical – serotonin – was present at the equal levels on both sides of the brain whether the seals were awake or asleep. This was a surprising finding because scientist long thought that serotonin was a chemical that causes brain arousal.

These findings have possible human health implications because “about 40% of North Americans suffer from sleep problems and understanding which brain chemicals function to keep us awake or asleep is a major scientific advance. It could help solve the mystery of how and why we sleep” says the study’s senior author Jerome Siegel of UCLA’s Brain Research Institute.