A new study released this week confirms that lions are rapidly and literally losing ground across Africa’s once-thriving savannahs due to burgeoning human population growth and subsequent, massive land-use conversion. Representing the most comprehensive assessment of the state and vitality of African savannah habitat to date, the report maintains that the lion has lost 75% of its original natural habitat in Africa – a reduction that has devastated lion populations across the continent. 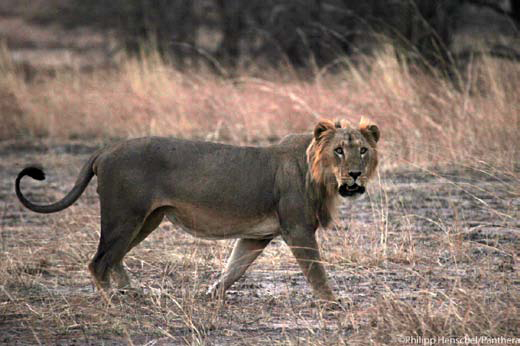 Co-authored by Panthera’s Lion Program Survey Coordinator, Dr. Philipp Henschel, and a team of researchers coordinated by Duke University’s Nicholas School of the Environment, this report, entitled The size of savannah Africa: A lion’s (Panthera leo) view, was published online this week in the journal ‘Biodiversity and Conservation.’

Using Google Earth’s high-resolution satellite imagery, the study examined savannah habitat across Africa, which comprises the majority of the lion’s current range, and also analyzed human population density data to identify areas of suitable habitat currently occupied by lions. Incredibly, the analysis identified only 67 isolated regions across the continent where significant lion populations may persist. Of these areas, just 15 were estimated to maintain a population of at least 500 lions.

“The reality is that from an original area a third larger than the continental United States, only 25% remains,” explained Stuart Pimm, co-author and Doris Duke Chair of Conservation at Duke University.

The study also confirms that in West Africa, where the species is classified as Regionally Endangered on the IUCN Red List of Threatened Species, fewer than 500 lions remain, scattered across eight isolated regions.

“Lions have been hit hardest in West Africa, where local governments often lack direct incentives to protect them,” Dr. Henschel commented. “While lions generate billions of tourist dollars across Eastern and Southern Africa, spurring governments to invest in their protection, wildlife-based tourism is only slowly developing in West Africa. Currently lions still have little economic value in the region, and West African governments will require significant foreign assistance in stabilizing remaining populations until sustainable local conservation efforts can be developed.”

Earlier this year, Panthera became a scientific and strategic collaborator on the National Geographic Society’s Big Cats Initiative (BCI) to jointly address the most serious threats facing big cats in the wild and facilitate the direction of financial support to the most efficient and impactful conservation programs. Since then, with the support of the BCI, Panthera’s Lion Program Survey Coordinator, Dr. Henschel, has conducted a survey of West Africa’s last lion stronghold, the tri-national W-Arly-Pendjari Complex (located in Benin, Burkina Faso, and Niger), whose findings will be soon published.

Panthera also recently assessed the status of lion populations in all critical conservation areas of West Africa, and is currently involved in the development of a lion conservation strategy for the W-Arly-Pendjari Complex.