A new camera on a telescope at Kitt Peak National Observatory near Tucson has given us this beautiful view of the Whirlpool, which is also called M51.

The Whirlpool Galaxy (Messier 51) has been a popular night sky target for astronomers for centuries. Charles Messier first identified it in 1773 and listed it as number 51 in his catalog. To him, it looked like a faint, fuzzy object that might be a comet. William Parsons, the 3rd Earl of Rosse, used his 72-inch telescope “Leviathan” to observe the Whirlpool in 1845. Since then, Messier 51 has likely been targeted by virtually every telescope in the northern hemisphere. It is found in the constellation Canes Venatici (the Hunting Dogs) and is a classic example of a spiral galaxy. 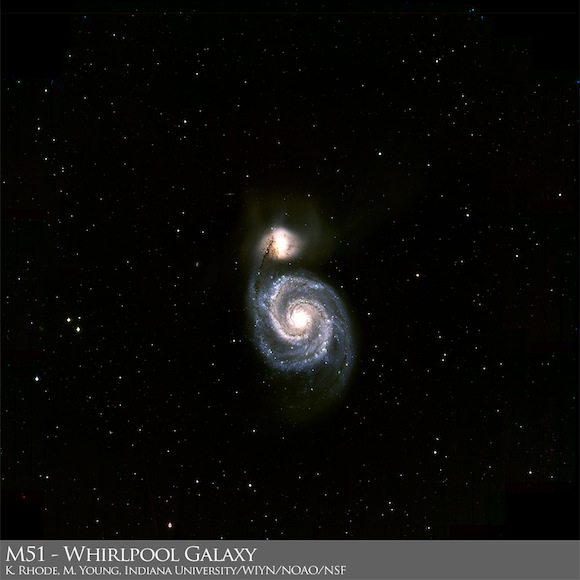 Now, a new camera on the WIYN 3.5-meter telescope at Kitt Peak National Observatory has imaged the Whirlpool Galaxy anew. The wide field of the One Degree Imager (ODI) camera makes it possible to capture the entire galaxy and its companion in one pointing, something that even the Hubble Space Telescope cannot do.

Indiana University (IU) astronomy professor Katherine Rhode led this effort as part of an imaging survey of spiral and elliptical galaxies. The survey is aimed at understanding how these so-called “giant galaxies” form and evolve.

“The WIYN telescope is an ideal telescope for the survey because of its wide field and because it produces some of the sharpest, highest-quality images possible with a ground-based telescope,” explained Rhode. “WIYN’s 3.5-meter mirror is also very efficient at gathering light from astronomical objects, so it allows us to image faint objects, like individual star clusters within the galaxies.” 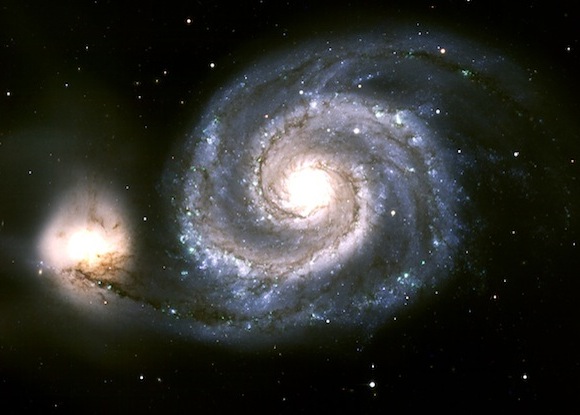 This new image, as well as over one thousand others, can be found on the National Optical Astronomy Observatory (NOAO) image gallery: https://www.noao.edu/image_gallery

The gallery contains images taken with all the telescopes supported by NOAO, selected videos, and pictures of telescopes and instruments.

An important consideration for imaging with ground-based telescopes is what astronomers refer to as “seeing,” and most people think of as stars twinkling. Twinkling is caused by movement of air in the Earth’s atmosphere, and it can be minimized at a good telescope site, like on a mountaintop in a dry climate. As WIYN Interim Director Dr. Eric Hooper said, “The WIYN telescope on Kitt Peak is known for producing excellent, steady images with high resolution, or sharpness.”

The WIYN ODI camera spent about an hour observing M51 through three different filters: blue, green, and red. These digital images were later combined to construct a “true-color” image: redder objects in the image are cooler, emitting most of their light at longer optical wavelengths, while bluer objects in the image are bluer and hotter in reality. Objects that glow green are somewhere in between. Even though the galaxy is almost 30 million light-years away, the image clearly shows clusters of young, hot stars that light up the spiral arms. Threaded through the arms are dark “dust lanes,” where sooty material left over from previous generations of stars has settled. More dust lanes can be seen in the bridge of luminous stars and gas that connects Messier 51 to its companion, the peculiar galaxy NGC 5195, in the upper part of the image. 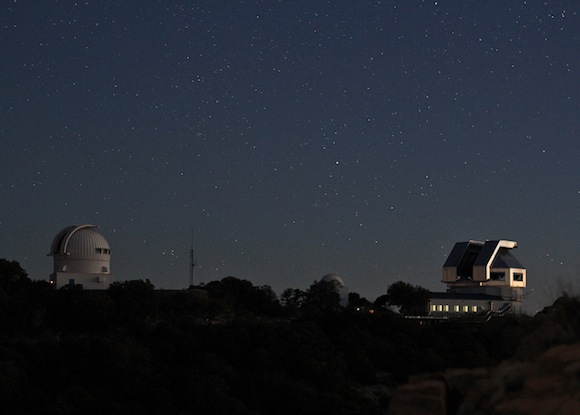 The images were taken by Dr. Rhode in May 2013 and then processed by the ODI Portal, Pipeline, and Archive (ODI-PPA) project team at IU. The ODI-PPA project is a collaboration between IU’s Pervasive Technology Institute (PTI), the Science Data Management group at NOAO, and WIYN. Arvind Gopu, ODI-PPA project manager, noted: “When requested by a pipeline operator, ODI data are processed and archived using NSF-funded cyberinfrastructure located at IU. In the case of the M51 images, our lead developer Michael Young ran the raw images through the calibration pipeline and used that data to make the final true-color images.”