Researchers have invented a circuit that makes it possible to test whether food inside packaging is still safe to eat. This development should drastically reduce the amount of edible food which is wasted every day.

Millions of tons of food are thrown away each year because the ‘best before’ date has passed. But this date is always a cautious estimate, which means a lot of still-edible food is thrown away. Wouldn’t it be handy if the packaging could ‘test’ whether the contents are still safe to eat? Researchers at Eindhoven University of Technology, Universitá di Catania, CEA-Liten and STMicroelectronics have invented a circuit that makes this possible: a plastic analog–digital converter. This development brings plastic sensor circuits costing less than one euro cent within reach. Beyond food, these ultra-low-cost plastic circuits have numerous potential uses, including, pharmaceuticals. The invention was presented last week at the ISSCC in San Francisco, the world’s most important conference on solid-state circuits. 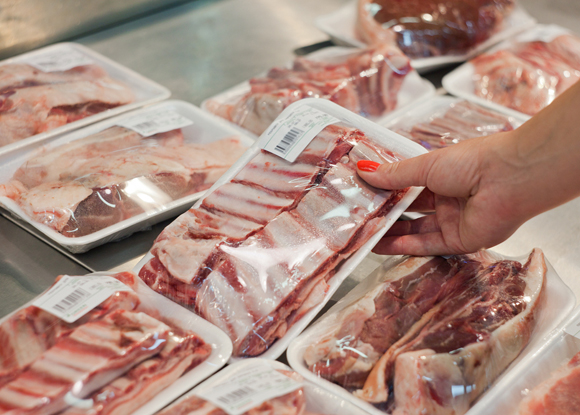 Consumers and businesses in developed countries throw away around 100 kilograms of food per person(*), mainly because the ‘best before’ date on the packaging has passed. That waste is bad for consumers’ budgets and for the environment. Much of this wastage results from the difficulty in estimating how long food will stay usable. To minimize the risk of selling spoiled food to consumers, producers show a relatively short shelf life on their packaging.

Less than one cent

To fight food waste, producers could include an electronic sensor circuit in their packaging to monitor the acidity level of the food, for example. The sensor circuit could be read with a scanner or with your mobile phone to show the freshness of your steak, or whether your frozen food was defrosted. Researcher Eugenio Cantatore of Eindhoven University of Technology (TU/e): “In principle that’s all already possible, using standard silicon ICs. The only problem is they’re too expensive. They easily cost ten cents. And that cost is too much for a one euro bag of crisps. We’re now developing electronic devices that are made from plastic rather than silicon. The advantage is you can easily include these plastic sensors in plastic packaging.” The plastic semiconductor can even be printed on all kinds of flexible surfaces, which makes it cheaper to use. And it makes sensor circuits costing less than one eurocent achievable. 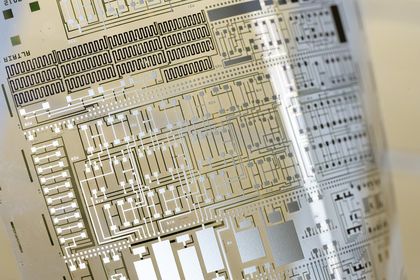 The plastic analog-to-digital converter (ADC). The ADC shown is still relatively large, in its final form it will be smaller. Photo: Bart van Overbeeke.

The researchers have succeeded in making two different plastic ADCs (analog-to-digital converters). Each converts analog signals, such as the output value measured by a sensor, into digital form. One of these new devices is the very first printed ADC ever made. “This paves the way toward large area sensors on plastic films in a cost-effective way through printing manufacturing approaches”, says Isabelle Chartier, Printed Electronics Business developer at CEA-Liten. The ISSCC rated the papers on these inventions as highlights of the conference.

The new plastic ADCs bring applications in the food and pharmaceuticals industries within reach. A sensor circuit consists of four components: the sensor, an amplifier, an ADC to digitize the signal and a radio transmitter that sends the signal to a base station. The plastic ADC has been the missing link; the other three components already exist. ”Now that we have all of the pieces, we need the integration,” says Cantatore. He expects that it will still take at least five years before we can expect to see the new devices on supermarket shelves. Other potential applications are in pharmaceuticals, man-machine interfaces and in ambient intelligence systems in buildings or in transport.

Making this development was no easy task. The electrical characteristics of ‘ordinary transistors’ are highly predictable, while those of plastic transistors vary greatly. “All plastic transistors behave differently in the low-cost production processes at low temperatures,” explains Cantatore. “That makes it much more difficult to use them in devices. You need complex mathematical models to be able to predict their behavior accurately.”

The printed ADC circuit offers a resolution of four bits, and has a speed of two hertz. The circuits printed by CEA-Liten include more than 100 n- and p-type transistors and a resistance level on transparent plastic substrates. The carrier mobility of the printed transistors are above the amorphous silicon widely used in the display industry.