A massive greening in the Arctic

Scientists reveal new models projecting that wooded areas in the Arctic could increase by as much as 50 percent over the next few decades.

New research predicts that rising temperatures will lead to a massive “greening,” or increase in plant cover, in the Arctic. In a paper published on March 31 in Nature Climate Change, scientists reveal new models projecting that wooded areas in the Arctic could increase by as much as 50 percent over the next few decades. The researchers also show that this dramatic greening will accelerate climate warming at a rate greater than previously expected.

“Such widespread redistribution of Arctic vegetation would have impacts that reverberate through the global ecosystem,” said Richard Pearson, lead author on the paper and a research scientist at the American Museum of Natural History’s Center for Biodiversity and Conservation. 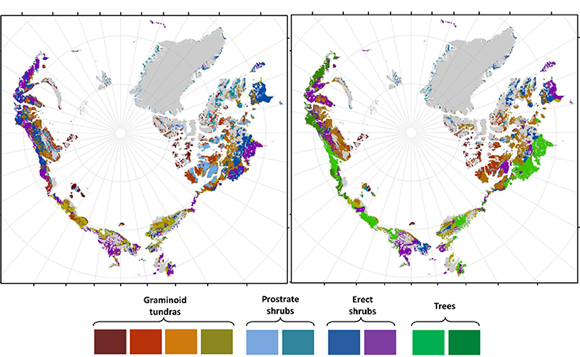 Arctic “greening”: Observed distribution (left) and predicted distribution of vegetation under a climate warming scenario for the 2050s (right). Data used to generate the observed image are from the Circumpolar Arctic Vegetation Map (2003).

Plant growth in arctic ecosystems has increased over the past few decades, a trend that is coincident with increases in temperatures, which are rising at about twice the global rate. The research team — from the Museum, AT&T Labs-Research, Woods Hole Research Center, Colgate University, Cornell University, and the University of York — used climate scenarios for the 2050s to explore how this trend is likely to continue in the future. The scientists developed models that statistically predict the types of plants that could grow under certain temperatures and precipitation. Although it comes with some uncertainty, this type of modeling is a robust way to study the Arctic because the harsh climate limits the range of plants that can grow (as opposed to a rainforest environment where many more types of plants could exist in the same temperature range).

The models reveal the potential for massive redistribution of vegetation across the Arctic under future climate, with about half of all vegetation switching to a different class and a massive increase in tree and shrub cover. What might this look like? In Siberia, for instance, trees could grow hundreds of miles north of the present tree line. “We are already getting a glimpse of this as taller shrubs are now rapidly taking over some of the warmer tundra areas,” said co-author Pieter Beck, a research associate at the Woods Hole Research Center. “Future impacts would extend far beyond the arctic region,” Pearson said. “For example, some species of birds seasonally migrate from lower latitudes and rely on finding particular polar habitats, such as open space for ground-nesting.” 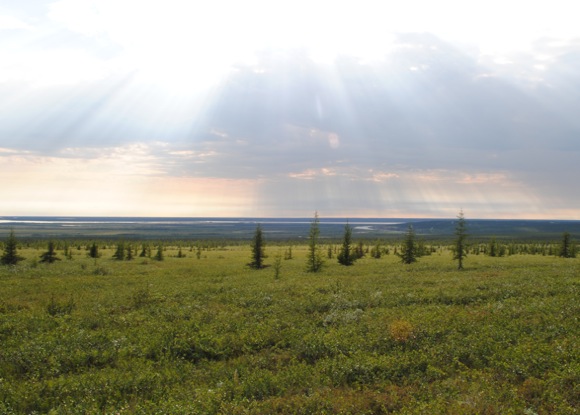 In addition, the researchers investigated the multiple climate change feedbacks that greening would produce. They found that a phenomenon called the albedo effect, based on the reflectivity of the Earth’s surface, would have the greatest impact on the Arctic’s climate. When the sun hits snow, most of the radiation is reflected back to space. But when it hits an area that’s “dark,” covered in trees or shrubs, more sunlight is absorbed in the area and the temperature increases. In the Arctic, this results in a positive feedback to climate warming: the more vegetation there is, the more warming will occur. “Increased plant growth will not offset this warming effect because plants in the Arctic absorb atmospheric carbon relatively slowly,” said co-author Michael Loranty, an assistant professor at Colgate University. 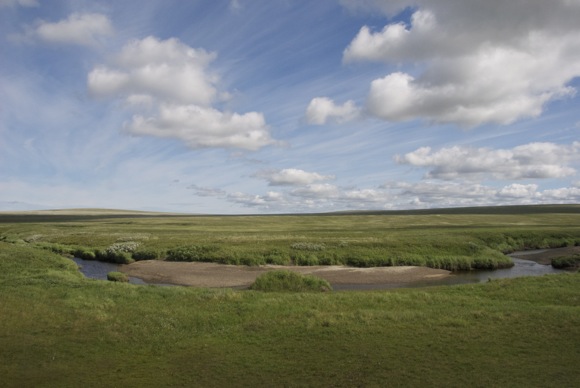 “By incorporating observed relationships between plants and albedo, we show that vegetation distribution shifts will result in an overall positive feedback to climate that is likely to cause greater warming than has previously been predicted,” said co-author and, Woods Hole Research Center Senior Scientist, Scott Goetz.

This work was funded by the National Science Foundation, grants IPY 0732948, IPY 0732954, and Expeditions 0832782. Other authors involved in this study include Steven Phillips (AT&T Labs-Research), Theodoros Damoulas (Cornell University), and Sarah Knight (American Museum of Natural History and University of York).