“This could make power generation from natural gas both cleaner and more efficient,” says Fanxing Li, co-author of a paper on the research and an assistant professor of chemical and biomolecular engineering at North Carolina State University.

At issue is a process called chemical looping, in which a solid, oxygen-laden material – called an “oxygen carrier” – is put in contact with natural gas. The oxygen atoms in the oxygen carrier interact with the natural gas, causing combustion that produces energy. 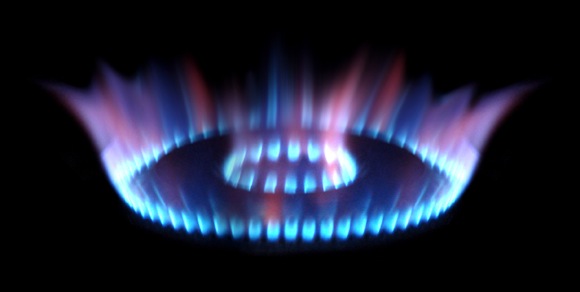 Previous state-of-the-art oxygen carriers were made from a composite of inert ceramic material and metal oxides. But Li’s team has developed a new type of oxygen carrier that include a “mixed ionic-electronic conductor,” which effectively shuttles oxygen atoms into the natural gas very efficiently – making the chemical looping combustion process as much as 70 times faster. This mixed conductor material is held in a nanoscale matrix with an iron oxide – otherwise known as rust. The rust serves as a source of oxygen for the mixed conductor to shuttle out into the natural gas.

In addition to energy, the combustion process produces water vapor and CO2. By condensing out the water vapor, researchers are able to create a stream of concentrated CO2 to be capture for sequestration.

Because the new oxygen carrier combusts natural gas so much more quickly than previous chemical looping technologies, it makes smaller chemical looping reactors more economically feasible – since they would allow users to create the same amount of energy with a smaller system.

“Improving this process hopefully moves us closer to commercial applications that use chemical looping, which would help us limit greenhouse gas emissions,” Li says.

The paper, “Iron Oxide with Facilitated O2 – Transport for Facile Fuel Oxidation and CO2 Capture in a Chemical Looping Scheme,” was chosen as part of the cover page story in the March issue of ACS Sustainable Chemistry & Engineering.