Device could open up new areas of research on materials and biological samples at tiny scales.

Researchers at MIT, working with partners at NASA, have developed a new concept for a microscope that would use neutrons — subatomic particles with no electrical charge — instead of beams of light or electrons to create high-resolution images. 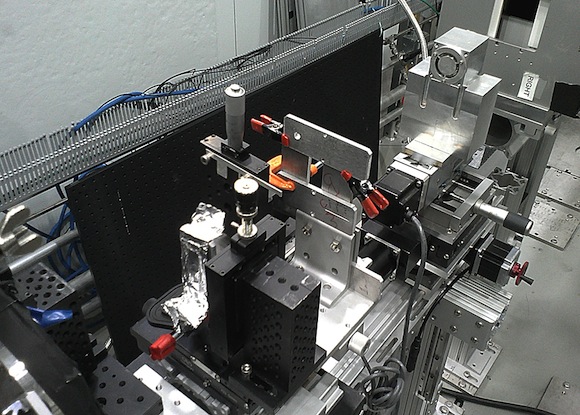 The team’s small prototype neutron microscope is shown set up for initial testing at MIT’s Nuclear Reactor Laboratory. The microscope mirrors are inside the small metal box at top right. Photo courtesy of researchers.

Among other features, neutron-based instruments have the ability to probe inside metal objects — such as fuel cells, batteries, and engines, even when in use — to learn details of their internal structure. Neutron instruments are also uniquely sensitive to magnetic properties and to lighter elements that are important in biological materials.

The new concept has been outlined in a series of research papers this year, including one published this week in Nature Communications by MIT postdoc Dazhi Liu, research scientist Boris Khaykovich, professor David Moncton, and four others.

Moncton, an adjunct professor of physics and director of MIT’s Nuclear Reactor Laboratory, says that Khaykovich first proposed the idea of adapting a 60-year-old concept for a way of focusing X-rays using mirrors to the challenge of building a high-performing neutron microscope. Until now, most neutron instruments have been akin to pinhole cameras: crude imaging systems that simply let light through a tiny opening. Without efficient optical components, such devices produce weak images with poor resolution.

“For neutrons, there have been no high-quality focusing devices,” Moncton says. “Essentially all of the neutron instruments developed over a half-century are effectively pinhole cameras.” But with this new advance, he says, “We are turning the field of neutron imaging from the era of pinhole cameras to an era of genuine optics.”

“The new mirror device acts like the image-forming lens of an optical microscope,” Liu adds.

Because neutrons interact only minimally with matter, it’s difficult to focus beams of them to create a telescope or microscope. But a basic concept was proposed, for X-rays, by Hans Wolter in 1952 and later developed, under the auspices of NASA, for telescopes such as the orbiting Chandra X-ray Observatory (which was designed and is managed by scientists at MIT). Neutron beams interact weakly, much like X-rays, and can be focused by a similar optical system.

It’s well known that light can be reflected by normally nonreflective surfaces, so long as it strikes that surface at a shallow angle; this is the basic physics of a desert mirage. Using the same principle, mirrors with certain coatings can reflect neutrons at shallow angles.

The actual instrument uses several reflective cylinders nested one inside the other, so as to increase the surface area available for reflection. The resulting device could improve the performance of existing neutron imaging systems by a factor of about 50, the researchers say — allowing for much sharper images, much smaller instruments, or both.

The team initially designed and optimized the concept digitally, then fabricated a small test instrument as a proof-of-principle and demonstrated its performance using a neutron beam facility at MIT’s Nuclear Reactor Laboratory. Later work, requiring a different spectrum of neutron energies, was carried out at Oak Ridge National Laboratory (ORNL) and at the National Institute of Standards and Technology (NIST).

Such a new instrument could be used to observe and characterize many kinds of materials and biological samples; other nonimaging methods that exploit the scattering of neutrons might benefit as well. Because the neutron beams are relatively low-energy, they are “a much more sensitive scattering probe,” Moncton says, for phenomena such as “how atoms or magnetic moments move in a material.”

The researchers next plan to build an optimized neutron-microscopy system in collaboration with NIST, which already has a major neutron-beam research facility. This new instrument is expected to cost a few million dollars.

Moncton points out that a recent major advance in the field was the construction of a $1.4 billion facility that provides a tenfold increase in neutron flux. “Given the cost of producing the neutron beams, it is essential to equip them with the most efficient optics possible,” he says.

Roger Pynn, a materials scientist at the University of California at Santa Barbara who was not involved in this research, says, “I expect it to lead to a number of breakthroughs in neutron imaging. … It offers the potential for some really new applications of neutron scattering — something that we haven’t seen for quite a while.”