Use of new analysis techniques provides food for thought about how people lived 5,000 years ago.

Archaeologists have made a discovery in southern subtropical China which could revolutionise thinking about how ancient humans lived in the region.

They have uncovered evidence for the first time that people living in Xincun 5,000 years ago may have practised agriculture –before the arrival of domesticated rice in the region.

Current archaeological thinking is that it was the advent of rice cultivation along the Lower Yangtze River that marked the beginning of agriculture in southern China. Poor organic preservation in the study region, as in many others, means that traditional archaeobotany techniques are not possible. 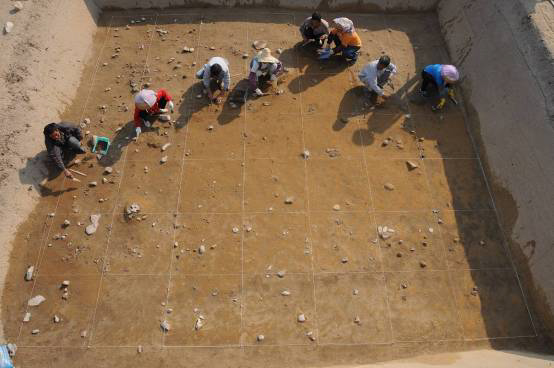 Now, thanks to a new method of analysis on ancient grinding stones, the archaeologists have uncovered evidence that agriculture could predate the advent of rice in the region.

The research was the result of a two-year collaboration between Dr Huw Barton, from the School of Archaeology and Ancient History at the University of Leicester, and Dr Xiaoyan Yang, Institute of Geographical Sciences and Natural Resources Research, Chinese Academy of Sciences, in Beijing.

Funded by a Royal Society UK-China NSFC International Joint Project, and other grants held by Yang in China, the research is published in PLOS ONE.

Dr Barton, Senior Lecturer in Bioarchaeology at the University of Leicester, described the find as ‘hitting the jackpot’: “Our discovery is totally unexpected and very exciting.

“We have used a relatively new method known as ancient starch analysis to analyse ancient human diet. This technique can tell us things about human diet in the past that no other method can.

“From a sample of grinding stones we extracted very small quantities of adhering sediment trapped in pits and cracks on the tool surface. From this material, preserved starch granules were extracted with our Chinese colleagues in the starch laboratory in Beijing. These samples were analysed in China and also here at Leicester in the Starch and Residue Laboratory, School of Archaeology and Ancient History. 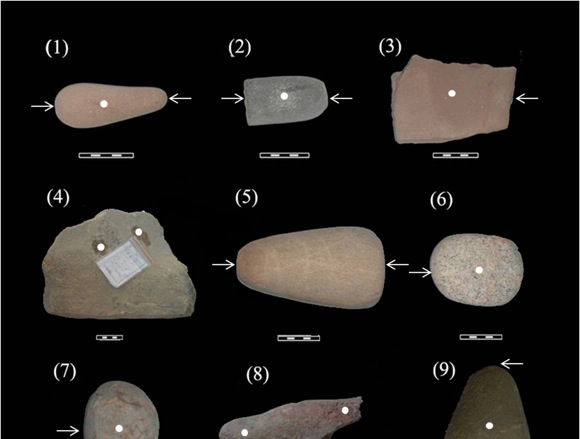 “Our research shows us that there was something much more interesting going on in the subtropical south of China 5,000 years ago than we had first thought. The survival of organic material is really dependent on the particular chemical properties of the soil, so you never know what you will get until you sample. At Xincun we really hit the jackpot. Starch was well-preserved and there was plenty of it. While some of the starch granules we found were species we might expect to find on grinding and pounding stones, ie. some seeds and tuberous plants such as freshwater chestnuts, lotus root and the fern root, the addition of starch from palms was totally unexpected and very exciting.”

Several types of tropical palms store prodigious quantities of starch. This starch can be literally bashed and washed out of the trunk pith, dried as flour, and of course eaten. It is non-toxic, not particularly tasty, but it is reliable and can be processed all year round. Many communities in the tropics today, particularly in Borneo and Indonesia, but also in eastern India, still rely on flour derived from palms. 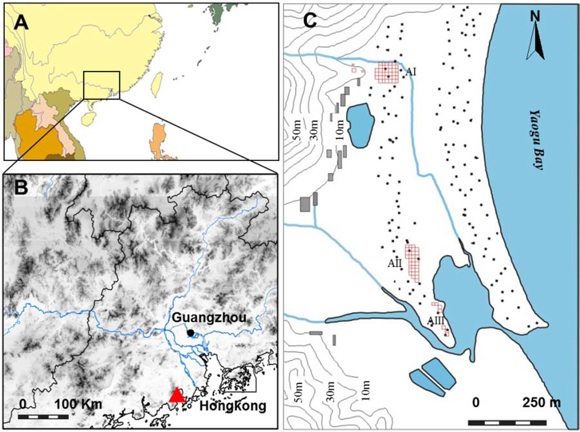 Map of the study region in southern China (A), Xincun site indicated by red triangle (B), and details of the Xincun site including excavation areas marked by red grids, stippling shows location of coastal sand dunes (C). Credit:Xiaoyan Yang

Dr Barton said: “The presence of at least two, possibly three species of starch producing palms, bananas, and various roots, raises the intriguing possibility that these plants may have been planted nearby the settlement.

“Today groups that rely on palms growing in the wild are highly mobile, moving from one palm stand to another as they exhaust the clump. Sedentary groups that utilise palms for their starch today, plant suckers nearby the village, thus maintaining continuous supply. If they were planted at Xincun, this implies that ‘agriculture’ did not arrive here with the arrival of domesticated rice, as archaeologists currently think, but that an indigenous system of plant cultivation may have been in place by the mid Holocene.

“The adoption of domesticated rice was slow and gradual in this region; it was not a rapid transformation as in other places. Our findings may indicate why this was the case. People may have been busy with other types of cultivation, ignoring rice, which may have been in the landscape, but as a minor plant for a long time before it too became a food staple.

“Future work will focus on grinding stones from nearby sites to see if this pattern is repeated along the coast.”