A novel device that uses only sunlight and wastewater to produce hydrogen gas could provide a sustainable energy source.

A research team led by Yat Li, associate professor of chemistry at the University of California, Santa Cruz, developed the solar-microbial device and reported their results in a paper published in the American Chemical Society journal ACS Nano. The hybrid device combines a microbial fuel cell (MFC) and a type of solar cell called a photoelectrochemical cell (PEC). In the MFC component, bacteria degrade organic matter in the wastewater, generating electricity in the process. The biologically generated electricity is delivered to the PEC component to assist the solar-powered splitting of water (electrolysis) that generates hydrogen and oxygen. 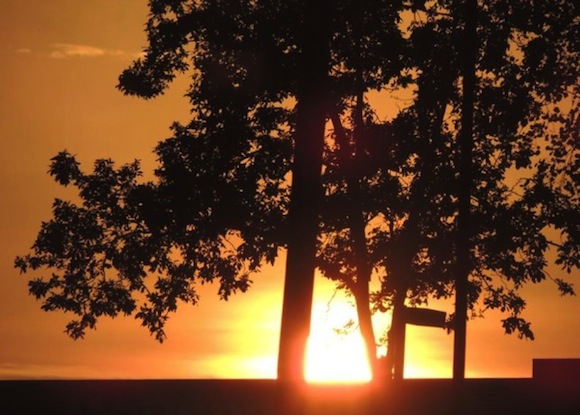 First sunrise of autumn by our friend Mary C. Cox in North Carolina.

Either a PEC or MFC device can be used alone to produce hydrogen gas. Both, however, require a small additional voltage (an “external bias”) to overcome the thermodynamic energy barrier for proton reduction into hydrogen gas. The need to incorporate an additional electric power element adds significantly to the cost and complication of these types of energy conversion devices, especially at large scales. In comparison, Li’s hybrid solar-microbial device is self-driven and self-sustained, because the combined energy from the organic matter (harvested by the MFC) and sunlight (captured by the PEC) is sufficient to drive electrolysis of water.

In effect, the MFC component can be regarded as a self-sustained “bio-battery” that provides extra voltage and energy to the PEC for hydrogen gas generation. “The only energy sources are wastewater and sunlight,” Li said. “The successful demonstration of such a self-biased, sustainable microbial device for hydrogen generation could provide a new solution that can simultaneously address the need for wastewater treatment and the increasing demand for clean energy.”

Microbial fuel cells rely on unusual bacteria, known as electrogenic bacteria, that are able to generate electricity by transferring metabolically-generated electrons across their cell membranes to an external electrode. Li’s group collaborated with researchers at Lawrence Livermore National Laboratory (LLNL) who have been studying electrogenic bacteria and working to enhance MFC performance. Initial “proof-of-concept” tests of the solar-microbial (PEC-MFC) device used a well-studied strain of electrogenic bacteria grown in the lab on artificial growth medium. Subsequent tests used untreated municipal wastewater from the Livermore Water Reclamation Plant. The wastewater contained both rich organic nutrients and a diverse mix of microbes that feed on those nutrients, including naturally occurring strains of electrogenic bacteria. 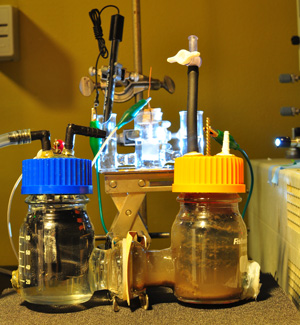 When fed with wastewater and illuminated in a solar simulator, the PEC-MFC device showed continuous production of hydrogen gas at an average rate of 0.05 m3/day, according to LLNL researcher and coauthor Fang Qian. At the same time, the turbid black wastewater became clearer. The soluble chemical oxygen demand–a measure of the amount of organic compounds in water, widely used as a water quality test–declined by 67 percent over 48 hours.

The researchers also noted that hydrogen generation declined over time as the bacteria used up the organic matter in the wastewater. Replenishment of the wastewater in each feeding cycle led to complete restoration of electric current generation and hydrogen gas production.

Qian said the researchers are optimistic about the commercial potential for their invention. Currently they are planning to scale up the small laboratory device to make a larger 40-liter prototype continuously fed with municipal wastewater. If results from the 40-liter prototype are promising, they will test the device on site at the wastewater treatment plant.

“The MFC will be integrated with the existing pipelines of the plant for continuous wastewater feeding, and the PEC will be set up outdoors to receive natural solar illumination,” Qian said.

“Fortunately, the Golden State is blessed with abundant sunlight that can be used for the field test,” Li added.