Researchers have designed a low-cost, long-life battery that could enable solar and wind energy to become major suppliers to the electrical grid.

“For solar and wind power to be used in a significant way, we need a battery made of economical materials that are easy to scale and still efficient,” said Yi Cui, a Stanford associate professor of materials science and engineering and a member of the Stanford Institute for Materials and Energy Sciences, a SLAC/Stanford joint institute. “We believe our new battery may be the best yet designed to regulate the natural fluctuations of these alternative energies.”

Cui and colleagues report their research results, some of the earliest supported by the DOE’s new Joint Center for Energy Storage Research battery hub, in the May issue of Energy & Environmental Science.

Currently the electrical grid cannot tolerate large and sudden power fluctuations caused by wide swings in sunlight and wind. As solar and wind’s combined contributions to an electrical grid approach 20 percent, energy storage systems must be available to smooth out the peaks and valleys of this “intermittent” power – storing excess energy and discharging when input drops.

Among the most promising batteries for intermittent grid storage today are “flow” batteries, because it’s relatively simple to scale their tanks, pumps and pipes to the sizes needed to handle large capacities of energy. The new flow battery developed by Cui’s group has a simplified, less expensive design that presents a potentially viable solution for large-scale production.

Today’s flow batteries pump two different liquids through an interaction chamber where dissolved molecules undergo chemical reactions that store or give up energy. The chamber contains a membrane that only allows ions not involved in reactions to pass between the liquids while keeping the active ions physically separated. This battery design has two major drawbacks: the high cost of liquids containing rare materials such as vanadium – especially in the huge quantities needed for grid storage – and the membrane, which is also very expensive and requires frequent maintenance.

These diagrams compare Stanford/SLAC’s new lithium-polysulfide flow battery design with conventional “redox” flow batteries. The new flow battery uses only one tank and pump and uses a simple coating instead of an expensive membrane to separate the anode and cathode. (Credit: Greg Stewart/SLAC)

The new Stanford/SLAC battery design uses only one stream of molecules and does not need a membrane at all. Its molecules mostly consist of the relatively inexpensive elements lithium and sulfur, which interact with a piece of lithium metal coated with a barrier that permits electrons to pass without degrading the metal. When discharging, the molecules, called lithium polysulfides, absorb lithium ions; when charging, they lose them back into the liquid. The entire molecular stream is dissolved in an organic solvent, which doesn’t have the corrosion issues of water-based flow batteries. 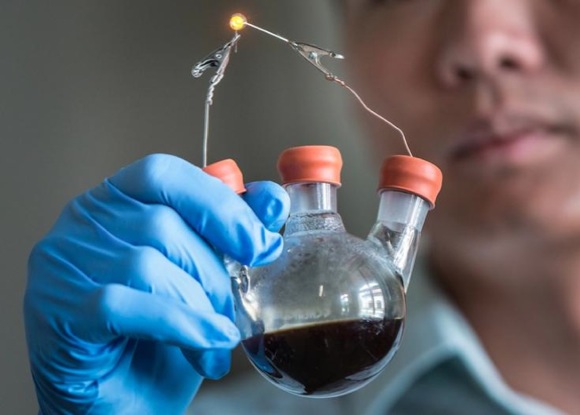 Professor Yi Cui holds a lab demonstration of his group’s new lithium-polysulfide flow battery contained in a simple flask. The design could serve as a model for a low-cost, long-life battery that enables solar and wind energy to become major suppliers to the electrical grid. Credit: Matt Beardsley/SLAC

To demonstrate their concept, the researchers created a miniature system using simple glassware. Adding a lithium polysulfide solution to the flask immediately produces electricity that lights an LED.

A utility version of the new battery would be scaled up to store many megawatt-hours of energy.

In the future, Cui’s group plans to make a laboratory-scale system to optimize its energy storage process and identify potential engineering issues, and to start discussions with potential hosts for a full-scale field-demonstration unit.