NASA’s new polar rover recently demonstrated in Greenland that it could operate completely autonomously in one of Earth’s harshest environments.

The robot known as GROVER, which stands for both Greenland Rover and Goddard Remotely Operated Vehicle for Exploration and Research, was designed by teams of students attending engineering boot camps at Goddard in the summers of 2010 and 2011. Built to carry a ground-penetrating radar to analyze layers of snow and ice, the rover was later transferred to Boise State University for fine-tuning with NASA funding.

Although researchers had tested GROVER at a beach in Maryland and in the snow in Idaho, the May 6 to June 8 testing at Summit Camp, the highest spot in Greenland, was the rover’s first polar experience. One of the main goals was proving that the robot could execute commands sent from afar over an Iridium satellite connection – an objective GROVER accomplished. 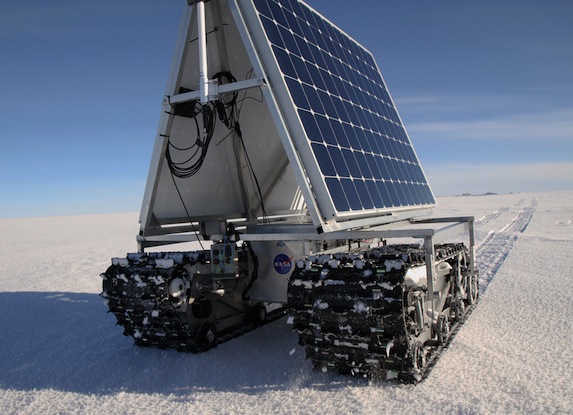 “When we saw it moving and travelling to the locations our professor had keyed in from Boise, we knew all of our hard work had paid off,” said Gabriel Trisca, a graduate student from Boise State University who has been involved in the GROVER project from its start. “GROVER has grown to be a fully-autonomous, GPS-guided and satellite-linked platform for scientific research.” Trisca accompanied the robot to Greenland.

GROVER collected and stored radar data over 18 miles during the five weeks it spent on the ice. During the testing, the rover was also able to transmit information in real time on how its onboard systems were performing. The robot’s solar-charged batteries allowed it to operate for up to 12 hours before having to recharge.

“When you work at the poles, on the ice, it’s cold, it’s tiring, it’s expensive and there’s a limit to how much ground you can cover on snowmobiles,” said Lora Koenig, a glaciologist at NASA’s Goddard Space Flight Center in Greenbelt, Md. “It would be great if autonomous robotic platforms could do part of this work — especially the part where high winds and blowing snow try to freeze your skin.”

Though researchers had initially expected the 800-pound robot to work around the clock and cover more ground, the extreme polar conditions took a toll on GROVER’s electronics, battery consumption and mobility.

“This is very common the first time you take an instrument into an environment like Greenland,” said Hans-Peter Marshall, a geoscientist at Boise State University and science adviser on the project. “It’s always more challenging than you thought it was going to be: Batteries don’t recharge as fast and they don’t last as long, and it takes computers and instrumentation longer to boot.”

Another challenge was the uneven icy terrain. The researchers had to repeatedly tinker with the rover’s speed and the power sent to each of its two autonomous tracks so that the robot would not get stuck in the snow.

GROVER’s radar emits a signal that bounces off the different layers of the ice sheet, allowing scientists to study how snow and ice accumulates in Greenland. The team wanted to check whether the robot could see a layer in the ice sheet that formed after an extreme melt event in the summer of 2012. Marshall said a first analysis of GROVER’s radar data revealed it was sufficient to detect the melt layer and potentially estimate its thickness.

Though currently the radar information is stored onboard and retrieved afterward, the GROVER team wants to switch to a geostationary satellite connection that will let the robot transmit large volumes of data in real time. Other possible changes include replacing components that are hard to manipulate in the cold (like switches and wires), merging the two onboard computers to reduce energy consumption, and using wind generators to create more power or adding a sled carrying additional solar panels. 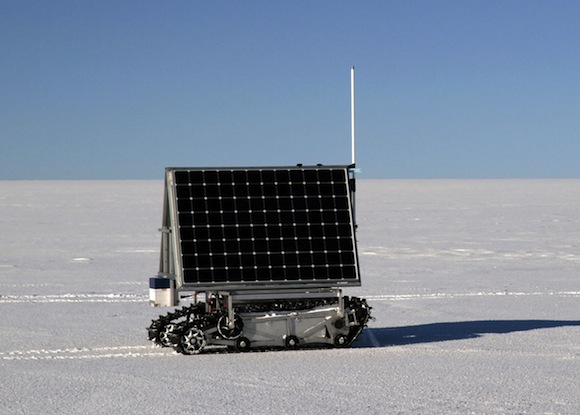 For the power test on June 2, researchers sent GROVER a list of coordinates forming a large circle outside of Summit Camp. GROVER went around the loop three times and tracked all of the waypoints. Image Credit: NASA Goddard/Matt Radcliff

GROVER’s test in Greenland coincided with the field-testing of a smaller, non-autonomous and faster robot called CoolRobot, built by Dartmouth College. Marshall said that in the future, he would like to see the different science teams that are currently developing polar rovers work together to create a pool of robotic platforms, which glaciologists could borrow from for their studies.

“One thing I can imagine is having a big robot like GROVER with several smaller ones that can move radially outwards to increase the swath GROVER would cover,” Marshall said. “Also, we’ve been thinking about bringing back smaller platforms to a larger one to recharge.”

“An army of polar robots – that would be neat,” Koenig said.