“The successful testing and integration of LLCD to LADEE is a major accomplishment,” said Donald Cornwell, LLCD mission manager at NASA’s Goddard Space Flight Center in Greenbelt, Md. “It demonstrates that this new technology is robust and ready for space. This is the first time NASA has had such a communication system pass all its tests and be certified flight ready.”

The LLCD mission will use a highly reliable infrared laser, similar to those used to bring high-speed data over fiber optic cables into our workplaces and homes. Data, sent in the form of hundreds of millions of short pulses of light every second, will be sent by the LADEE spacecraft to any one of three ground telescopes in New Mexico, California and Spain. 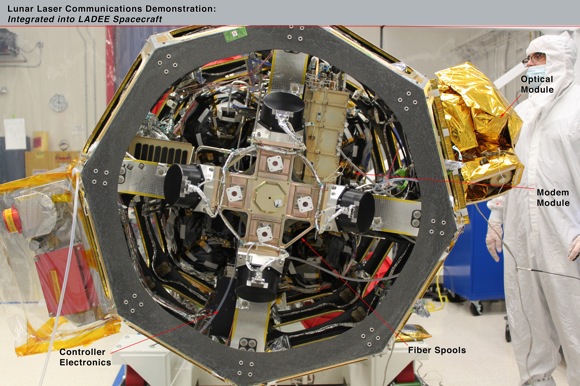 The real challenge of LLCD will be to point its very narrow laser beam accurately to ground stations across a distance of approximately 238,900 miles while moving. Failure to do so would cause a dropped signal or loss of communication.

“This pointing challenge is the equivalent of a golfer hitting a ‘hole-in-one’ from a distance of almost five miles,” said Cornwell. “Developers at the Massachusetts Institute of Technology’s (MIT) Lincoln Laboratory have designed a sophisticated system to cancel out the slightest spacecraft vibrations. This is in addition to dealing with other challenges of pointing and tracking the system from such a distance. We are excited about these advancements.”

The LLCD mission will also serve as a pathfinder for the 2017 launch of NASA’s Laser Communication Relay Demonstration (LCRD). That mission will demonstrate the long-term viability of laser communication from a geostationary relay satellite to Earth. In a geostationary orbit the spacecraft orbits at the same speed as Earth, which allows it to maintain the same position in the sky.

Engineers believe that future space missions will be able to use laser communication technology with its low mass and power requirements, to provide increased data quantity for real-time communication and 3-D high-definition video. For example, using S-band communications aboard the LADEE spacecraft would take 639 hours to download an average-length HD movie. Using LLCD technology that time would be reduced to less than eight minutes.

Prior to shipment from MIT, the LLCD spaceflight hardware was subjected to a rigorous set of flight test simulations such as the strong vibrations expected from a Minotaur V rocket, the launch vehicle for the LADEE mission. The LLCD hardware also had to withstand simulated extreme temperatures and other conditions it will experience within the harsh environment of space. Throughout this stringent battery of tests, LLCD maintained its critical alignment and stable pointing accuracy.

“This is an exciting time for space communications,” said Cornwell. “We are about to make a leap in communications ability that is unmatched in NASA’s history.”