To be launched in 2020, Euclid’s 1.2 m-diameter telescope and two scientific instruments will map the shape, brightness and 3D distribution of two billion galaxies covering more than a third of the whole sky and looking back over three-quarters of the history of the Universe.

Scientists hope to solve key problems in our understanding of the evolution and fate of our expanding cosmos: the roles played by ‘dark matter’ and ‘dark energy’.

Dark matter is invisible, but has gravity and acts to slow the expansion. Dark energy, however, seems to be accelerating the expansion seen around us today.

Together, these two components are thought to comprise more than 95% of the mass and energy of the Universe, with ‘normal’ matter and energy making up the remaining small fraction. But what they are remains a profound mystery.

NASA recently signed a Memorandum of Understanding with ESA outlining its contribution to the mission. The US agency will provide 20 detectors for the near-infrared instrument, which will operate alongside a visible-wavelength camera. The instruments, telescope and spacecraft will be built and operated in Europe. 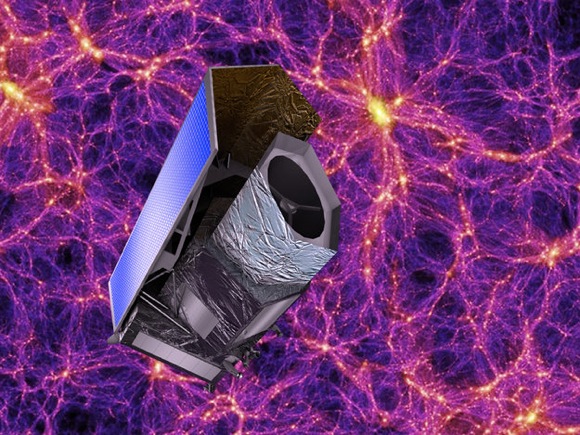 NASA has also nominated 40 US scientists to become members of the Euclid Consortium, who will build the instruments and analyse the science data returned from the mission. The consortium already includes almost 1000 scientists from 13 European countries and the US.

“ESA’s Euclid mission is designed to probe one of the most fundamental questions in modern cosmology, and we welcome NASA’s contribution to this important endeavour, the most recent in a long history of cooperation in space science between our two agencies,” said Alvaro Giménez Cañete, ESA’s Director of Science and Robotic Exploration.

Euclid is optimised to answer one of the most important questions in modern cosmology: why is the Universe expanding at an accelerating rate, rather than slowing down due to the gravitational attraction of all the matter in it?

The discovery of this cosmic acceleration in 1998 by teams of US, European and other international scientists was rewarded with the Nobel Prize for Physics in 2011, and yet we still do not know what causes it.

The term ‘dark energy’ is often used to signify the mysterious force driving the acceleration. By using Euclid to study its effects on galaxies and galaxy clusters across the Universe, astronomers hope to come much closer to understanding its true nature and influence.

“The official signing of the Memorandum is a positive step for the Euclid mission and we’re looking forward to welcoming our US colleagues onto the team,” said René Laureijs, ESA’s Euclid project scientist.