The moon, designated S/2004 N 1, is estimated to be no more than 12 miles across, making it the smallest known moon in the Neptunian system. It is so small and dim that it is roughly 100 million times fainter than the faintest star that can be seen with the naked eye. It even escaped detection by NASA’s Voyager 2 spacecraft, which flew past Neptune in 1989 and surveyed the planet’s system of moons and rings. 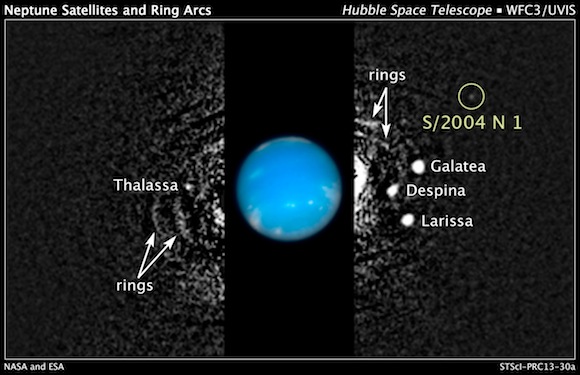 Mark Showalter of the SETI Institute in Mountain View, Calif., found the moon July 1, while studying the faint arcs, or segments of rings, around Neptune. “The moons and arcs orbit very quickly, so we had to devise a way to follow their motion in order to bring out the details of the system,” he said. “It’s the same reason a sports photographer tracks a running athlete — the athlete stays in focus, but the background blurs.” 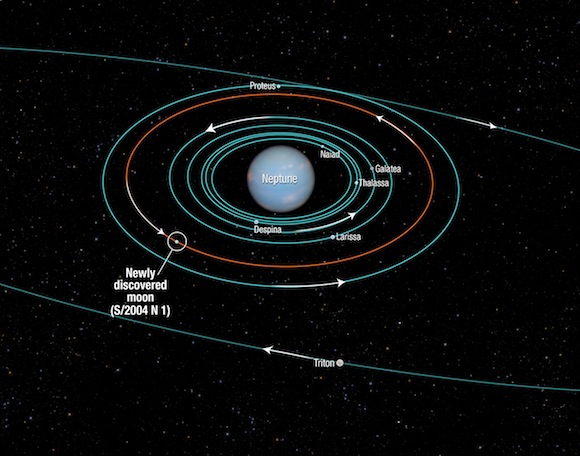 This diagram shows the orbits of several moons located close to the planet Neptune. Image credit: NASA, ESA, and A. Feild (STScI)

The method involved tracking the movement of a white dot that appears over and over again in more than 150 archival Neptune photographs taken by Hubble from 2004 to 2009.
On a whim, Showalter looked far beyond the ring segments and noticed the white dot about 65,400 miles from Neptune, located between the orbits of the Neptunian moons Larissa and Proteus. The dot is S/2004 N 1. Showalter plotted a circular orbit for the moon, which completes one revolution around Neptune every 23 hours.