Researchers analyzing meteorite fragments that fell on a frozen lake in Canada have developed an explanation for the origin of life’s handedness – why living things only use molecules with specific orientations. The work also gave the strongest evidence to date that liquid water inside an asteroid leads to a strong preference of left-handed over right-handed forms of some common protein amino acids in meteorites. The result makes the search for extraterrestrial life more challenging.

“Our analysis of the amino acids in meteorite fragments from Tagish Lake gave us one possible explanation for why all known life uses only left-handed versions of amino acids to build proteins,” said Dr. Daniel Glavin of NASA’s Goddard Space Flight Center in Greenbelt, Md. Glavin is lead author of a paper on this research to be published in the journal Meteoritics and Planetary Science. 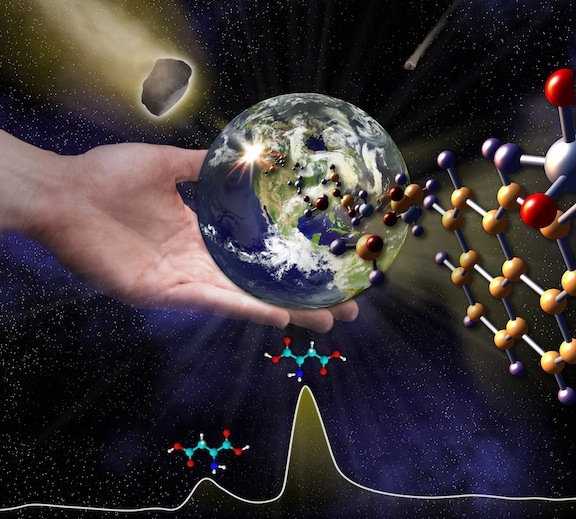 In January, 2000, a large meteoroid exploded in the atmosphere over northern British Columbia, Canada, and rained fragments across the frozen surface of Tagish Lake. Because many people witnessed the fireball, pieces were collected within days and kept preserved in their frozen state. This ensured that there was very little contamination from terrestrial life. “The Tagish Lake meteorite continues to reveal more secrets about the early Solar System the more we investigate it,” said Dr. Christopher Herd of the University of Alberta, Edmonton, Canada, a co-author on the paper who provided samples of the Tagish Lake meteorite for the team to analyze. “This latest study gives us a glimpse into the role that water percolating through asteroids must have played in making the left-handed amino acids that are so characteristic of all life on Earth.”

Proteins are the workhorse molecules of life, used in everything from structures like hair to enzymes, the catalysts that speed up or regulate chemical reactions. Just as the 26 letters of the alphabet are arranged in limitless combinations to make words, life uses 20 different amino acids in a huge variety of arrangements to build millions of different proteins. Amino acid molecules can be built in two ways that are mirror images of each other, like your hands. Although life based on right-handed amino acids would presumably work fine, they can’t be mixed. “Synthetic proteins created using a mix of left- and right-handed amino acids just don’t work,” says Dr. Jason Dworkin of NASA Goddard, co-author of the study and head of the Goddard Astrobiology Analytical Laboratory, where the analysis was performed.

The team ground up samples of the Tagish Lake meteorites, mixed them into a hot-water solution, then separated and identified the molecules in them using a liquid chromatograph mass spectrometer. “We discovered that the samples had about four times as many left-handed versions of aspartic acid as the opposite hand,” says Glavin. Aspartic acid is an amino acid used in every enzyme in the human body. It is also used to make the sugar substitute Aspartame. “Interestingly, the same meteorite sample showed only a slight left-hand excess (no more than eight percent) for alanine, another amino acid used by life.”

“At first, this made no sense, because if these amino acids came from contamination by terrestrial life, both amino acids should have large left-handed excesses, because both are common in biology,” says Glavin. “However, a large left-hand excess in one and not the other tells us that they were not created by life but instead were made inside the Tagish Lake asteroid.” The team confirmed that the amino acids were probably created in space using isotope analysis.

Isotopes are versions of an element with different masses; for example, carbon 13 is a heavier, and less common, variety of carbon. Since the chemistry of life prefers lighter isotopes, amino acids enriched in the heavier carbon 13 were likely created in space.

“We found that the aspartic acid and alanine in our Tagish Lake samples were highly enriched in carbon 13, indicating they were probably created by non-biological processes in the parent asteroid,” said Dr. Jamie Elsila of NASA Goddard, a co-author on the paper who performed the isotopic analysis. This is the first time that carbon isotope measurements have been reported for these amino acids in Tagish Lake. The carbon 13 enrichment, combined with the large left-hand excess in aspartic acid but not in alanine, provides very strong evidence that some left-handed proteinogenic amino acids — ones used by life to make proteins — can be produced in excess in asteroids, according to the team.

Some have argued that left-handed amino acid excesses in meteorites were formed by exposure to polarized radiation in the solar nebula – the cloud of gas and dust from which asteroids, and eventually the Solar System, were formed. However, in this case, the left-hand aspartic acid excesses are so large that they cannot be explained by polarized radiation alone. The team believes that another process is required.

“One thing that jumped out at me was that alanine and aspartic acid can crystallize differently when you have mixtures of both left-handed and right-handed molecules,” said Dr. Aaron Burton, a NASA Postdoctoral Program Fellow at NASA Goddard and a co-author on the study. “This led us to find several studies where researchers have exploited the crystallization behavior of molecules like aspartic acid to get left-handed or right-handed excesses. Because alanine forms different kinds of crystals, these same processes would produce equal amounts of left- and right-handed alanine. We need to do some more experiments, but this explanation has the potential to explain what we see in the Tagish Lake meteorite and other meteorites.”

The team believes a small initial left-hand excess could get amplified by crystallization and dissolution from a saturated solution with liquid water. Some amino acids, like aspartic acid, have a shape that lets them fit together in a pure crystal – one comprised of just left-handed or right-handed molecules. For these amino acids, a small initial left- or right-hand excess could become greatly amplified at the expense of the opposite-handed crystals, similar to the way a large snowball gathers more snow and gets bigger more rapidly when rolled downhill than a small one. Other amino acids, like alanine, have a shape that prefers to join together with their mirror image to make a crystal, so these crystals are comprised of equal numbers of left- and right-handed molecules. As these “hybrid” crystals grow, any small initial excess would tend to be washed out for these amino acids. A requirement for both of these processes is a way to convert left-handed to right-handed molecules, and vice-versa, while they are dissolved in the solution.

This process only amplifies a small excess that already exists. Perhaps a tiny initial left-hand excess was created by conditions in the solar nebula. For example, polarized ultraviolet light or other types of radiation from nearby stars might favor the creation of left-handed amino acids or the destruction of right-handed ones, according to the team. This initial left-hand excess could then get amplified in asteroids by processes like crystallization. Impacts from asteroids and meteorites could deliver this material to Earth, and left-handed amino acids might have been incorporated into emerging life due to their greater abundance, according to the team. Also, similar enrichments of left-handed amino acids by crystallization could have occurred on Earth in ancient sediments that had water flowing through them, such as the bottoms of rivers, lakes, or seas, according to the team.

The result complicates the search for extraterrestrial life – like microbial life hypothesized to dwell beneath the surface of Mars, for example. “Since it appears a non-biological process can create a left-hand excess in some kinds of amino acids, we can’t use such an excess alone as proof of biological activity,” says Glavin.

Republished with permission from NASA.