Moon was created in giant smashup

Planetary scientist says his group has discovered evidence that the moon was born in a flaming blaze of glory when a body the size of Mars collided with the early Earth.

It’s a big claim, but Washington University in St. Louis planetary scientist Frédéric Moynier says his group has discovered evidence that the moon was born in a flaming blaze of glory when a body the size of Mars collided with the early Earth.

The evidence might not seem all that impressive to a nonscientist: a tiny excess of a heavier variant of the element zinc in moon rocks. But the enrichment probably arose because heavier zinc atoms condensed out of the roiling cloud of vaporized rock created by a catastrophic collision faster than lighter zinc atoms, and the remaining vapor escaped before it could condense.

Scientists have been looking for this kind of sorting by mass, called isotopic fractionation, since the Apollo missions first brought moon rocks to Earth in the 1970s. Moynier, PhD, assistant professor of earth and planetary sciences in Arts & Sciences — together with PhD student, Randal Paniello, and colleague James Day of the Scripps Institution of Oceanography — are the first to find it.

The moon rocks, geochemists discovered, while otherwise chemically similar to Earth rocks, were woefully short on volatiles (easily evaporated elements). A giant impact explained this depletion, whereas alternative theories for the moon’s origin did not.

But a creation event that allowed volatiles to slip away should also have produced isotopic fractionation. Scientists looked for fractionation but were unable to find it, leaving the impact theory of origin in limbo — neither proved nor disproved — for more than 30 years.

“The magnitude of the fractionation we measured in lunar rocks is 10 times larger than what we see in terrestrial and Martian rocks,” Moynier says, “so it’s an important difference.”

The data, published in the Oct. 18, 2012, issue of Nature, provide the first physical evidence for wholesale vaporization event since the discovery of volatile depletion in moon rocks, Moynier says.

According to the Giant Impact Theory, proposed in its modern form at a conference in 1975, Earth’s moon was created in an apocalyptic collision between a planetary body called Theia (in Greek mythology the mother of the moon Selene) and the early Earth. 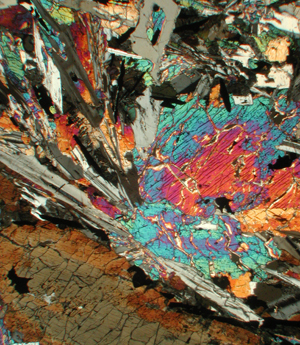 The smashup released so much energy it melted and vaporized Theia and much of the proto-Earth’s mantle. The moon then condensed out of the cloud of rock vapor, some of which also re-accreted to the Earth.

This seemingly outlandish idea gained traction because computer simulations showed a giant collision could have created an Earth-moon system with the right orbital dynamics and because it explained a key characteristic of the moon rocks.

Once geochemists got moon rocks into the lab, they quickly realized that the rocks are depleted in what geochemists call “moderately volatile” elements. They are very poor in sodium, potassium, zinc and lead, Moynier says.

“But if the rocks were depleted in volatiles because they had been vaporized during a giant impact, we should also have seen isotopic fractionation,” he says. (Isotopes are variants of an element that have slightly different masses.)

The trouble was that scientists who looked for isotopic fractionation couldn’t find it.

Asked how he felt when he saw the first results, Moynier says, “When you find something that is new and that has important ramifications, you want to be sure you haven’t gotten anything wrong.

“I half expected results like those previously obtained for moderately volatile elements, so when we got something so different, we reproduced everything from scratch to make sure there were no mistakes because some of the procedures in the lab could conceivably fractionate the isotopes.”

He also worried that fractionation could have occurred through localized processes on the moon, such as fire fountaining.

To make sure the effect was global, the team analyzed 20 samples of lunar rocks, including ones from the Apollo 11, 12, 15 and 17 missions — all of which went to different locations on the moon — and one lunar meteorite.

To obtain the samples, which are stored at the Johnson Space Center in Houston, Moynier had to convince a committee that controls access to them of the project’s scientific merit.

“What we wanted were the basalts,” Moynier says, “because they’re the ones that came from inside the moon and would be more representative of the moon’s composition.”

But lunar basalts have different chemical compositions, Moynier says, including a wide range of titanium concentrations. Isotopes also can be fractionating during the solidification of minerals from a melt. “The effect should be very, very tiny,” he says, “but to make sure this wasn’t what we were seeing, we analyzed both titanium-rich and titanium-poor basalts, which are at the two extremes of the range of chemical composition on the moon.”

The low- and high-titanium basalts had the same zinc isotopic ratios.

For comparison, they also analyzed 10 Martian meteorites. A few had been found in Antarctica but the others were from the collections at the Field Museum, the Smithsonian Institution and the Vatican.

Mars, like the Earth, is very rich in volatile elements, Moynier says. “Because there is a decent amount of zinc inside the rocks, we only needed a tiny bit to test for fractionation, and so these samples were easier to get.” 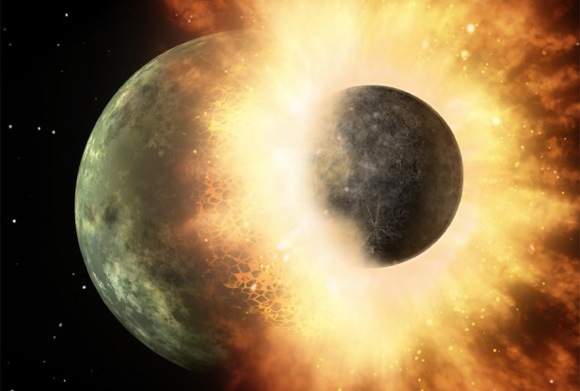 Compared to terrestrial or Martian rocks, the lunar rocks Moynier and his team analyzed have much lower concentrations of zinc but are enriched in the heavy isotopes of zinc.

Earth and Mars have isotopic compositions like those of chondritic meteorites, which are thought to represent the original composition of the cloud of gas and dust from which the solar system formed.

The simplest explanation for these differences is that conditions during or after the formation of the moon led to more extensive volatile loss and isotopic fractionation than was experienced by Earth or Mars.

The isotopic homogeneity of the lunar materials, in turn, suggests that isotopic fractionation resulted from a large-scale process rather than one that operated only locally.

Given these lines of evidence, the most likely large-scale event is wholesale melting during the formation of the moon. The zinc isotopic data therefore supports the theory that a giant impact gave rise to the Earth-moon system.

Without the stabilizing influence of the moon, the Earth would probably be a very different sort of place. Planetary scientists think the Earth would spin more rapidly, days would be shorter, weather more violent, and climate more chaotic and extreme. In fact, it might have been such a harsh world, that it would have been unfit for the evolution of our favorite species: us.

Via Washington University in St. Louis