Monster black hole spins at half the speed of light

Light speed is about 300,000 kilometers per second (186,000 miles per second), so this black hole is spinning almost unbelievably fast. 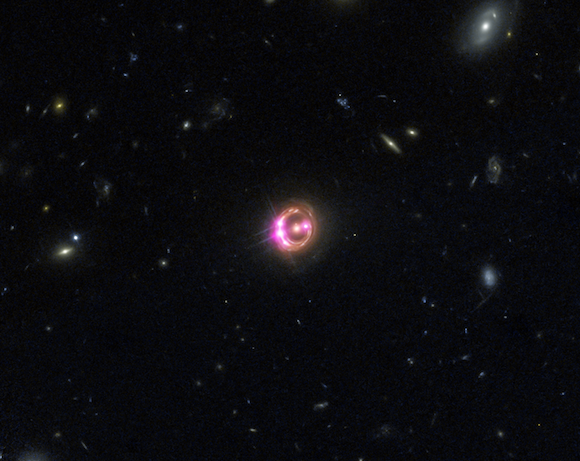 View larger. | Multiple images of a distant quasar are visible in this combined view from NASA’s Chandra X-ray Observatory and the Hubble Space Telescope. The Chandra data were used to directly measure the spin of the supermassive black hole powering this quasar. Credit: X-ray: NASA/CXC/Univ of Michigan/R.C.Reis et al; Optical: NASA/STScI

University of Michigan scientists have made the first direct measurement of the rate of spin of a supermassive black hole, 6 billion light-years away. They found it is spinning at half the speed of light. Light speed is about 300,000 kilometers (186,000 miles) per second! Who knew? Maybe they all spin that fast. The Michigan astronomers published their findings online in the journal Nature on March 5, 2014.

These scientists say the work provides insights into how these distant black holes and their host galaxies grow and change over time.

Supermassive black holes are believed to lurk at the cores of most, if not all, galaxies. They are millions or billions of times more massive than our sun, and they play an important role in how galaxies evolve.

“The growth history of a supermassive black hole is encoded in its spin, so studies of spin versus time can allow us study the co-evolution of black holes and their host galaxies,” said Mark Reynolds, an assistant research scientist in astronomy in the University of Michigan College of Literature, Arts and Sciences. Reynolds is a co-author of the new study.

Spin refers both to the speed and direction that a black hole is rotating in relation to the gases falling into it. While astronomers have long been able to measure black hole masses, determining their spins has been much more difficult. (Spin and mass are the two characteristics they use to define black holes.)

Over the past decade, scientists have found ways to estimate spin from several billion light-years away, but their methods were indirect and relied on assumptions.

“We want to be able to cut out the middle man, so to speak, in determining the spins of black holes across the universe,” said Rubens Reis, a postdoctoral research fellow in astronomy at U-M and first author of the new paper.

They were able to do that for the black hole at the center of the quasar known as RX J1131-1231 (RX J1131 for short.) It’s about six billion light-years from Earth and 7.7 billion years old. Quasars, among the most luminous and energetic objects in the universe, are made of matter falling into supermassive black holes. They give off energy and light at various wavelengths including visible and X-ray.

Under normal circumstances, this faraway quasar would be too faint to study. But the researchers were able to take advantage of a sort of natural telescope effect known as gravitational lensing and a lucky alignment of the quasar and a giant elliptical galaxy to get a closer view. Gravitational lensing, first predicted by Einstein, occurs when the gravity of massive objects acts as a lens to bend, distort and magnify the light from more distant objects as it passes.

“Because of this gravitational lens, we were able to get very detailed information on the X-ray spectrum — that is, the amount of X-rays seen at different energies — from RX J1131,” Reynolds said. “This allowed us to get a very accurate value for how fast the black hole is spinning.”

The researchers amplified their natural telescope signal with NASA’s Chandra X-ray Observatory and the European Space Agency’s XMM-Newton telescope to determine that the black hole is spinning at nearly half the speed of light. The X-ray data let the scientist measure the radius of the disk of the matter falling into the black hole, and from its radius, they could determine its spin speed.

“We estimate that the X-rays are coming from a region in the disk located only about three times the radius of the event horizon — the point of no return for infalling matter,” said Jon M. Miller, an associate professor of astronomy at U-M, and another co-author on the paper. “The black hole must be spinning extremely rapidly to allow a disk to survive at such a small radius.”

Measuring the spin of distant black holes can help researchers figure out whether they grow through large mergers or smaller episodes. If they grow mainly from galaxy mergers, they should feed on a steady supply of new material from one direction in their surrounding disks, a NASA news release states. That would lead to rapid spinning.

If they grow through many small episodes, such as interstellar gas clouds and stars wandering too closely and falling in, they would be expected to accumulate material from random directions. Like a merry-go-round that’s pushed both backwards and forwards, this would make the black hole spin more slowly, the researchers said.

The discovery that the black hole in RX J1131 is spinning at nearly half the speed of light suggests that it has grown via mergers.

“The ability to measure black hole spin over a large range of cosmic time should make it possible to directly study whether or not the black hole evolves in step with its host galaxy,” Reis said. “The measurement of the spin of the RX J1131-1231 black hole is a major step along that path, and demonstrates a technique for assembling a sample of distant supermassive black holes with current X-ray observatories.”

Via The University of Michigan