Monogamy evolved as a mating strategy

New research indicates that social monogamy evolved as a result of competition for females.

Social monogamy, where one breeding female and one breeding male are closely associated with each other over several breeding seasons, appears to have evolved as a mating strategy, new research reveals. It was previously suspected that social monogamy resulted from a need for extra parental care by the father. 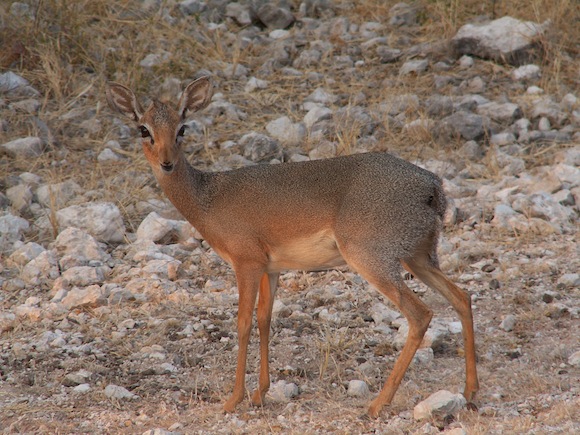 The comparative study, by University of Cambridge researchers Dieter Lukas and Tim Clutton-Brock, shows that the ancestral system for all mammalian groups is of females living in separate ranges with males defending overlapping territories, and that monogamy evolved where males were unable to monopolise and defend multiple females. The research is published in the journal Science.

For the study, the researchers classified all 2500 mammalian species for which information exists as either solitary, socially monogamous or group-living (several breeding females share a common range and either eat or sleep together). They showed that nine per cent of mammals are socially monogamous, including a few rodents, a number of primates, and some carnivores, like jackals, wolves, and meerkats.

Previously, it had been suggested that monogamy evolved as a result of selection for paternal support in raising offspring (for example, if the female alone could not provide enough food or adequately defend the young). This study shows that paternal care usually evolved after monogamy was already present.

This advance in understanding was, says Lukas, due to the volume of information they collected and the availability of genetic information that allowed the researchers to determine the sequence in which different traits evolved.

“Up until now, there have been different ideas about how social monogamy in mammals evolved,” says Lukas, from Cambridge’s Department of Zoology. “With this study we were able to test all these different hypotheses at once. Paternal care evolves after monogamy is present, and seems to be a consequence rather than a cause of the evolution of monogamy. It appears to occur in about half of all socially monogamous species, and once it does evolve, it provides a clear benefit to the female.”

They found convincing support for the hypothesis that monogamy arose as a mating strategy where males could not defend access to more than one female. Monogamy is associated with low density of females, low levels of home-range overlap, and indirectly, with their diets. The study showed that monogamy evolves in species that rely on high quality but patchily distributed food sources, such as meat and fruit. In contrast, in herbivores, which rely on more abundant resources, social monogamy is rare.

“Where females are widely dispersed,” says Clutton-Brock, “the best strategy for a male is to stick with one female, defend her, and make sure that he sires all her offspring. In short, a male’s best strategy is to be monogamous.”

The analysis did not include humans, and the researchers are sceptical that these results tell us much about the evolution of human breeding systems.

Clutton-Brock added: “It is debatable whether humans should be classified as monogamous. Because all the African apes are polygamous and group living, it is likely that the common ancestor of hominids was also polygamous. One possibility is that the shift to monogamy in humans may be the result in the change of dietary patterns that reduce female density. While another is that slow development of juveniles required extended care by both sexes. However, reliance by humans on cultural adaptations means that it is difficult to extrapolate from ecological relationships in other animals.”