Molecules generated that can halt metastasis of colon cancer

Researches have managed to halt the progress of colon cancer and its metastasis in the liver in an experimental model with mice.

A Basque research consortium has managed to halt the progress of colon cancer and its metastasis in the liver in an experimental model with mice. This advance, that may open a new path for the future treatment of such pathologies, has been achieved by creating molecules which interfere with the adhesion of tumour cells to other cells of the organism. In this way, the molecules halt both the growth of the tumour and the dissemination of the tumour to and its proliferation in other organs.

The research, published in the prestigious North American Journal of Medicinal Chemistry, is based on a previous work by researchers at the University of the Basque Country (UPV-EHU) which had described a series of molecules which reduced the metastasis of melanoma (a serious variety of skin cancer) in mice. That research opened up the possibility of generating new molecules with this activity in other types of cancer and following a similar strategy, something which has been achieved in this, later research, applied to colon cancer and its metastasis of the liver. 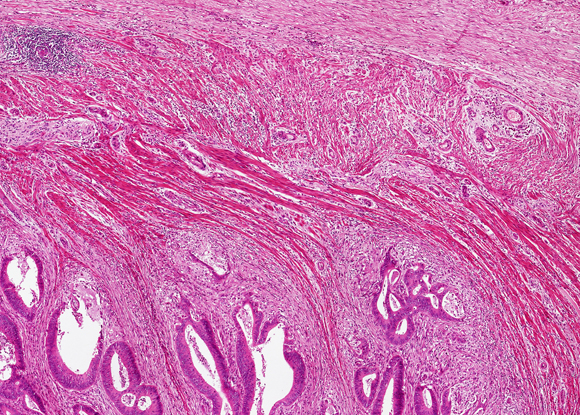 The Basque research consortium is made up of the CIC bioGUNE biociences research centre, the UPV/EHU, the Institute of Genetics and a Molecular and Cell Biology (IGBMC) in Strasbourg (France), and the Ikerchem spin-off Enterprise. Moreover, researchers from the Rocasolano Chemical-Physical Institute, from the CSIC (the Spanish Council for Scientific Research) and from the Novartis Institute for Biomedical Research took part.

“In this project we first designed inhibitors to cell adhesion involved in the metastasis of murine melanomas, and then undertook the chemical synthesis of these molecules, testing their biological potential and activity. What was surprising was that our calculations predicted that, by introducing relatively small changes, we would be able to generate new molecules with the capacity to inhibit cell adhesion involved in another type of cancer. This prediction was confirmed by the experiments, suggesting that these techniques of chemical design and synthesis could be extended to other related therapeutic targets”, stated Dr. Fernando Cossío, UPV/EHU professor and co-founder of Ikerchem S. L., as well as President of the Executive Committee of Ikerbasque.

“Besides its relevance in the control of cancer and metastasis, this research highlights that, in the Basque Country, there are research teams at academic centres and in companies with the necessary experience and skill to tackle multidisciplinary projects of biomedical relevance, combining synthetic and computational chemistry with the structural analysis of the mechanism and the biological validation of the molecules generated”, stated Dr. Francisco Blanco, Ikerbasque lecturer and researcher at CIC bioGUNE.

Impact of cancer and metastasis

Cancer is the second cause of human mortality and its incidence increases with age. Thanks to progress in the early diagnosis and control of detected tumours, enhancing the rate of survival has been achieved and, in this sense, it is believed that further progress can be made in these two aspects of the disease.

The colon is not the organ with the greatest cancer mortality rate, but it gives rise to metastasis of the liver, which is. In fact the liver is the organ where metastasis of tumours originatng in other parts of the body is more frequent. This is because the liver acts as a filter for the blood and the lymph and so cancerous cells flowing in these fluids can be trapped therein.

The lethal danger arising from the migration of cancerous cells throughout the body is what drives researchers in the quest for therapies to halt metastasis.