Mice can inherit learned sensitivity to a smell

When a mouse is trained to become afraid of a certain odor, his or her pups will be more sensitive to that odor as well. Researchers say that knowing how mouse parents can influence their descendants is a step toward understanding how human parents may pass some psychiatric disorders to their children.

Trauma can scar people so indelibly that their children are affected. History provides examples of generations traumatized by war and starvation, whose children experience altered physiology.

Now researchers at Yerkes National Primate Research Center, Emory University have found an instance of animals passing on more specific information about a traumatic experience to their offspring. That information comes not through social communication, but through inheritance. 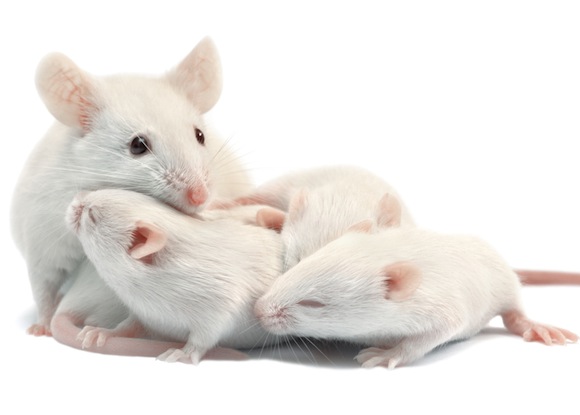 Researchers have found that when a mouse learns to become afraid of a certain odor, his or her pups will be more sensitive to that odor, even though the pups have never encountered it. The results were published online Sunday, Dec. 1 in Nature Neuroscience.

“Knowing how the experiences of parents influence their descendants helps us to understand psychiatric disorders that may have a trans-generational basis, and possibly to design therapeutic strategies,” says senior author Kerry Ressler, MD, PhD, professor of psychiatry and behavioral sciences at Emory School of Medicine.

Dias and Ressler trained mice to become afraid of an odor, by pairing exposure to the odor with a mild electric shock. They then measured how much the animal startled in response to a loud noise at baseline, and in conjunction with presentation of the odor.

Surprisingly, they found that the naïve adult offspring of the sensitized mice also startled more in response to the particular odor that one parent had learned to fear. In addition, they were more able to detect small amounts of that particular odor. Smell-sensitized offspring were not more anxious in general; Dias found that they were not more afraid to explore the exposed areas of a maze.

Dias and Ressler took advantage of previous research on the biology of odor detection. Scientists knew that the chemical acetophenone activates a particular set of cells in the nose and a particular “odorant receptor” gene in those cells. [Acetophenone smells somewhat like cherry blossom.]

Both a father mouse who has been sensitized to a smell and his pups have more space in the smell-processing part of their brains, called the olfactory bulb, devoted to the odor to which they are sensitive (see figure).

Dias found that both mothers and fathers can pass on a learned sensitivity to an odor, although mothers can’t do it with fostered pups, showing that the sensitivity is not transmitted by social interaction. Future mothers receive their odor-shock training before (and not during) conception and pregnancy.

The inheritance takes place even if the mice are conceived by in vitro fertilization, and the sensitivity even appears in the second generation (grandchildren). This indicates that somehow, information about the experience connected with the odor is being transmitted via the sperm or eggs.

Dias discovered that the DNA from the sperm of smell-sensitized father mice is altered. This is an example of an “epigenetic” alteration: transmitted not in the letter-by-letter sequence of the DNA, but in its packaging or chemical modifications.

In mice taught to fear acetophenone, the odorant receptor gene that responds to acetophenone has a changed pattern of methylation: a chemical modification of DNA that tunes the activity of genes. However, it’s not clear whether the changes in that gene are enough to make the difference in an animal’s odor sensitivity.

“While the sequence of the gene encoding the receptor that responds to the odor is unchanged, the way that gene is regulated may be affected,” Ressler says. “There is some evidence that some of the generalized effects of diet and hormone changes, as well as trauma, can be transmitted epigenetically. The difference here is that the odor-sensitivity-learning process is affecting the nervous system – and apparently, reproductive cells too — in such a specific way.”

What the researchers don’t know yet:

Are these effects reversible – if sensitized parents later learn not to be afraid of an odor, will effects still be seen in their pups?

Does it only happen with odors? Could mice trained to be afraid of a particular sound, for example, pass on a sensitivity to that sound?

Do all the sperm or egg cells bear epigenetic marks conveying odor sensitivity?

How does information about odor exposure reach the sperm or eggs?

“We are really just scratching the surface at this point,” Dias says. “Our next goal must be to buffer descendant generations from these effects, Such interventions could form the core of a treatment to prevent the development of neuropsychiatric disorders with roots in ancestral trauma.”