Scientists have named a new species of horned dinosaur (ceratopsian) from Alberta, Canada. 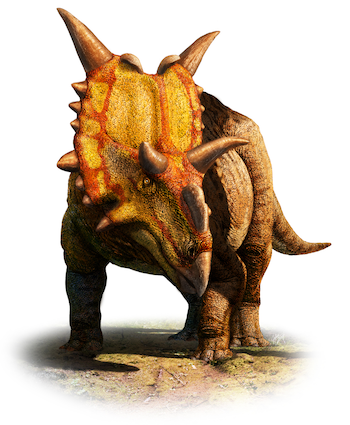 Xenoceratops foremostensis (Zee-NO-Sare-ah-tops) was identified from fossils originally collected in 1958. Approximately 20 feet long and weighing more than 2 tons, the newly identified plant-eating dinosaur represents the oldest known large-bodied horned dinosaur from Canada. Research describing the new species is published in the October 2012 issue of the Canadian Journal of Earth Sciences.

“Starting 80 million years ago, the large-bodied horned dinosaurs in North America underwent an evolutionary explosion,” said lead author Dr. Michael Ryan, curator of vertebrate paleontology at The Cleveland Museum of Natural History. “Xenoceratops shows us that even the geologically oldest ceratopsids had massive spikes on their head shields and that their cranial ornamentation would only become more elaborate as new species evolved.”

Xenoceratops (Xeno + ceratops) means “alien horned-face,” referring to the strange pattern of horns on its head and the scarcity of horned dinosaur fossils from this part of the fossil record. It also honors the Village of Foremost, located close to where the dinosaur was discovered. Xenoceratops had a parrot-like beak with two long brow horns above its eyes. A large frill protruded from the back of its skull featuring two huge spikes.

“Xenoceratops provides new information on the early evolution of ceratopsids, the group of large-bodied horned dinosaurs that includes Triceratops,” said co-author Dr. David Evans of the Royal Ontario Museum and University of Toronto. “The early fossil record of ceratopsids remains scant, and this discovery highlights just how much more there is to learn about the origin of this diverse group.”

The new dinosaur is described from skull fragments from at least three individuals from the Foremost Formation originally collected by Dr. Wann Langston Jr. in the 1950s, and is currently housed in the Canadian Museum of Nature in Ottawa, Canada. Ryan and Evans stumbled upon the undescribed material more than a decade ago and recognized the bones as a new type of horned dinosaur. Evans later discovered a 50-year-old plaster field jacket at the Canadian Museum of Nature containing more skull bones from the same fossil locality and had them prepared in his lab at the Royal Ontario Museum.

This dinosaur is just the latest in a series of new finds being made by Ryan and Evans as part of their Southern Alberta Dinosaur Project, which is designed to fill in gaps in our knowledge of Late Cretaceous dinosaurs and study their evolution. This project focuses on the paleontology of some of the oldest dinosaur-bearing rocks in Alberta, which is less intensely studied than that of the famous badlands of Dinosaur Provincial Park and Drumheller.

“This discovery of a previously unknown species also drives home the importance of having access to scientific collections,” says co-author Kieran Shepherd, curator of paleobiology for the Canadian Museum of Nature, which holds the specimen. “The collections are an untapped source of new material for study, and offer the potential for many new discoveries.”

Via Canadian Journal of Earth Sciences