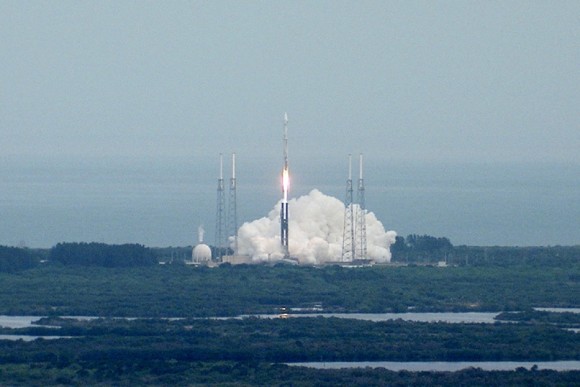 A NASA mission that will investigate how Mars lost its atmosphere and abundant liquid water launched into space at 1:28 p.m. EST Monday from Cape Canaveral Air Force Station in Florida.

The agency’s Mars Atmosphere and Volatile Evolution (MAVEN) spacecraft separated from an Atlas V Centaur rocket’s second stage 53 minutes after launch. The solar arrays deployed approximately one hour after launch and currently power the spacecraft. MAVEN now is embarking on a 10-month interplanetary cruise before arriving at Mars next September.

“MAVEN joins our orbiters and rovers already at Mars to explore yet another facet of the Red Planet and prepare for human missions there by the 2030s,” NASA Administrator Charles Bolden said. “This mission is part of an integrated and strategic exploration program that is uncovering the mysteries of the solar system and enabling us to reach farther destinations.”

In the next four weeks, MAVEN will power on and check out each of its eight instruments. Upon arrival at Mars in September, the spacecraft will execute an orbit insertion maneuver, firing six thrusters that will allow it to be captured by Mars’ orbit. In the following five weeks, MAVEN will establish itself in an orbit where it can conduct science operations, deploy science appendages, and commission all instruments before starting its one-Earth-year scientific primary mission.

“After 10 years of developing the mission concept and then the hardware, it’s incredibly exciting to see MAVEN on its way,” said Bruce Jakosky, principal investigator at the University of Colorado Boulder’s Laboratory for Atmospheric and Space Physics (CU/LASP) in Boulder, Colo. “But the real excitement will come in 10 months, when we go into orbit around Mars and can start getting the science results we planned.”

MAVEN is traveling to Mars to explore how the Red Planet may have lost its atmosphere over billions of years. By analyzing the planet’s upper atmosphere and measuring current rates of atmospheric loss, MAVEN scientists hope to understand how Mars transitioned from a warm, wet planet to the dry desert world we see today.

“The team overcame every challenge it encountered and still kept MAVEN on schedule and on budget,” said David Mitchell, MAVEN project manager at NASA’s Goddard Space Flight Center in Greenbelt, Md. “The government, industry and university partnership was determined and focused to return to Mars sooner, not later.”

MAVEN’s principal investigator is based at CU/LASP. The university provided science instruments and leads science operations, as well as education and public outreach, for the mission. Goddard manages the project and provided two of the science instruments for the mission. Lockheed Martin built the spacecraft and is responsible for mission operations. The University of California at Berkeley’s Space Sciences Laboratory provided science instruments for the mission. NASA’s Jet Propulsion Laboratory in Pasadena, Calif., provides navigation support, Deep Space Network support, and Electra telecommunications relay hardware and operations. Launch management is the responsibility of NASA’s Launch Services Program at the Kennedy Space Center in Florida.