Cassini spacecraft images show the development of the largest storm seen on the planet since 1990. On Saturn, not only are storms much bigger than on Earth, they’re far more violent, with vertical winds of more than 300 miles per hour.

Once every 30 years or so, or roughly one Saturnian year, a monster storm rips across the northern hemisphere of the ringed planet. 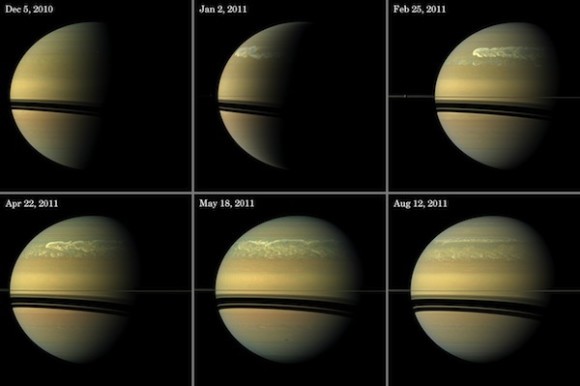 This series of images from NASA’s Cassini spacecraft shows the development of the largest storm seen on the planet since 1990. These true-color and composite near-true-color views chronicle the storm from its start in late 2010 through mid-2011, showing how the distinct head of the storm quickly grew large but eventually became engulfed by the storm’s tail. Image credit: NASA/JPL-Caltech/Space Science Institute

In 2010, the most recent and only the sixth giant storm on Saturn observed by humans began stirring. It quickly grew to superstorm proportions, reaching 15,000 kilometers (more than 9,300 miles) in width and visible to amateur astronomers on Earth as a great white spot dancing across the surface of the planet.

Now, thanks to near-infrared spectral measurements taken by NASA’s Cassini orbiter and analysis of near-infrared color signatures by researchers at UW-Madison, Saturn’s superstorm is helping scientists flesh out a picture of the composition of the planet’s atmosphere at depths typically obscured by a thick high-altitude haze.

The key finding: cloud particles at the top of the great storm are composed of a mix of three substances: water ice, ammonia ice, and an uncertain third constituent that is possibly ammonium hydrosulfide. According to the Wisconsin researchers, the observations are consistent with clouds of different chemical compositions existing side-by-side, although a more likely scenario is that the individual cloud particles are composed of two or all three of the materials.

Writing in the current edition (Sept. 9, 2013) of the journal Icarus, a team led by UW-Madison Space Science and Engineering Center planetary scientists Lawrence Sromovsky, and including Kevin Baines and Patrick Fry, reports the discovery of the icy forms of water and ammonia. Water in the form of ice has never before been observed on Saturn.

“We think this huge thunderstorm is driving these cloud particles upward, sort of like a volcano bringing up material from the depths and making it visible from outside the atmosphere,” explains Sromovsky, a senior scientist at UW-Madison and an expert on planetary atmospheres. “The upper haze is so optically pretty thick that it is only in the stormy regions where the haze is penetrated by powerful updrafts that you can see evidence for the ammonia ice and the water ice. Those storm particles have an infrared color signature that is very different from the haze particles in the surrounding atmosphere.”

Scientists believe Saturn’s atmosphere is a layered sandwich of sorts, with a deck of water clouds at the bottom, ammonia hydrosulfide clouds in the middle, and ammonia clouds near the top, just below an upper tropospheric haze of unknown composition that obscures almost everything.

The latest great storm on Saturn and the presence of the Cassini probe now orbiting the planet gave scientists a chance to peek beneath the haze and learn more about the dynamics and chemical composition of the planet’s deep atmosphere.

First noticed by amateur astronomers, the massive storm works like the much smaller convective events on Earth, where air and water vapor are pushed high into the atmosphere, resulting in the towering, billowing clouds of a thunderstorm. On Saturn, not only are the storms much bigger, they are far more violent, with models predicting vertical winds of more than 300 miles per hour for these rare giant storms.

The effect, Sromovsky says, is to loft the aerosols found deep in the atmosphere to the visible cloud tops, providing a rare glimpse of normally hidden materials. “It starts at the water cloud level and develops a huge convective tower. It is similar to a big thunderstorm, only 10 to 20 times taller and covering an even greater area,” he explains.

The new work helps validate the models of Saturn’s great storms as well as previous observations that detected water and ammonia in vapor form. The presence of water ice, he says, supports the idea that Saturn’s superstorms are powered by condensation of water and originate deep in the atmosphere, about 200 kilometers below the visible cloud deck.

“The water could only have risen from below, driven upward by powerful convection originating deep in the atmosphere. The water vapor condenses and freezes as it rises. It then likely becomes coated with more volatile materials like ammonium hydrosulfide and ammonia as the temperature decreases with their ascent,” Sromovsky adds.

The interesting effect, he notes, is that in Saturn’s massive storm, at least, the observations can be matched by having particles of mixed composition, or clouds of water ice existing side-by-side with clouds of ammonia ice. In the latter scenario, water ice would make up 22 percent of the cloud head and ammonia ice 55 percent. The remaining fraction would be made up by the third constituent, which though less certain, is believed to be ammonia hydrosulfide.

“Up until now, there have been no quantitative calculations of spectra for cloud structures and compositions that matched the observed spectrum of an actual storm cloud feature,” says Sromovsky.