A type of marine algae could become bigger as increasing carbon dioxide emissions are absorbed by the oceans, according to new research.

The study, published this month in PLoS ONE, investigated how a strain of the coccolithophore Emiliania huxleyi might respond if all fossil fuels are burned by the year 2100 – predicted to drive up atmospheric CO2 levels to over four times the present day. Specimens grown under this high CO2 scenario were compared with specimens grown under present day CO2 levels.

Coccolithophores are microscopic algae that form the base of marine food chains. They secrete calcite shells which eventually sink to the seafloor and form sediments, drawing down and locking away carbon in rocks. Because of their calcitic shells, some species have been shown to be sensitive to ocean acidification, which occurs when increasing amounts of atmospheric CO2 are absorbed by the ocean, increasing seawater acidity. 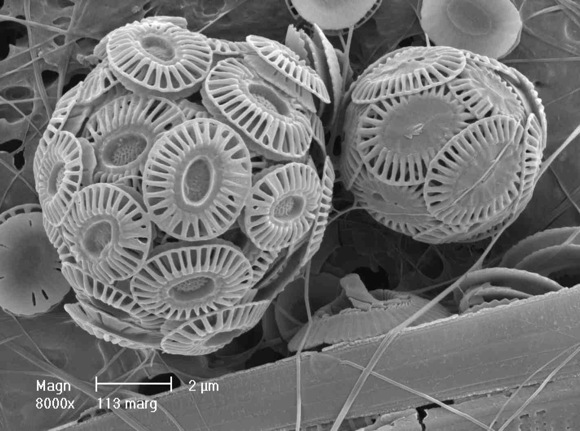 But these findings suggest that not all coccolithophore species respond to ocean acidification in the same way.

“Contrary to many studies, we see that this species of coccolithophore gets bigger and possesses more calcite under worst-case scenario CO2 levels for the year 2100,” says Dr Bethan Jones, lead author and former researcher at University of Southampton Ocean and Earth Science, which is based at NOCS. “They do not simply dissolve away under high CO2 and elevated acidity.”

However, the researchers also observed that cells grew more slowly under the high CO2 scenario, which could be a sign of stress.

The researchers also tested for changes in protein abundance – using a technique developed by the collaborating institutes – as well as other biochemical characteristics. They detected very few differences between the two scenarios, indicating that apart from growth, this strain of coccolithophore does not seem to be particularly affected by ocean acidification.

Co-author Professor Iglesias-Rodriguez, formerly at University of Southampton Ocean and Earth Science, says: “This study suggests that this strain of Emiliania huxleyi possesses some resilience to tolerate future CO2 scenarios, although the observed decline in growth rate may be an overriding factor affecting the success of this ecotype in future oceans. This is because if other species are able to grow faster under high CO2, they may ‘outgrow’ this type of coccolithophore. 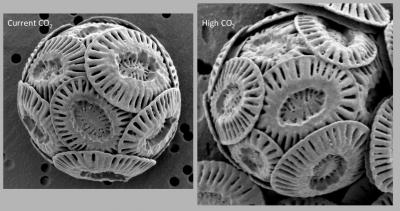 “Given that chalk production by calcifiers is the largest carbon reservoir on Earth – locking away atmospheric CO2 in ocean sediments – understanding how coccolithophores respond to climate change is a first step in developing models to predict their fate under climate pressure such as ocean acidification.”

The team used a technique called ‘shotgun proteomics’, optimised for marine microbiological research at the University of Southampton’s Centre for Proteomic Research, to detect changes in proteins under the different CO2 scenarios.