Looking down from orbit is an attractive way of monitoring historical sites in remote or politically unstable regions – and can even help archaeologists to make new discoveries.

The ancient city of Samarra was a powerful Islamic capital during the ninth century, located in what is today Iraq. It is the only surviving Islamic capital that retains its original plan, architecture and arts, although only about 20% of the site has been excavated.

In 2007, during the height of the Iraq War, it was named a UNESCO World Heritage Site in Danger because of the responsible authorities’ inability to control and manage its conservation. 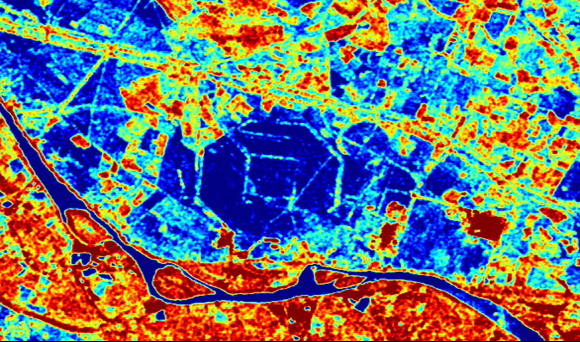 Radarsat-2 entropy image and archaeological map over the octagonal city plan of part of ancient Samarra, located about 130 km north of Baghdad, Iraq. These results were found by Nicole Dore using the remote sensing technique Polarimetric SAR in a collaboration between Italy’s La Sapienza and France’s Rennes 1 universities. Credit: Satellite image: VigiSAT; Map: A. Northedge, 2007 The Historical Topography of Samarra. Samarra studies I.

That same year, insurgents launched a second attack on the city’s mosque and damaged the clock tower.

Monitoring sites like Samarra during periods of political instability is both difficult and dangerous for archaeologists. Satellites, however, offer a non-invasive solution to monitor these remnants of the past, and can even help to identify new areas to excavate.

The most obvious way to keep tabs on excavated sites from space is with high-resolution optical images. But new techniques reveal that satellites carrying radars can also see how underground structures influence the soil. 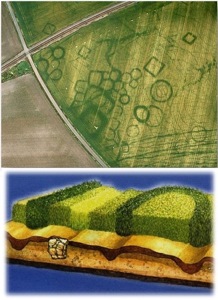 Radar is sensitive to properties like slight differences in soil density and water content – things the human eye cannot see. Changes in soil moisture and in vegetation growth can also be detected by radar. These factors are influenced by underground structures and can be used to infer historical features.

Radar can also see through clouds and darkness, providing consistent observations day or night and under all atmospheric conditions.

Radar imagery is complex, so not all radar detections can be easily explained. But some of these detections may identify unexcavated sites.

Along the Nile River in Sudan’s Northern state, tombs, temples and living complexes make up the Gebel Barkal archaeological sites. Registered on the UNESCO World Heritage List, they are testimony to the Napatan and Meroitic cultures of about 900 BC to 350 AD. 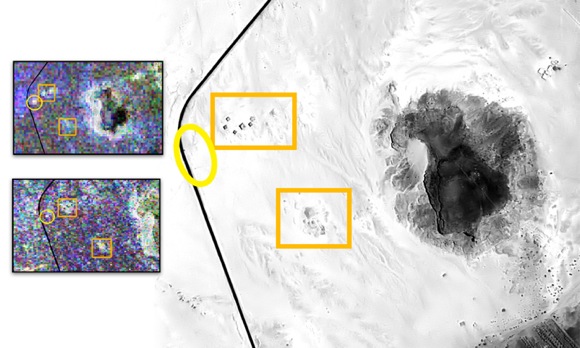 Using the remote sensing technique Polarimetric SAR, observations from radars on ALOS in 2006 (top left) and on Radarsat-2 in 2012 (bottom left) show where the known archaeological sites are located (in orange square). However, the results showed that something else may be lying beneath the soil (encircled in yellow) that was not present on optical imagery (right). These results were found by Jolanda Patruno using the remote sensing technique Polarimetric SAR in a collaboration between Italy’s La Sapienza and France’s Rennes 1 universities. Credit: Satellite SAR image: JAXA (top), VigiSAT (bottom), KARI/ESA (right); underlying satellite optical image: ESA

Using the ‘polarimetric synthetic aperture radar’ technique, scientists from Italy’s La Sapienza and France’s Rennes 1 universities were able to look at the pyramids and temples of Gebel Barkal. Their observations not only allowed them to monitor the site remotely during a time of political instability, but revealed that there may be more beneath that soil that has not yet been excavated.

Satellite observations can also be useful for monitoring and identifying buried archaeological structures in densely populated areas. In Rome, Italy, major ancient sites like the Colosseum and Roman Forum are part of the cityscape. But there are also hidden treasures beneath the hustle and bustle of the modern metropolis.

A student from Italy’s Tor Vergata University has found that optical satellite imagery can reveal buried archaeological features in the eastern outskirts of Rome due to differences in the spectral reflection (particularly in the near-infrared) of the overlying vegetation.

Future missions such as Japan’s ALOS-2 satellite, scheduled for launch this year, will build on previous missions with their unique capabilities to further archaeology from space. ESA’s Biomass candidate mission would also contribute with its novel radar.