Large amounts of snow to cities including Baltimore, Maryland and Washington, D.C. area on March 2 and 3, according to NOAA’s National Weather Service. 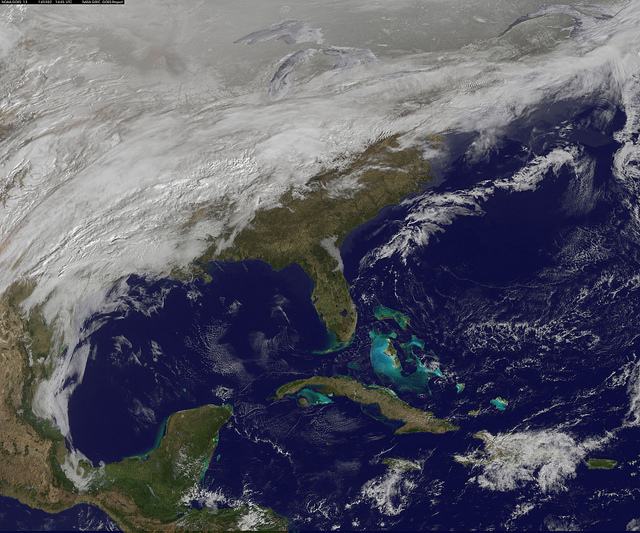 Cloud data from NOAA’s GOES-East satellite were overlaid on a true-color image of land and ocean created by data from the MODIS instrument that flies aboard NASA’s Aqua and Terra satellites. Together, those data created the entire picture of the position of this major winter storm on March 2, 2014. Image via Rob Gutro/ NASA Goddard Space Flight Center, Greenbelt, Md.

A major winter storm is poised to wallop the U.S. Mid-Atlantic states bring large amounts of snow to cities including Baltimore, Md., Washington, D.C. area on March 2 and 3, according to NOAA’s National Weather Service. NOAA’s GOES-East satellite captured this image on March 2, 2014 of the clouds associated with the winter storm as it continued moving east toward those cities.

The NWS Short Range Forecast Discussion stated “A strong storm over the Southern Plains/Lower Mississippi Valley will advance northeastward along a quasi-stationary front to off the Southern Mid-Atlantic Coast by Monday evening. Moisture from the Gulf of Mexico will overrun and pool along the associated front producing an area of snow extending from the Central Plains into the Northeast.”

The clouds are associated with a cold from that stretches from eastern Maine through Maryland and west into the Tennessee Valley. The low pressure center associated with the front was located over Arkansas.