Scientists have pinpointed the lowest temperature at which simple life can live and grow.

The study, published in PLoS One, reveals that below -20 °C, single-celled organisms dehydrate, sending them into a vitrified – glass-like – state during which they are unable to complete their life cycle.

The researchers propose that, since the organisms cannot reproduce below this temperature, -20 °C is the lowest temperature limit for life on Earth.

Scientists placed single-celled organisms in a watery medium, and lowered the temperature. As the temperature fell, the medium started to turn into ice and as the ice crystals grew, the water inside the organisms seeped out to form more ice. This left the cells first dehydrated, and then vitrified. Once a cell has vitrified, scientists no longer consider it living as it cannot reproduce, but cells can be brought back to life when temperatures rise again. This vitrification phase is similar to the state plant seeds enter when they dry out.

‘The interesting thing about vitrification is that in general a cell will survive, where it wouldn’t survive freezing, if you freeze internally you die. But if you can do a controlled vitrification you can survive,’ says Professor Andrew Clarke of NERC’s British Antarctic Survey , lead author of the study. ‘Once a cell is vitrified it can continue to survive right down to incredibly low temperatures. It just can’t do much until it warms up.’ 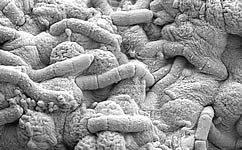 More complex organisms are able to survive at lower temperatures because they are able to control the medium the cells sit in to some extent.

‘Bacteria, unicellular algae and unicellular fungi – of which there are a huge amount in the world-are free-living because they don’t rely on other organisms ,’ Clarke explains.

‘Everything else, like trees and animals and insects, has the ability to control the fluid that surrounds their internal cells. In our case it’s blood and lymph. In a complicated organism the cells sit in an environment that the organism can control. Free-living organisms don’t have this; if ice forms in the environment they are subject to all the stresses that implies.’

If a free-living cell cools too quickly it would be unable to dehydrate and vitrify; instead it would freeze and wouldn’t survive.

This goes some way towards explaining why preserving food using deep freezing works. Most fridge freezers operate at a temperature of nearly -20 °C . This study shows that this temperature works because moulds and bacteria are unable to multiply and spoil food.

‘We were really pleased that we had a result which had a wider relevance, as it provided a mechanism for why domestic freezers are as successful as they are,’ Clarke says.

The scientists believe that the temperature limit they have discovered is universal, and below -20°C simple forms of unicellular life cannot grow on Earth. During the study they looked at a wide range of single-celled organismsthat use a variety of different energy sources, from light to minerals, to metabolise. Every single type vitrified below this temperature.

‘When you have a single-celled organism and cool it until ice forms in the external medium, in every case we looked at the cells dehydrated and then vitrified between -10°C and -25 °C. There were no exceptions,’ explains Clarke.

This study was supported by funding from NERC, the European Research Council, and the National de la Recherche Agronomique.