Link between stars’ ages and their orbits

Astronomers have determined the orbital motion of two distinct populations of stars in an ancient globular star cluster, offering proof they formed at different times.

Researchers led by Harvey Richer of the University of British Columbia in Vancouver combined recent Hubble observations with eight years’ worth of data from the telescope’s archive to determine the motions of the stars in the globular cluster 47 Tucanae, which is located about 16,700 light-years away in the southern constellation Tucana. 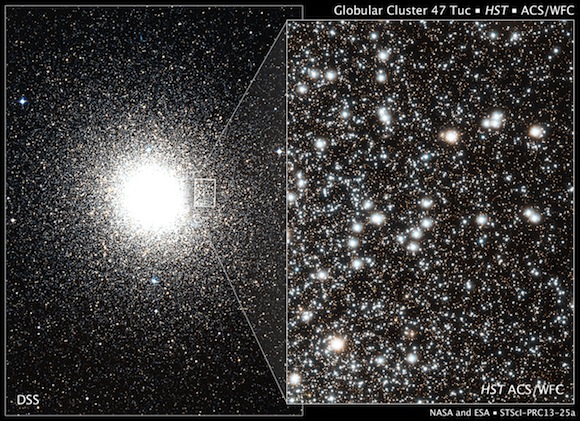 These images showcase the ancient globular cluster 47 Tucanae, a dense swarm of up to a million stars. The entire cluster (left) was taken by the U.K. Schmidt Telescope Oct. 12, 1977 and Sept. 9, 1989. NASA’s Hubble Space Telescope image in rectangular box was taken between January and October 2010
Image Credit: NASA, ESA, DSS,STScI/AURA/UKSTU/AAO,Univ. of Br. Columbia

The analysis enabled researchers, for the first time, to link the movement of stars in the clusters with the stars’ ages. The two populations in 47 Tucanae differ in age by less than 100 million years.

“When analyzing the motions of stars, the longer the time baseline for observations, the more accurately we can measure their motion,” said Richer. “These data are so good, we can actually see the individual motions of the stars in the cluster. The data offer detailed evidence to help us understand how various stellar populations formed in such clusters.”

Richer and his team used Hubble’s Advanced Camera for Surveys to observe the cluster in 2010. They combined those observations with 754 archival images to measure the change in position of more than 30,000 stars. Using these data, they could discern how fast the stars move. The team also measured the stars’ brightness and temperatures.

The lack of heavier elements in the redder stars reflects the initial composition of the gas that formed the cluster. After the most massive of these stars completed their stellar evolution, they expelled gas enriched with heavier elements back into the cluster. This gas collided with other gas and formed a second, more chemically enriched generation of stars that was concentrated toward the cluster center. Over time these stars moved slowly outward into more elliptical orbits.

The team’s results are published in the July 1 issue of The Astrophysical Journal Letters.