Life may be harder to identify on some exoplanets

High levels of atmospheric oxygen are a promising indicator for life on exoplanets. But some exoplanets may have significant levels of oxygen, even without life.

Finding life on exoplanets may be more difficult than people thought, according Dr. Feng Tian of the Center for Earth System Science at Tsinghua University in Beijing, China. His report – which may shed light on how and where life could be identified on exoplanets – is being presented today (October 7, 2013) to the American Astronomical Society Division for Planetary Sciences meeting in Denver, Colorado.

Current efforts to find exoplanets with the potential to harbor life (habitable planets) and exoplanets with life (inhabited planets) focus on smaller stars than the sun, because these so called M dwarfs or red dwarfs make up more than 75% of stars in the solar neighborhood. Therefore it may be possible to find habitable planets around these small stars with the current level of technology.

Thus searching for habitable planets around M dwarfs is considered the fast track to find a second Earth. High levels of atmospheric oxygen are considered the most promising indicator for life on exoplanets.

However recent observations using the Hubble Space Telescope, of several planet-hosting M dwarfs, show that the ultraviolet (UV) properties of these small stars are quite different from those of our sun. Using the observed UV spectrum of the M dwarf star Gliese 876 – the third-closest known star to the sun confirmed to possess a planetary system – Dr. Feng Tian and colleagues in the U.S. and Argentina have shown that the atmospheres of a hypothetical habitable planet around Gliese 876 could build up significant levels of oxygen even in the absence of life.

“In this case the atmosphere of a lifeless planet can be close to that of the Earth’s 2.2 billion years ago, after the so called Great Oxidation Event in Earth’s geological history,” said Feng Tian. 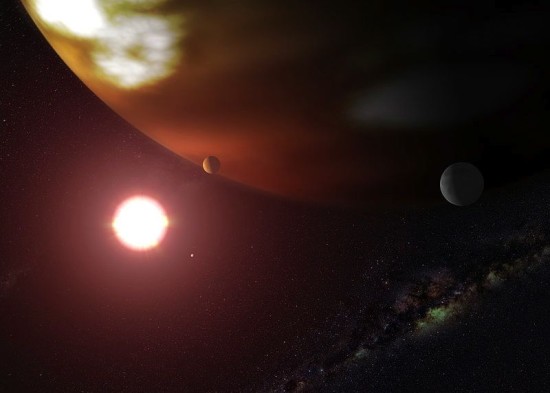 This is an artist’s concept of a gas giant planet orbiting the cool, red dwarf star Gliese 876, located 15 light-years away. Via Wikimedia Commons. 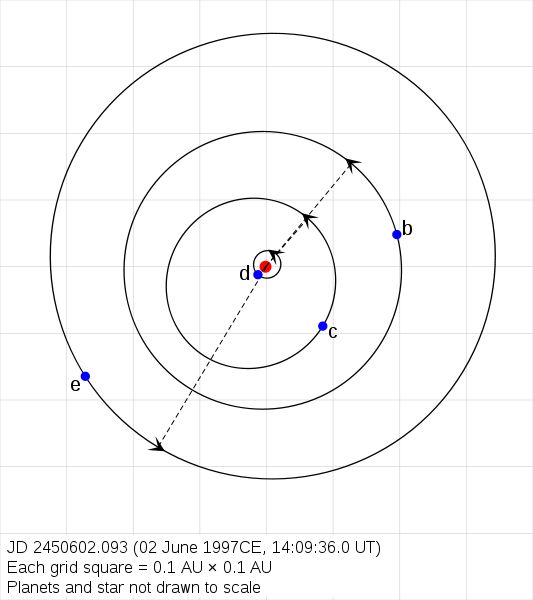 Plot of the orbits of the planets in the Gliese 876 system. Plot via Wikimedia Commons.

In today’s report, Feng Tian and his colleagues further studied Earth-mass planets using the UV spectra of 4 other M dwarfs, including Gliese 667C which contains 3 potentially habitable planets. These studies provided further support to their previous claim: “Before we can claim the discovery of life on exoplanets, we have to examine the stars harboring these planets more carefully.”

“Prof. Feng Tian’s research addresses one of the most important questions of contemporary astrophysics and indeed of great interest to the general public: Are there other habitable planets near Earth, and is there any evidence that they are indeed inhabited?” commented Professor Jeffrey Linsky of the University of Colorado at Boulder.

“The authors of this paper make an important point regarding the confidence we could have in the detection of O2 simultaneously with H2O and CO2, as a biosignature in the spectrum of an Earth-like exoplanet around an M star,” commented Dr. Alain Leger of the Institut d’Astrophysique Spatiale at Université Paris XI, France.

Like all new findings, the work requires further confirmation by other scientists. Dr. Leger said: “This is somewhat sending the cat among the pigeons in our confidence in the O2, H2O, and CO2 biosignature, but in a limited way. It concerns only M stars and the presence of O2 in small amounts.”

“The effects of stellar flares on the atmosphere of the hypothetical Earth-like planet around Gliese 876 have not been considered in this work…. At this point, we do not have a sufficient understanding of the amplitude and frequency of such flares on older, low-mass exoplanet host stars to make predictions about their impact on the production of biomarker signatures,” said Dr. Kevin France, a coauthor of the work from the University of Colorado at Boulder.

Although the observed M dwarfs all present UV properties quite different from the sun, more can be learned by longer exposures on more stars with the potential to harbor habitable planets, these scientists say.