This is the first unambiguous detection of water vapor around an object in the asteroid belt. 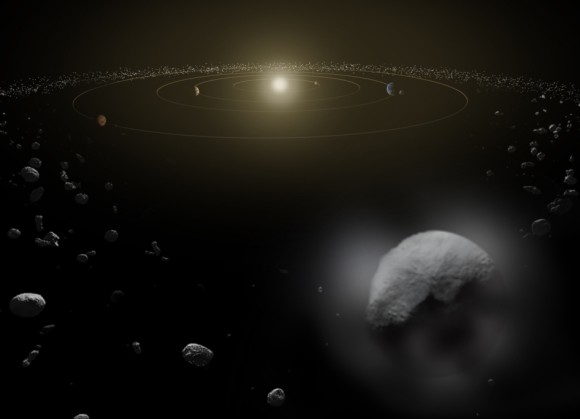 An artist’s concept of Ceres with vaporous jets in the asteroid belt. Image credit: ESA/ATG medialab

Scientists using the Herschel Space Observatory have made the first definitive detection of water vapor on the largest and roundest object in the asteroid belt, dwarf planet Ceres. Ceres is located in the main asteroid belt, between the orbits of Mars and Jupiter.

The scientists say that Ceres possesses significant quantities of water ice on or below its surface that gets heated by solar energy, shooting plumes of water vapor out into space.

For the last century, Ceres was known as the largest asteroid in our solar system. But in 2006, the International Astronomical Union, the governing organization responsible for naming planetary objects, reclassified Ceres as a dwarf planet because of its large size. It is roughly 590 miles (950 kilometers) in diameter. When it first was spotted in 1801, astronomers thought it was a planet orbiting between Mars and Jupiter. Later, other cosmic bodies with similar orbits were found, marking the discovery of our solar system’s main belt of asteroids.

Scientists believe Ceres contains rock in its interior with a thick mantle of ice that, if melted, would amount to more fresh water than is present on all of Earth. The materials making up Ceres likely date from the first few million years of our solar system’s existence and accumulated before the planets formed.

Until now, ice had been theorized to exist on Ceres but had not been detected conclusively. It took Herschel’s far-infrared vision to see, finally, a clear spectral signature of the water vapor. Michael Küppers of ESA in Spain is lead author of a paper in the journal Nature. He said:

This is the first time water vapor has been unequivocally detected on Ceres or any other object in the asteroid belt and provides proof that Ceres has an icy surface and an atmosphere.

The results come at the right time for NASA’s Dawn mission, which is scheduled to arrive at Ceres in the spring of 2015, where it will take the closest look ever at its surface.