Inspiration from a porcupine’s quills

Anyone unfortunate enough to encounter a porcupine’s quills knows that once they go in, they are extremely difficult to remove. Researchers at MIT and Brigham and Women’s Hospital now hope to exploit the porcupine quill’s unique properties to develop new types of adhesives, needles and other medical devices.

In a new study, the researchers characterized, for the first time, the forces needed for quills to enter and exit the skin. They also created artificial devices with the same mechanical features as the quills, raising the possibility of designing less-painful needles, or adhesives that can bind internal tissues more securely. 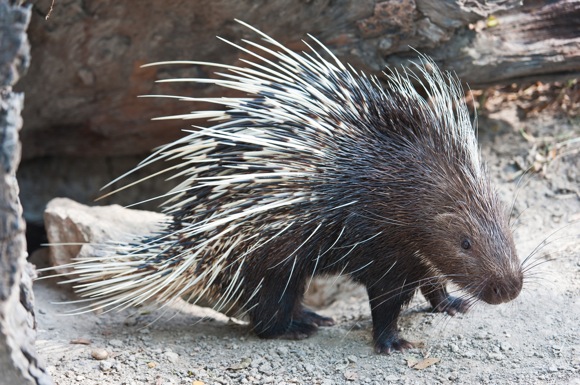 There is a great need for such adhesives, especially for patients who have undergone gastric-bypass surgery or other types of gastric or intestinal surgery, according to the researchers. These surgical incisions are now sealed with sutures or staples, which can leak and cause complications.

“With further research, biomaterials modeled based on porcupine quills could provide a new class of adhesive materials,” says Robert Langer, the David H. Koch Institute Professor at MIT and a senior author of the study, which appears this week in the Proceedings of the National Academy of Sciences.

Jeffrey Karp, an associate professor of medicine at Harvard Medical School and co-director of the Center for Regenerative Therapeutics at Brigham and Women’s Hospital, is also a senior author of the paper. Lead author is Woo Kyung Cho, a postdoc in the Harvard-MIT Division of Health Sciences and Technology (HST).

Aside from stitches and sutures, doctors sometimes use medical-grade superglue to bind tissue together, Karp says. However, those glues can be toxic, or provoke an inflammatory response.

To create adhesives that would work in the body without producing adverse reactions, the research team turned to nature for inspiration. “We believe that evolution is the best problem-solver,” Karp says.

In this case, they became interested in the North American porcupine, which has about 30,000 barbed quills to defend against predators. Each quill is several centimeters long; the four millimeters at the very tip are covered in microscopic barbs. 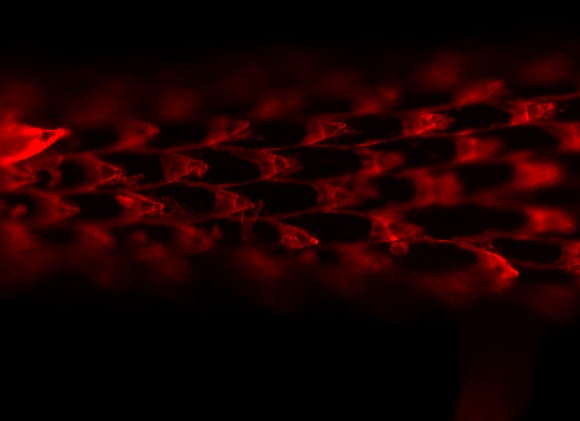 This fluorescent microscope image shows the tiny barbs that coat the tip of a porcupine’s quills. Image: Woo Kyung Cho

To their surprise, the researchers found that despite the difficulty of removing the quills, they require very little force to penetrate tissue. Compared to quills with no barbs, the barbed quills require about 50 percent less force to penetrate muscle tissue.

The team then set out to determine how the quills achieve this unique combination of easy penetration and difficult removal. “By understanding the mechanism, we can design an artificial system in the right way,” Cho says.

They found that the tiny barbs at the end of the quill are the key to both ease of penetration and resistance to removal. While the quill is entering tissue, the barbs act to localize the penetration forces, allowing them to tear through tissue fibers much more easily — just as a serrated knife cuts through tomato skin far more cleanly than a straight-edged knife.

The discovery that barbed quills require so little force to penetrate skin is both unexpected and fascinating, says Michael Longaker, a professor of surgery at Stanford University School of Medicine. Devices that mimic the quills could be very helpful in securing tissue during and after surgery, he says. “That combination of ‘easy to get in’ and ‘difficult to pull out’ would be really appealing,” says Longaker, who was not part of the research team.

To explore the possibility of making stronger adhesives, the researchers created a patch with an array of barbed quills on one side. They found that the energy required to remove this patch was 30 times greater than that needed for a control patch, which had quills but no barbs.

The system could also be tweaked so that it penetrates tissue easily but is not as difficult to remove as a porcupine quill, enabling design of less-painful needles for injections. “If you can still create the stress concentrations but without having a barb that catches tissue on removal, potentially you could create something with just easy insertion, without the adhesion,” says James Ankrum, a graduate student in HST and an author of the paper.

Langer and Karp introduced the concept of gecko-inspired medical bandages in 2008; however, “these require a reactive glue to adhere to wet tissues, while porcupine-quill-inspired adhesives attach to tissues beautifully without requiring the use of reactive chemistry,” Karp says. “They are extremely versatile and potentially universal in their application.”

The researchers are now working on making quill-inspired adhesives from biodegradable materials, which could be broken down inside the body after they are no longer needed.