A team of Italian researchers has developed a new imaging technique that uses infrared (IR) digital holography to peer through chaotic conflagrations and capture potentially lifesaving and otherwise hidden details.

Firefighters put their lives on the line in some of the most dangerous conditions on Earth. One of their greatest challenges, however, is seeing through thick veils of smoke and walls of flame to find people in need of rescue. A team of Italian researchers has developed a new imaging technique that uses infrared (IR) digital holography to peer through chaotic conflagrations and capture potentially lifesaving and otherwise hidden details. The team describes its breakthrough results and their applications in a paper published today in the Optical Society’s (OSA) open-access journal Optics Express.

Firefighters can see through smoke using current IR camera technology. However, such instruments are blinded by the intense infrared radiation emitted by flames, which overwhelm the sensitive detectors and limit their use in the field. By employing a specialized lens-free technique, the researchers have created a system that is able to cope with the flood of radiation from an environment filled with flames as well as smoke. 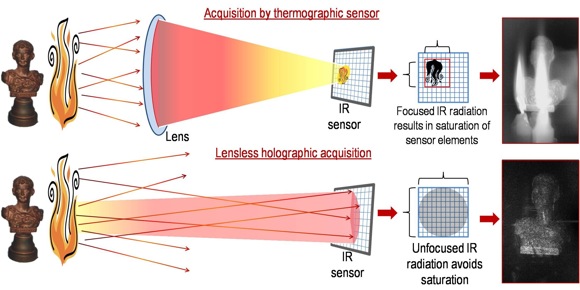 To see through smoke, scientists employ lenses to collect and focus light, but using the same technique with flames results in saturation in some areas of the resulting image (top). The new system does not employ a lens, so collected light is distributed over the whole array of camera pixels, avoiding this saturation and the blind spots it produces (bottom). Credit: Optics Express.

“IR cameras cannot ‘see’ objects or humans behind flames because of the need for a zoom lens that concentrates the rays on the sensor to form the image,” says Pietro Ferraro of the Consiglio Nazionale delle Ricerche (CNR) Istituto Nazionale di Ottica in Italy. By eliminating the need for the zoom lens, the new technique avoids this drawback.

“It became clear to us that we had in our hands a technology that could be exploited by emergency responders and firefighters at a fire scene to see through smoke without being blinded by flames, a limitation of existing technology,” Ferraro says. “Perhaps most importantly, we demonstrated for the first time that a holographic recording of a live person can be achieved even while the body is moving.” 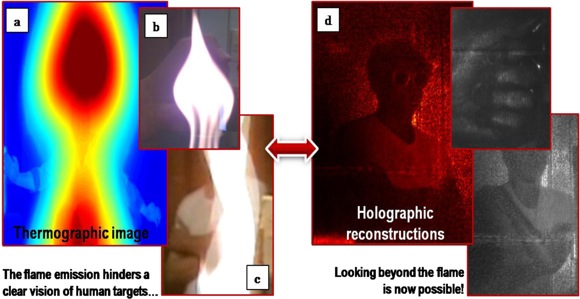 Two images of a live human subject as seen through flames. When viewed in infrared or white light, the man is almost completely occluded (left). The new system reproduces the image behind the flames using holography, revealing a man wearing a t-shirt and glasses (right). Credit: Optics Express.

In the researchers’ new imaging system, a beam of infrared laser light is widely dispersed throughout a room. Unlike visible light, which cannot penetrate thick smoke and flames, the IR rays pass through largely unhindered. The IR light does, however, reflect off of any objects or people in the room, and the information carried by this reflected light is recorded by a holographic imager. It is then decoded to reveal the objects beyond the smoke and flames. The result is a live, 3-D movie of the room and its contents.

The next step in moving this technology to the field is to develop a portable tripod-based system that houses both the laser source and the IR camera. The systems may also be suitable for fixed installation inside buildings or tunnels. In addition, the team is exploring other applications, most notably in the biomedical field for non-destructive testing of large aerospace composite structures.

“Besides life-saving applications in fire and rescue, the potential to record dynamic scenes of a human body could have a variety of other biomedical uses including studying or monitoring breathing, cardiac beat detection and analysis, or measurement of body deformation due to various stresses during exercise,” Ferraro says. “We are excited to further develop this technology and realize its application for saving and improving human life.”