“This exceedingly rare triple system, seen when the universe was only 800 million years old, provides important insights into the earliest stages of galaxy formation during a period known as ‘cosmic dawn,’ when the universe was first bathed in starlight,” said Richard Ellis, the Steele Professor of Astronomy at the California Institute of Technology and member of the research team. “Even more interesting, these galaxies appear poised to merge into a single massive galaxy, which could eventually evolve into something akin to the Milky Way.” 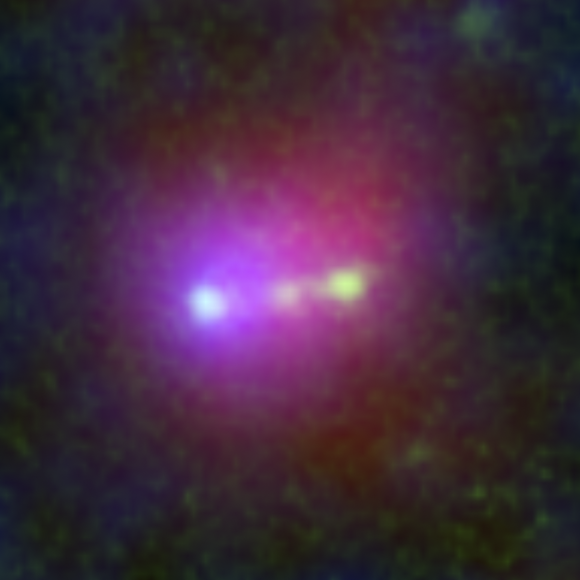 See full size | Composite image of rare triple system – dubbed Himiko – in early universe. Hubble, Spitzer, and Subaru data combined to make this image. A halo of ionized hydrogen gas surrounds the three galaxies. Observations with the Atacama Large Millimeter/submillimeter Array (ALMA) telescope did not detect any telltale signature from carbon, suggesting that these three objects may be very primitive and have not had enough time to seed the intergalactic medium with heavy elements. Credit: NASA/Hubble; NASA/Spitzer; NAOJ/Subaru

Researchers first detected this object, which appeared to be a giant bubble of hot, ionized gas, in 2009. Dubbed Himiko (after a legendary queen of ancient Japan), it is nearly 10 times larger than typical galaxies of that era and comparable in size to our own Milky Way. Subsequent observations with the Spitzer Space Telescope suggested that Himiko might represent a single galaxy, which would make it uncharacteristically massive for that period of the early universe.

“The new observations revealed that, rather than a single galaxy, Himiko harbors three distinct, bright sources, whose intense star formation is heating and ionizing this giant cloud of gas,” said Masami Ouchi, an associate professor at the University of Tokyo who led the international team of astronomers from Japan and the United States. 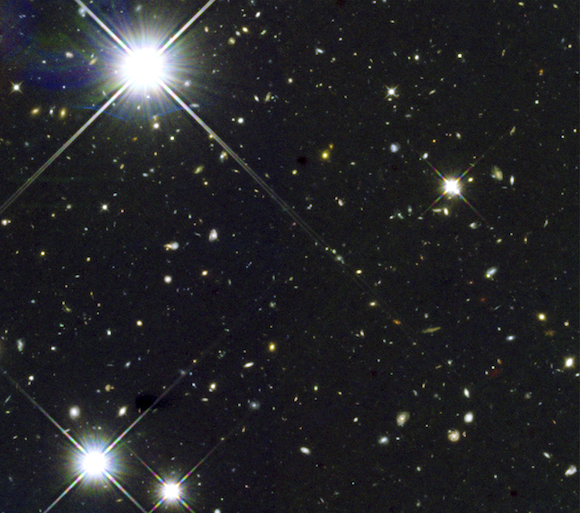 Areas of such furious star formation should be brimming with heavy elements such as carbon, silicon, and oxygen. These elements are forged in the nuclear furnaces of massive, short-lived stars like those bursting into life inside the three galaxies detected by Hubble. At the end of their relatively brief lives, these stars explode as supernovas, seeding the intergalactic medium with a fine dust of heavy elements.

“When this dust is heated by ultraviolet radiation from massive newborn stars, the dust then re-radiates at radio wavelengths,” remarked Kotaro Kohno, a member of the team also with the University of Tokyo. “Such radiation is not detected in Himiko.”

“Surprisingly, observations with ALMA revealed a complete absence of the signal from carbon, which is rapidly synthesized in young stars. Given the sensitivity of ALMA, this is truly remarkable,” said Ouchi. “Exactly how this intense activity can be reconciled with the primitive chemical composition of Himiko is quite puzzling.”

The astronomers speculate that a large fraction of the gas in Himiko could be primordial, a mixture of the light elements hydrogen and helium, which were created in the Big Bang. If correct, this would be a landmark discovery signaling the detection of a primordial galaxy seen during its formation. 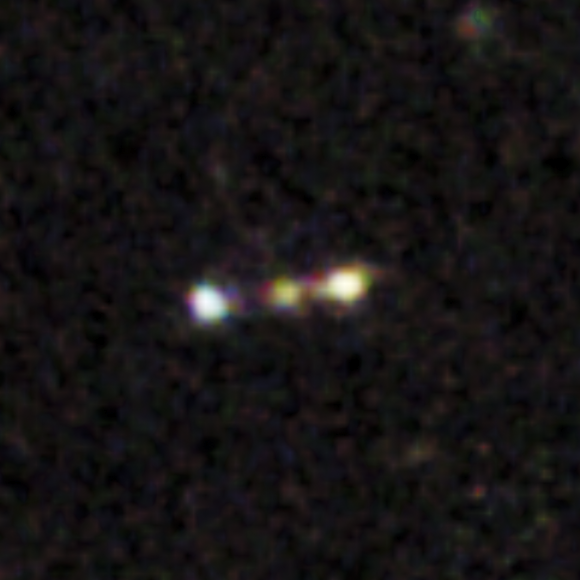 See full size | Himiko as seen with Hubble. The three infant galaxies are clearly resolved where only one was known to exist before. These objects are extremely energetic, suggesting they are undergoing a period of intense star formation. Credit: NASA/Hubble

Ellis summed up the situation: “Astronomers are usually excited when a signal from an object is detected. But, in this case, it’s the absence of a signal from heavy elements that is the most exciting result!”

The ALMA data were taken as part of the early science program with only a portion of the array’s eventual full complement of 66 antennas. Future research with the complete ALMA telescope and the next-generation of ground- and space-based observatories will look even further back in time, shedding more light on the origin and evolution of the first stars and galaxies. The results are accepted for publication in the Astrophysical Journal.