Tigers and bears live in the last great primary forests of Russia’s Far East. So do giant owls.

A study spearheaded by the Wildlife Conservation Society and the University of Minnesota has shown that the world’s largest owl – and one of the rarest – is also a key indicator of the health of some of the last great primary forests of Russia’s Far East. 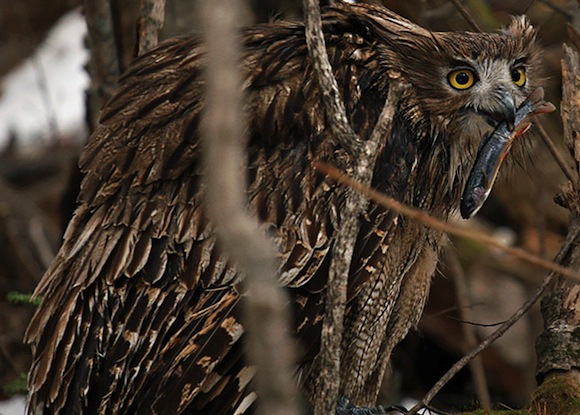 A new study shows that Blakiston’s fish owls are a clear indicator of the health of the forests, rivers, and salmon populations in Russia’s Far East. Image credit: Jonathan C. Slaght

The study found that Blakiston’s fish owl relies on old-growth forests along streams for both breeding and to support healthy populations of their favorite prey: salmon. The large trees provide breeding cavities for the enormous bird, which has a two-meter (six-foot) wingspan. And when these dead, massive trees topple into adjacent streams, they disrupt water flow, forcing the gushing river around, over, and under these new obstacles. The result is stream channel complexity: a combination of deep, slow-moving backwaters and shallow, fast-moving channels that provide important microhabitats critical to salmon in different developmental stages.

The study appears in the October issue of the journal Oryx. Authors include Jonathan Slaght of the Wildlife Conservation Society, R. J. Gutiérrez of the University of Minnesota, and Sergei Surmach of the Institute of Biology and Soils (Russian Academy of Sciences).

The authors studied the foraging and nesting characteristics of Blakiston’s fish owl in Primorye, Russia, where they looked at nesting habitat over 20,213 square kilometers (7,804 square miles). They found that large old trees and riparian old-growth forest were the primary distinguishing characteristics of both nest and foraging sites.

The authors say that management and conservation of old-growth forests is essential for sustaining this species because they are central to the owls’ nesting and foraging behavior. Moreover, conservation of Primorye’s forests and rivers sustains habitat for many other species: including eight salmon and trout species that spawn there; some of the 12 other owl species found in Primorye; and mammals like the endangered Amur (or Siberian) tiger, Asiatic black bear, and wild boar. Listed as Endangered by IUCN, Blakiston’s fish owl is restricted to riparian areas in Russia, China, Japan and possibly North Korea.

“Blakiston’s fish owl is a clear indicator of the health of the forests, rivers, and salmon populations,” said lead author Jonathan Slaght of the Wildlife Conservation Society. “Retention of habitat for fish owls will also maintain habitat for many other species associated with riparian old-growth forests in the Russian Far East.”