Researchers report that river otters in Central Illinois are being exposed to polychlorinated biphenyls (PCBs) and pesticides that were banned in the U.S. in the 1970s and ’80s.

The Illinois Department of Natural Resources collected 23 river otters between 2009 and 2011, after the animals were incidentally killed (hit by cars or accidentally caught in traps, for example). The agency passed the carcasses along to researchers at the Illinois Natural History Survey for analysis, and the University of Illinois Veterinary Diagnostic Laboratory conducted autopsies. 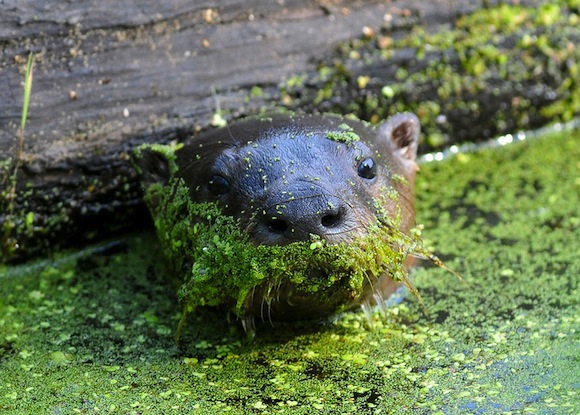 As part of this effort, the research team, led by wildlife technical assistant Samantha Carpenter and wildlife veterinary epidemiologist Nohra Mateus-Pinilla, both with the natural history survey, and U. of I. animal sciences professor Jan Novakofski, looked at liver concentrations of 20 organohalogenated compounds once used in agriculture and industry (all but one of which were later banned). Andreas Lehner, of Michigan State University, conducted the toxicological tests.

The researchers were surprised to find that average concentrations of one of the compounds they analyzed, dieldrin – an insecticide (and byproduct of the pesticide aldrin) that was used across the Midwest before it was banned in 1987 – exceeded those measured in eight river otters collected in Illinois from 1984 to 1989.

Liver concentrations of PCBs and DDE (the latter a breakdown product of the banned pesticide DDT) were similar to those in the earlier study, the researchers report.

“The PCBs, dieldrin and DDE were the contaminants that we detected in highest concentration, in terms of average concentrations,” Carpenter said. “And male river otters had significantly higher concentrations of PCBs compared to females.”

PCBs were once used as insulators and coolants in motors and electrical systems, but were banned in 1979 in the U.S. after studies found that exposure to these compounds caused cancer and other deleterious health effects in animals. PCBs are classified as “probable human carcinogens” and there are fish consumption advisories for this contaminant in many Illinois rivers.

DDT was banned in the U.S. in the early 1970s after decades of widespread use. Studies indicated that DDT and DDE contribute to eggshell thinning in several bird species and are toxic to fish, shellfish and other organisms. In mammals, these compounds can cause gene disruption and interfere with hormone function, particularly in a developing fetus.

Dieldrin was used extensively to kill crop pests, termites and mosquitoes before it was banned in 1987 in the U.S. Its use in the Midwest agricultural belt was particularly pronounced. Before these compounds were banned, U.S. farmers applied more than 15 million pounds of dieldrin and aldrin (its parent compound) to their crops every year – much of it in the Midwest.

“Some studies (of dieldrin) exposure find links to cancer, Parkinson’s disease and Alzheimer’s and some do not,” Carpenter said. “But perhaps most concerning is that both dieldrin and PCBs can act as developmental neurotoxicants, meaning that developing fetuses can be harmed at concentrations much smaller than those that can impact the health of adults.”

Concentrations of contaminants in river otters ranged widely. One male had a concentration of PCBs in its liver of 3,450 parts per billion (ppb), while another had only 30 ppb. Dieldrin concentrations ranged from 14.4 to 534 ppb.

Since the otters were collected from counties all over Central Illinois, the findings could indicate that some watersheds have a worse contamination problem than others, Carpenter said.

“For many of the contaminants we did detect a large range,” she said. “This is a red flag. We need to understand more about what humans and wildlife are being exposed to in different watersheds.”

More research is needed to understand the factors that contribute to the river otters’ exposure to these chemicals, Mateus-Pinilla said.

“We don’t have a good understanding of how much time they spend in a particular area, how long they stay there, how far they go or where they spend most of their time during the winter versus the summer,” she said. “All of these can contribute to differences in exposure.”

The researchers do not know why the male otters in the study carried a heavier burden of PCBs than the females, Carpenter said. It may be simply that the males are larger. They may range further than the females, picking up more toxins as they go. Or the females might transfer some of the contaminants to their offspring during nursing, as previous research suggests.

“Maternal transfer is particularly interesting,” Novakofski said. “In some watersheds humans may have the same kind of risk because they’re eating the same kinds of fish that the otters might be.”

Studies have shown that PCBs and dieldrin can be transferred through breast milk, he said.

“We don’t know enough about how these contaminants behave synergistically,” Carpenter said, especially since “the cocktail of contaminants that we’re exposed to here in the Midwest differs from what humans and wildlife are exposed to in eastern or western North America.”

The research team also included Illinois pathobiology professor Kuldeep Singh, Robert Bluett of the Illinois Department of Natural Resources, and Damian Satterthwaite-Phillips and Nelda Rivera, both of the natural history survey. The INHS is a division of the Prairie Research Institute at the U. of I.