Researchers have developed an updated model for determining whether discovered planets fall within a habitable zone – where they could be capable of having liquid water and thus sustaining life.

Researchers searching the galaxy for planets that could pass the litmus test of sustaining water-based life must find whether those planets fall in what’s known as a habitable zone. New work, led by a team of Penn State researchers, will help scientists in that search.

Using the latest data, the Penn State Department of Geosciences team developed an updated model for determining whether discovered planets fall within a habitable zone – where they could be capable of having liquid water and thus sustaining life. The work, described in a paper accepted for publication in Astrophysical Journal, builds on a prior model by James Kasting, Evan Pugh Professor of Geosciences at Penn State, to offer a more precise calculation of where habitable zones around a star can be found. 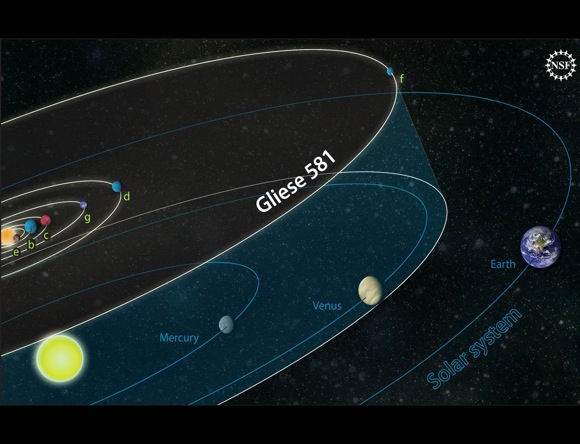 A comparison of planetary orbits between our solar system and the Gliese 581 system. Image Credit: National Science Foundation/Zina Deretsky

Comparing the new estimates with the previous model, the team found that habitable zones are actually farther away from the stars than previously thought.

“This has implications for finding other planets with life on them,” said post-doctoral researcher Ravi Kumar Kopparapu, a lead investigator on the study.

For the paper, Kopparapu and graduate student Ramses Ramirez used updated absorption databases of greenhouse gases (HITRAN and HITEMP). The databases have more accurate information on water and carbon dioxide than previously was available and allowed the research team to build new estimates from the groundbreaking model Kasting created 20 years ago for other stars.

Using that data and super computers at Penn State and the University of Washington, the team was able to calculate habitable zones around other stars. In the previous model, water and carbon dioxide were not being absorbed as strongly, so the planets had to be closer to the star to be in the habitable zone. 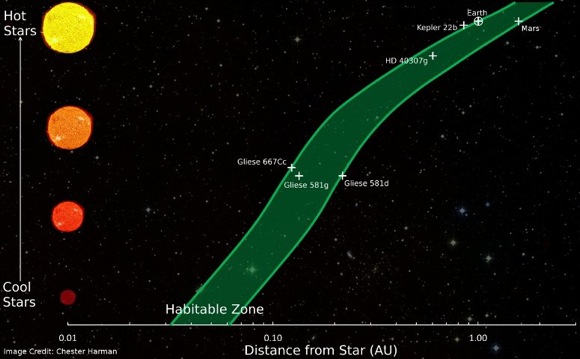 The graphic shows habitable zone distances around various types of stars. Some of the known extrasolar planets that are considered to be in the habitable zone of their stars are also shown. On this scale, Earth-Sun distance is 1 astronomical unit, which is roughly 150 million kilometers. Credit: Chester Herman

The new model has already found that some extrasolar planets previously believed to be in habitable zones may, in fact, not be.

The new model could also help scientists with research that is already under way. For example, the model could be used to see if planets the NASA Kepler mission discovers are within a habitable zone. The Kepler mission has found more than 2,000 potential systems that could be investigated.

The data could assist with the Habitable Zone Planet Finder that a team of scientists in the Department of Astronomy and Astrophysics in Penn State’s Eberly College of Science is building. In 2011, that team received a National Science Foundation grant to develop an instrument to find planets in habitable zones. The precision spectrograph, which is under construction, will help scientists find Earth-sized planets in the Milky Way that could sustain liquid water.

In the future, the model could also be useful for research done with Terrestrial Planet Finder telescopes, which would guide users of the supersized telescopes on where to look.

While in the new model, Earth appears to be situated at the very edge of the habitable zone, the model doesn’t take into account feedback from clouds, which reflect radiation away from the earth and stabilize the climate.