Scientists say the hypergiant yellow star is absolutely huge, one of the ten largest stars found so far. It’s 1,300 times the diameter of the sun and about a million times brighter. 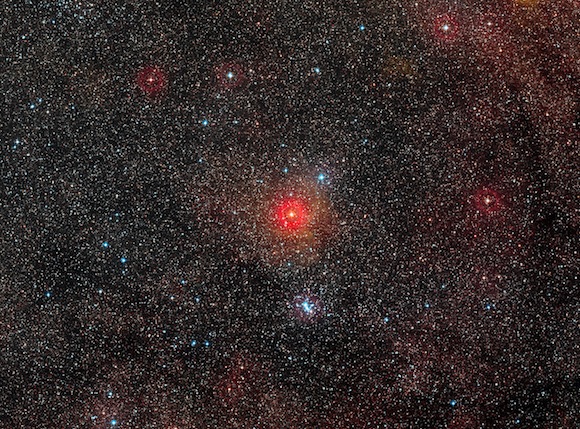 Using ESO’s Very Large Telescope Interferometer (VLTI), an international team of scientists have found that the yellow hypergiant star HR 5171 A is absolutely huge — 1,300 times the diameter of the sun and much bigger than was expected. This makes it the largest yellow star known. It is also in the top ten of the largest stars known — 50% larger than the famous red supergiant Betelgeuse — and about one million times brighter than the sun.

The new observations also showed that this star has a very close binary partner, which was a real surprise. The two stars are so close that they touch and the whole system resembles a gigantic peanut.

Yellow hypergiants are very rare, with only a dozen or so known in our galaxy — the best-known example being Rho Cassiopeiae. They are among the biggest and brightest stars known and are at a stage of their lives when they are unstable and changing rapidly. Due to this instability, yellow hypergiants also expel material outwards, forming a large, extended atmosphere around the star. 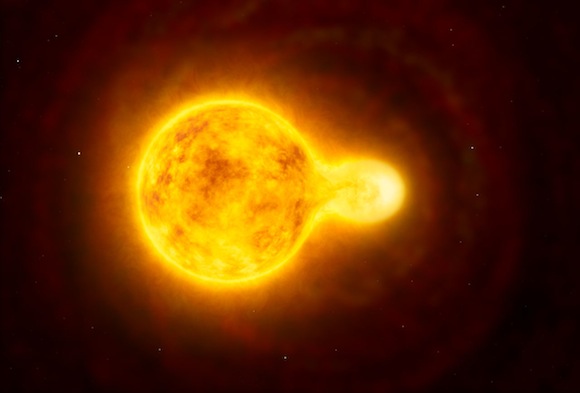 This artist’s impression shows the yellow hypergiant star HR 5171. This is a very rare type of star with only a dozen known in our galaxy. Observations with ESO’s Very Large Telescope Interferometer have shown that it is actually a double star, with the companion in contact with the main star. Image credit: ESO

Despite its great distance of nearly 12,000 light years from Earth, the object can just about be seen with the naked eye by the keen-sighted. HR 5171 A has been found to be getting bigger over the last 40 years, cooling as it grows, and its evolution has now been caught in action. Only a few stars are caught in this very brief phase, where they undergo a dramatic change in temperature as they rapidly evolve.