How sustainable is Switzerland?

Even though technology has become more efficient and little stands in the way of a sustainable lifestyle, a new study shows, that even the Swiss are a long way from a 2,000 watt society.

The vision of a society in which each inhabitant of the earth manages to consume only 2000 watts has already been around for 15 years. During this time, there has been a steady increase in environmental awareness in the West. Technology has become more efficient and there appears to be very little standing in the way of a sustainable lifestyle. However, as a study by Empa and the Federal Institute of Technology (ETH) Zurich now shows, Mr and Mrs Swiss are still a long way from achieving this. 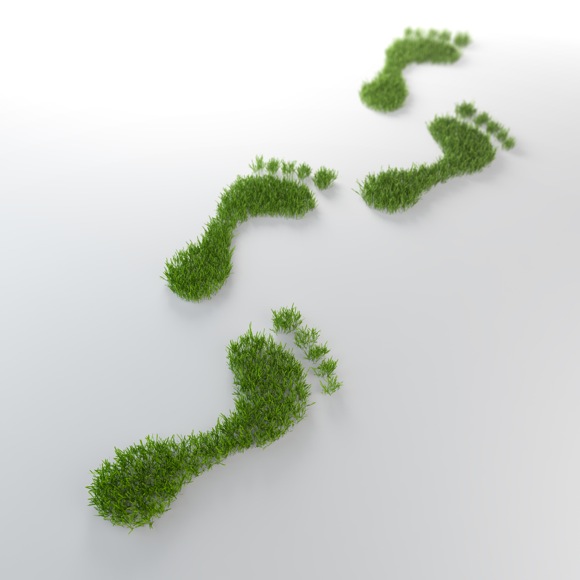 In 1998, researchers at the ETH Zurich developed an energy policy model that could provide energy for a growing world population and at the same time protect the environment. Through the use of efficient technologies and processes, the industrialised countries should reduce their energy consumption to 2000 watts per inhabitant – the global average. The resources freed up could then help to combat poverty and hunger worldwide, without a reduction in living standards for the Western countries. The city of Basel has been acting as a pilot region and, in 2008, the residents of Zurich expressed themselves through the ballot box in favour of striving for a 2000-watt society. At the same time as reducing electricity consumption, the aim is also to reduce emissions of greenhouse gases to the equivalent of one ton of CO2 per person per year.

Current per capita energy consumption in Switzerland meanwhile still exceeds the target for sustainability significantly, as the annual energy statistics from the Federal Office for the Environment (BAFU) show. However, such statistics use a “top-down” approach: they divide total consumption by the number of inhabitants. Dominic Notter and Hans-Jörg Althaus from Empa and Reto Meyer from the ETH Zurich therefore carried out a study which considers the environmental footprint of Switzerland “bottom-up”, i.e. based on the individual. The researchers were hoping to find households that already meet the criteria of the 2000-watt and/or 1-ton CO2 society. These examples could then be used to derive pioneering strategies for sustainability. The results of the study were published in the peer review scientific journal “Environmental Science & Technology”.

Through a combination of survey and lifestyle analysis, the researchers gained a uniquely detailed view into the different lifestyles of the Swiss population. 3369 households answered questions on living, transport, food and consumer goods. With the help of the “ecoinvent” database, which is administered by Empa, the researchers calculated the individual energy consumption, along with the resulting greenhouse gas emissions and the overall impact of each household on the environment. 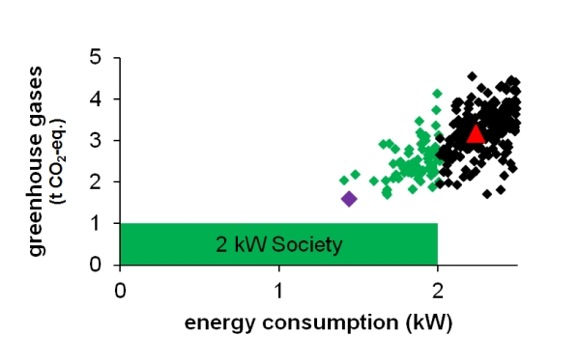 Not a single household surveyed met the conditions of the 2000-watt society completely: even energy-efficient people produced too much CO2 emissions. The lowest individual value and the average of the most sustainable 10% of those surveyed are labelled.

Western lifestyle and the 2000-watt society – a contradiction?

The results were sobering: of 3369 households surveyed, not a single one met the conditions of the 2000-watt society. The economic theory that environmental impact increases with rising incomes and then decreases again was also not confirmed. Although it is true that energy consumption, emissions and environmental pollution do increase linearly with income, no reduction takes place (at even higher incomes).
Energy consumption among the households surveyed ranged from an “exemplary” 1400 watts per person to 20,000 watts – ten times the target value – with the average being 4200 watts. Overall, only two percent of those surveyed were below the 2000-watt threshold – and even they emitted far more than one ton of CO2. However, what is significant is that these low-energy households are found in every income bracket. If households with an above-average income only consume 2 kW of energy, the goal of a 2000-watt society is achievable: low energy consumption is possible with a high standard of living.

Around a quarter of the energy is consumed as electricity – therefore a massive reduction in overall consumption cannot be achieved simply by using more energy-efficient appliances. This is because a large part of the energy goes into heating and transport. The low-energy households scored particularly well in precisely these categories. Thus, the heated area per person was small and the heating requirement was relatively low. In terms of transport, such households were likewise very restrained: they limited themselves in terms of the amount of car driving and flying they did. 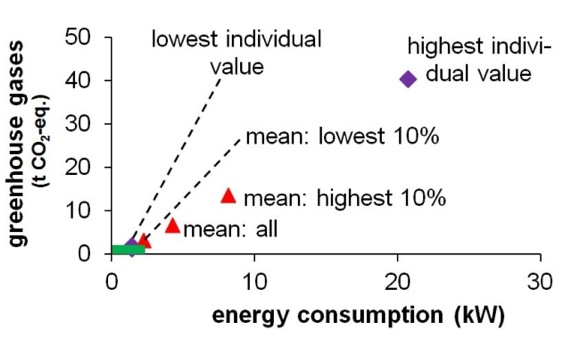 Although the average environmental impact of those surveyed is relatively low, it exceeds the guideline of the 2000-watt society by several times. The highest recorded energy consumption is even ten times higher than the recommended level.

It is thus in the area of living and transport behaviour that researchers see the most potential for improvement. Even in low-energy households, the heated area per person is too large. Transport, particularly by car and plane, accounts for almost half the greenhouse gas emissions and causes serious environmental pollution: the sources of energy used in this area are primarily fossil fuels.

Doing without is unavoidable

Researchers believe that the transformation of our society into a sustainable 2000-watt society is possible – but only with “the greatest possible effort”. However, reducing greenhouse gas emissions is far more difficult. For this, Switzerland would have to obtain 80 percent of its total energy from low-carbon sources. With the closure of the nuclear power stations, this means renewable energies – and not just for electricity, but also for heating and transport. This would require major technical advances – and a change in lifestyle, according to the study.

The ambitious sustainability target is only achievable if individuals and the state strive towards a sustainability strategy together. This calls for action such as intelligent town planning that reduces the need for travel and political measures that promote environmentally friendly behaviour. A sustainable lifestyle is characterised by frugality, so although we can maintain our quality of life, it is necessary to forego extravagance. By living in a smaller heated area, limiting the use of transport and avoiding excessive consumption of goods and services, according to Notter, everyone could do their bit for sustainability.