Scott Hubbard, a consulting professor of aeronautics and astronautics, explains how NASA might bring the planet-hunting spacecraft back online.

NASA officials announced Wednesday, May 15, that the Kepler space telescope – the agency’s primary instrument for detecting planets beyond our solar system – had suffered a critical failure and could soon be shut down permanently.

Scott Hubbard, a consulting professor of aeronautics and astronautics at Stanford’s School of Engineering, served as director of NASA Ames Research Center during much of the building phase of the Kepler space telescope. He also worked on the project alongside William Borucki, the Kepler science principal investigator at Ames and the driving force behind the effort, for the decades leading up to formal approval of the mission.

The Kepler spacecraft’s photo-detector array registers more than 100,000 stars at a time, Hubbard said, and in order to detect exoplanets (planets orbiting stars outside our solar system), the telescope must remain extremely steady so that the stars do not wander across the optics. A series of four gyroscope-like reaction wheels whir within the telescope to hold its gaze. At least three must be functioning to keep Kepler stable. One failed about a year ago and was shut off, and NASA scientists announced Wednesday, May 15, that a second wheel was no longer operating and that Kepler had paused operations. 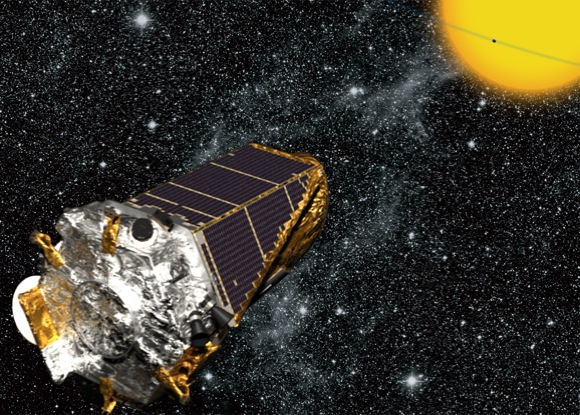 In a conversation with Stanford News Service, Hubbard explained the possible ways that NASA could bring the spacecraft back online, and what planet hunters will do next if that’s not possible.

How big of a loss will it be if the Kepler space telescope can’t be repaired?

The science returns of the Kepler mission have been staggering and have changed our view of the universe, in that we now think there are planets just about everywhere.

It will be very sad if it can’t go on any longer, but the taxpayers did get their money’s worth. Kepler has, so far, detected more than 2,700 candidate exoplanets orbiting distant stars, including many Earth-size planets that are within their star’s habitable zone, where water could exist in liquid form.

Kepler has done what the program managers said it would do, and that is to give us an inventory of extrasolar planets. It completed its primary observation phase, and had entered its extended science phase. We’re already in the gravy train period – there’s still a year and a half’s worth of data in the pipeline that scientists will analyze to identify other candidate planets, and there will continue to be Kepler science discoveries for quite some time.

How might NASA engineers go about getting Kepler functional again?

There are two possible ways to salvage the spacecraft that I’m aware of. One is that they could try turning back on the reaction wheel that they shut off a year ago. It was putting metal on metal, and the friction was interfering with its operation, so you could see if the lubricant that is in there, having sat quietly, has redistributed itself, and maybe it will work.

The other scheme, and this has never been tried, involves using thrusters and the solar pressure exerted on the solar panels to try and act as a third reaction wheel and provide additional pointing stability. I haven’t investigated it, but my impression is that it would require sending a lot more operational commands to the spacecraft.

If neither of these options works, Kepler is still an amazing space instrument. Could it conduct other types of experiments?

People have asked about using it to find near-Earth objects, or asteroids. Kepler carries a photometer, not a camera, that looks at the brightness of stars, and so its optics deliberately defocus light from stars to create a nice spread of light on the detector, which is not ideal for spotting asteroids.

Whether or not it could function as a detector for asteroids is something that would have to be studied, but since it wasn’t built as a camera, I would say that I’m skeptical. That said, certainly between Ames Research Center and the Jet Propulsion Laboratory, they’ve got the best people in the world working on it.

What’s next for exoplanet hunters?

As I said earlier, there is still a year and a half’s worth of data in the pipeline to analyze to identify candidate planets, so there are still discoveries to be made.

It’s important to make clear, though, that in the original queue of missions aimed at finding life elsewhere, a mission like Kepler was a survey mission to establish the statistical frequency of whether these planets are rare or common. It lived the length of its prime mission, and was extremely successful during that time at achieving this goal. It has paved the way for additional missions, such as TESS – Transiting Exoplanet Survey Satellite – and TPF – Terrestrial Planet Finder – which will continue the search for Earth-like exoplanets in the near future.