How birds got their wings

Birds split from dinosaurs when their front limbs got longer and their back limbs got shorter, according to new research.

This change may have been critical in allowing early birds to evolve flight, and then to exploit the forest canopy, the authors conclude.

Birds originated from a group of small, meat-eating theropod dinosaurs called maniraptorans sometime around 150 million years ago. Recent findings from around the world show that many maniraptorans were very bird-like, with feathers, hollow bones, small body sizes, and high metabolic rates.

But the question remains, at what point did forelimbs evolve into wings—making it possible to fly? 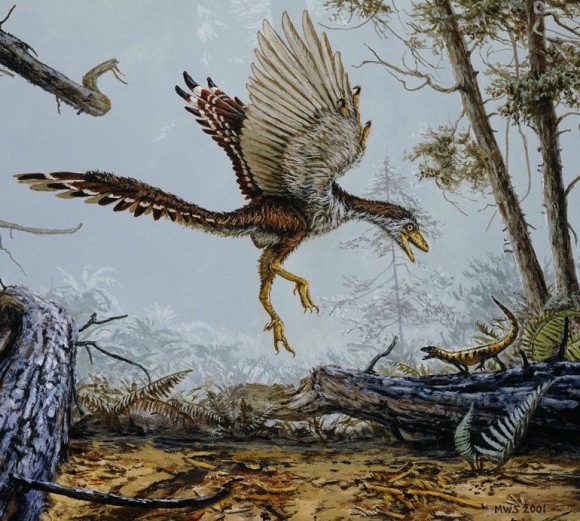 McGill University professor Hans Larsson and a former graduate student Alexander Dececchi set out to answer that question by examining fossil data, greatly expanded in recent years, from the period marking the origin of birds.

In a study published in the September issue of Evolution, Larsson and Dececchi find that throughout most of the history of carnivorous dinosaurs, limb lengths showed a relatively stable scaling relationship to body size. This is despite a 5000-fold difference in mass between Tyrannosaurus rex and the smallest feathered theropods from China.

As forelimbs lengthened, they became long enough to serve as an airfoil, allowing for the evolution of powered flight. When coupled with the shrinking of the hind limbs, this helped refine flight control and efficiency in early birds.

Shorter legs would have aided in reducing drag during flight—the reason modern birds tuck their legs as they fly—and also in perching and moving about on small branches in trees.

This combination of better wings with more compact legs would have been critical for the survival of birds in a time when another group of flying reptiles, the pterosaurs, dominated the skies and competed for food.

“Our findings suggest that birds underwent an abrupt change in their developmental mechanisms, such that their forelimbs and hind limbs became subject to different length controls,” says Larsson, chair in macroevolution at McGill’s Redpath Museum.

Deviations from the rules of how an animal’s limbs scale with changes in body size—another example is the relatively long legs and short arms of humans—usually indicate some major shift in function or behavior. “This decoupling may be fundamental to the success of birds, the most diverse class of land vertebrates on Earth today.”

“The origin of birds and powered flight is a classic major evolutionary transition,” says Dececchi, now a postdoctoral researcher at the University of South Dakota.

“Our findings suggest that the limb lengths of birds had to be dissociated from general body size before they could radiate so successfully. It may be that this fact is what allowed them to become more than just another lineage of maniraptorans and led them to expand to the wide range of limb shapes and sizes present in today’s birds.”

“This work, coupled with our previous findings that the ancestors of birds were not tree dwellers, does much to illuminate the ecology of bird antecedents,” says Dececchi. “Knowing where birds came from, and how they got to where they are now, is crucial for understanding how the modern world came to look the way it is.”