A team of archaeologists from the University of York are to travel to the roof of the world to discover, survey, and record mountain archaeology in the Nepalese Himalayas.

The Himalayan Exploration and Archaeological Research Team (HEART) will spend four weeks documenting high-altitude artefact scatters, rock shelters and formerly inhabited hand-cut cave systems that were used either as settlements and tombs dating back to the 3rd century BC.

The five-strong team, led by Dr Hayley Saul, of the Department of Archaeology at York, will be based in the Mustang valley in the Annapurna massif where they will use digital 3D imaging to survey and record the features as part of a new initiative to piece together the prehistory of the high Himalayas. 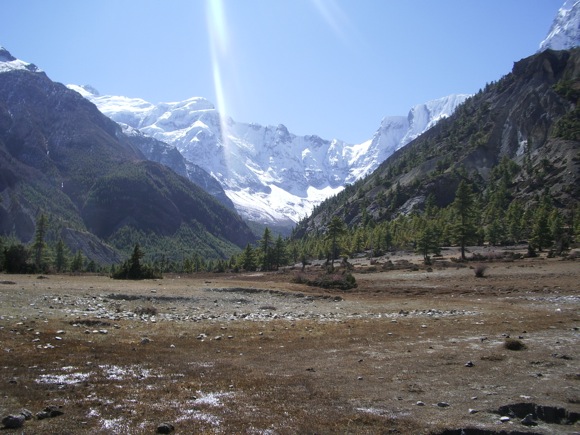 The HEART team will fieldwalk and survey several high altitude plateau, such as this one, for scatters of artefacts that could suggest below-ground settlement. Credit: York University

They will also trace the way mountain cultures have occupied and adapted to the landscape through time, seeking to set Himalayan archaeology in a broader global framework. This will include the role of the region in the development of the domestic cultivation of rice, a historical perspective on mountain resource exploitation, and the spread of Buddhism.

Dr Saul says: “Despite the fact that a lot of important processes, such as the domestication and movements of many plants, converge on this area very little is known about its pre-history.”

Following a reconnaissance expedition in 2011, she realised that many archaeological remains in the dessicated environment of the high mountains while well-preserved, remain unrecorded and undated,

Dr Saul adds: “There is potential that these remains could contribute hugely to our understanding of significant prehistoric events. We shall keep interference of remains to a minimum and seek to involve local people in our work.”

The HEART team comprises Dr Cath Neal and Dr Suzi Richer of the Department of Archaeology at York, and York Archaeology graduates Jim Williams and James Kilroy. You can follow their progress on Facebook.

As well as the archaeological investigations, the team is working in association with a charity Community Action Nepal, which was founded by the mountaineer Doug Scott, to develop heritage-based initiatives to stimulate local economies in the mountains. 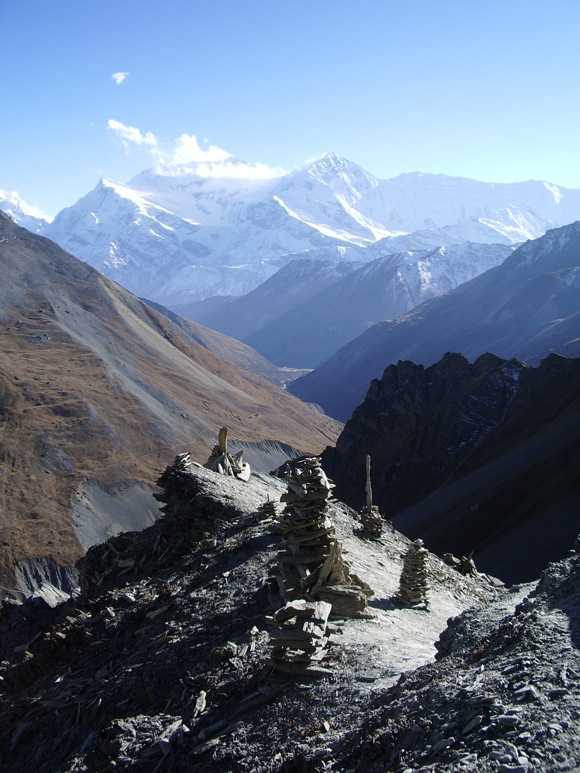 The team must climb to an altitude of nearly 5500m, higher than the summit of Mt Blanc, with packs laden with survey and climbing equipment. Here, the view from the last camp before the high pass of Thorung La. Credit: York University

They aim to work with Community Action Nepal and NGOs to use archaeological fieldwork and heritage as a vehicle to stimulate positive economic development and to create a repository of mountain peoples’ heritage, with an accessible digital archive. They also plan to promote modern Himalayan arts and crafts in the UK.

HEART plans to stage an exhibition of archaeology and Nepalese art, including indigenous crafts and Tibetan Thanka art, in York and London in autumn 2013. The exhibition will also include artwork from children based at the Bahrabise school for the deaf. All profits go to Thanka art schools in Kathmandu and Bahrabise.

The York exhibition will coincide with a lecture in the city by Doug Scott on his mountaineering exploits including his first ascent of the south-west face of Everest.

At the conclusion of the research project, Dr Saul will visit schools in the Helambu region to teach archaeology. She will also visit monuments in Langtang, including a 500 year old gompa , a Buddhist monastery, which are in need of conservation.

Via The University of York