Social animals usually congregate for protection or mating or to capture bigger prey, but a University of California, Berkeley, biologist has found that the terrestrial hermit crab has a more self-serving social agenda: to kick another crab out of its shell and move into a larger home.

Social animals usually congregate for protection or mating or to capture bigger prey, but a University of California, Berkeley, biologist has found that the terrestrial hermit crab has a more self-serving social agenda: to kick another crab out of its shell and move into a larger home.

All hermit crabs appropriate abandoned snail shells for their homes, but the dozen or so species of land-based hermit crabs – popular terrarium pets – are the only ones that hollow out and remodel their shells, sometimes doubling the internal volume. This provides more room to grow, more room for eggs – sometimes a thousand more eggs – and a lighter home to lug around as they forage.

But empty snail shells are rare on land, so the best hope of moving to a new home is to kick others out of their remodeled shells, said Mark Laidre, a UC Berkeley Miller Post-Doctoral Fellow who reported this unusual behavior in this month’s issue of the journal Current Biology. 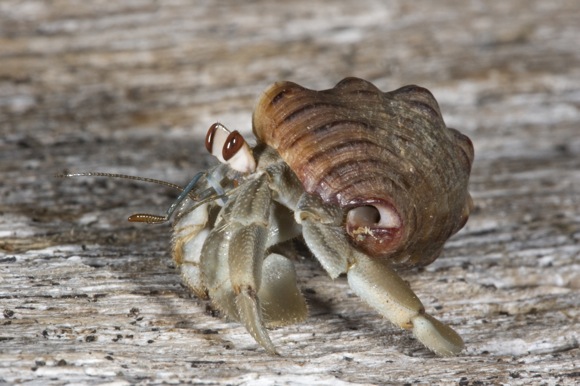 The terrestrial hermit crab Coenobita compressus lives inside a discarded snail shell and forages for plants and carrion along the Pacific coast from Mexico to Peru. Image Credit: Mark Laidre, UC Berkeley

When three or more terrestrial hermit crabs congregate, they quickly attract dozens of others eager to trade up. They typically form a conga line, smallest to largest, each holding onto the crab in front of it, and, once a hapless crab is wrenched from its shell, simultaneously move into larger shells.

“The one that gets yanked out of its shell is often left with the smallest shell, which it can’t really protect itself with,” said Laidre, who is in the Department of Integrative Biology. “Then it’s liable to be eaten by anything. For hermit crabs, it’s really their sociality that drives predation.” 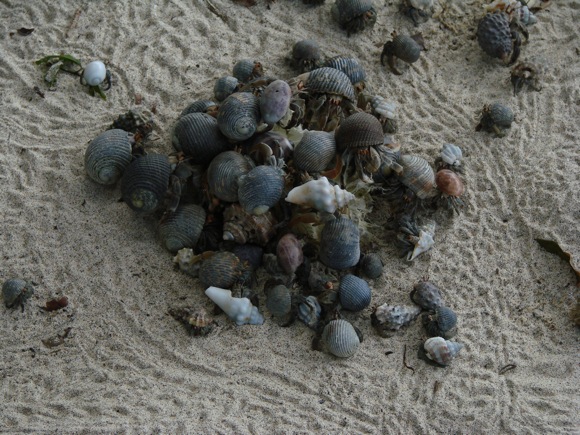 Laidre says the crabs’ unusual behavior is a rare example of how evolving to take advantage of a specialized niche – in this case, land versus ocean – led to an unexpected byproduct: socialization in a typically solitary animal.

“No matter how exactly the hermit tenants modify their shellters, they exemplify an important, if obvious, evolutionary truth: living things have been altering and remodeling their surroundings throughout the history of life,” wrote UC Davis evolutionary biologist Geerat J. Vermeij in a commentary in the same journal. For decades, Vermeij has studied how animals’ behavior affects their own evolution – what biologists term “niche construction” – as opposed to the well-known Darwinian idea that the environment affects evolution through natural selection.

“Organisms are not just passive pawns subjected to the selective whims of enemies and allies, but active participants in creating and modifying their internal as well as their external conditions of life,” Vermeij concluded.

Laidre conducted his studies on the Pacific shore of Costa Rica, where the hermit crab Coenobita compressus can be found by the millions along tropical beaches. He tethered individual crabs, the largest about three inches long, to a post and monitored the free-for-all that typically appeared within 10-15 minutes.

Most of the 800 or so species of hermit crab live in the ocean, where empty snail shells are common because of the prevalence of predators like shell-crushing crabs with wrench-like pincers, snail-eating puffer fish and stomatopods, which have the fastest and most destructive punch of any predator. 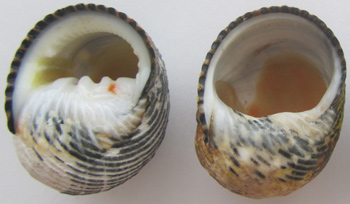 A marine snail shell newly vacated by its gastropod owner (left) and a shell that has been remodeled by a hermit crab. Image Credit: Mark Laidre, UC Berkeley

On land, however, the only shells available come from marine snails tossed ashore by waves. Their rarity and the fact that few land predators can break open these shells to get at the hermit crab may have led the crabs to remodel the shells to make them lighter and more spacious, Laidre said.

The importance of remodeled shells became evident after an experiment in which he pulled crabs from their homes and instead offered them newly vacated snail shells. None survived. Apparently, he said, only the smallest hermit crabs take advantage of new shells, since only the small hermit crabs can fit inside the unremodeled shells. Even if a crab can fit inside the shell, it still must expend time and energy to hollow it out, and this is something hermit crabs of all sizes would prefer to avoid if possible.